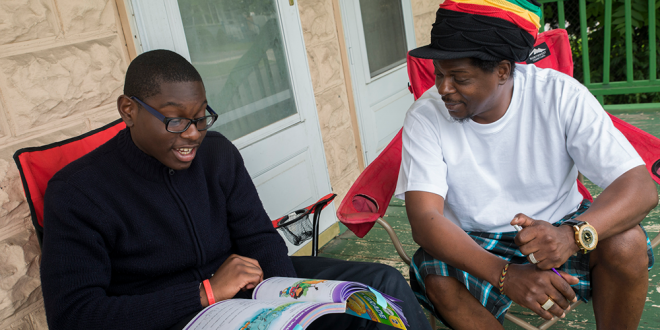 After the series launch in March, we received a number of nominations and decided to conduct several Q&As in order to spotlight all the great fathers who were nominated. 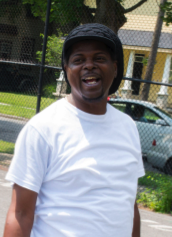 Southside Academy Charter School teacher Danielle Gerard nominated Darrenton Heath and said “if more of our students had a parent like Mr. Heath in their corner initiating a desire to learn and achieve an education, the South Side community would be known for developing world renowned scholars.” Learn more about Heath below and pick up a copy of our September print issue to meet the other nominated fathers.

Q: What did it feel like when you became a father?
A: It was a joy. And a blessing for my second because my mother passed away, and next she was pregnant. They say ‘when one goes, one comes’ and that’s exactly how it was.

Q: Tell me about your sons.
A: Diamond, 26, is my oldest. He lives in Jamaica and is in school for plumbing. Royalty, 14, attends Southside Charter Academy and is finishing up summer school.

Q: What was your relationship like with your father?
A: My father was more of the disciplinarian. We saw him basically when it came time to discipline. And we’re talking about old-fashioned discipline, so a lot of times, your bottom was sore the next day. When I was in my 20s, that’s when me and my father connected more.

Q: Why are fathers important?
A: It’s a hell of a job but a good job. Because what you instill in him is what will come out and that’s the part I like. They’re young and their minds are like sponges, and if you fill it with good things, good things will come out.

Q: Is there a saying or advice you always give?
A: I always emphasize the importance of respect. I think we must teach children respect. That is what I feel is gone today with this younger generation – Respect. And like I say it starts at home. If you teach your kids to say thank you and please at home, when he goes out into the street, he will say thank you and please.

Q: What do you think about assumptions held about Black fathers?
A: There are a few good men out there. A few outstanding fathers. I feel most just need to be more into their child’s life. A lot of times, people have a child and maybe the relationship doesn’t work out, you still have a child to raise. If it doesn’t work out, you still need to communicate with that person on any type of means just to keep that child on the right path. Because without that, it could easily be led astray. Streets are so welcoming to a kids’ eye. It’s like another home outside a kid’s home and it entices them. When I was young, that’s what enticed me – the streets.

Q: As a father, is there anything you do that would surprise people?
A: The rule on school nights in our house is no TV. I decided against it because I’ve noticed that kids are now actually being raised by television. Parents are quick to say go in your room and watch TV. But you cannot leave your kid in a room now with cable TV. You have interact with your kids and see what they’re watching.

Q: Any advice for other dads?
A: Talk to your child, listen to them. Physical discipline doesn’t really do nothing. When you take away a toy or something they like the most, that will cut them worser. It’s like you cut a main artery.

For more on Darrenton and his son Royalty’s study routine, read the feature in the September print issue of The Stand.