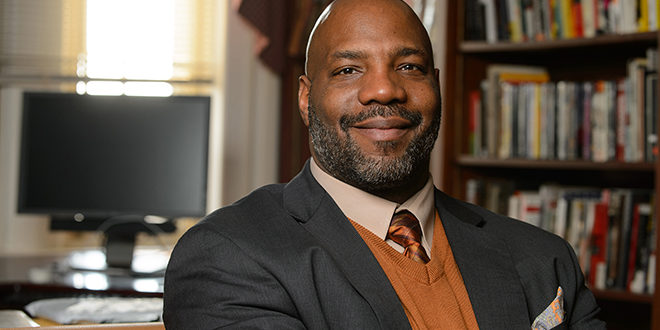 In honor of Black History Month, Hendricks Chapel hosted a commemorative event Feb. 11 featuring African-American public intellectual Jelani Cobb, who was described as “one of today’s most astute observers of race, history, politics and culture in America” by the media release for the function.

While an undergraduate at Howard University in the District of Columbia, Cobb added “Jelani” to his name. This Swahili word translates to “powerful.” He then moved to Rutgers University in New Jersey,  where he received his doctorate in history. Five years ago he was hired by the influential magazine The  New Yorker to serve as a staff writer.

The event, under the rubric of “Race, Politics and the News,” attracted approximately 150 people, including faculty, student and community members to the chapel. It took the format of a conversation, first, between Cobb and a colleague of his, Jeffrey Gonda, a history professor at Syracuse University. After this, attendees were welcomed to join the exchange.

Fittingly, the dialogue turned to the connection between history and journalism. Gonda suggested that  having a historical perspective gives Cobb an advantage while commenting for a widely read magazine.

He went on to criticize highfalutin journalists who write over the heads of their intended readerships.

“This is just kind of bad writing being passed off as profundity.”

The current polarization and divisiveness of American politics has been the subject of books such as “How Democracies Die” by Steven Levitsky and Daniel Ziblatt. When this topic was brought up by Gonda, Cobb replied, “We don’t think enough about the perniciousness of this antagonistic and  factional environment.”

Camila Grigera Naon, vice president of the National Association of Hispanic Journalists at SU, asked Cobb, “How do you stay above water with so much bad news happening right now?”

“I try to fight in my own terms,” Cobb answered. “I advise you to remain focused on the thing that  you can do.”

He also commented on the issue of propaganda, media bias and fake news, which outlets such as the RT television channel — formerly known as Russia Today — and the Sputnik news agency have been accused by their adversaries of being engaged in.

“The Russian objective is simply to wear you down by overloading you with information,” Cobb said.

He also lamented what he described as “the institutionalization of racism in immigration policy.”


Then, Gonda asked Cobb, “What makes you hopeful?”


“What we learned in the African-American struggles now is that we are bigger than the struggles in front of us,” Cobb said. “Change is possible, but I think it is not simple. It doesn’t come to us  automatically. It comes from the willingness of the people to get out in the streets and work for change as part of a social justice movement.”


Biko Mandela Gray, a religion professor at SU, reacted to Cobb’s remarks by praising him for his “prophetic voice and ability and willingness to speak truth to power.”