Recent I-81 Meeting Focused on Impact on Housing

The redesign of Interstate 81 as an opportunity for Syracuse neighbors was a recurring topic at a public forum put together by the Moving People Transportation Coalition on Aug. 19.

“This opportunity could be a transformative time for our city,” said Bob Haley, co-director of the Urban Design Center. “It’s time for residents to reach consensus.”

David Paccone, director of policy at the Syracuse Housing Authority (SHA), was more specific on his understanding of opportunity. “Many of the family members living in SHA property abutting I-81 work at Syracuse University, the College of Environmental Science and Forestry, the Upstate Medical University and the Veteran Affairs Medical Center,” he said.  “The reconstruction of the I-81 viaduct could give the families the opportunity to change neighborhoods.”

The forum was held in the Curtin Auditorium of the Robert Kinchen Central Library at 447 S. Salina St. and it featured a panel discussion moderated by Sharon Sherman, executive director of the Greater Syracuse Tenants Network, plus a question-and-answer session. Besides Haley and Paccone, the panelists were Sharon Owens, head of the Syracuse Model Neighborhood Facility; Kenyon Craig, chief executive of Housing Visions Unlimited, and; Peter Sarver, member of the Alliance of Communities Transforming Syracuse’s Leadership Council. 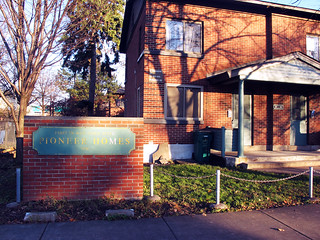 A substantial amount of the hour-and-a-half allocated for the meeting was devoted to discuss the situation of three specific South Side neighborhoods: Pioneer Homes, the Midland-Lincoln-Bellevue area and the South Salina corridor.

Paccone expressed concern that the potential dislocation of people residing in Pioneer Homes and surrounding areas could have a negative impact on the job situation of those of them working in the University Hill area. Then he shifted his attention to Lincoln Avenue and Midland Avenue, where, he said, 11 single-family homes were built in vacant lots, and, subsequently, a similar number of house rehabilitation applications were filed by neighborhood landlords in City Hall.

Haley, an architect, talked about a segment of the South Salina corridor known as the South East Gateway Neighborhood, which is a rectangle bounded roughly by New Street, Oakwood Avenue, Martin Luther King Street and Oneida Street. He said that his design center prepared a development plan for the City of Syracuse in 2006.

“The plan envisions turning the rectangle into a walkable neighborhood with food chain grocery stores,” he added. “Despite having been embraced by the South East Gateway business community, the project is still hypothetical. It hasn’t advanced past architectural concepts and images.”

Owens concurred with Haley. “The South East Gateway Commercial Center has been in the books for years,” she said. “In City Hall, there are shelves of development plans that need to be dusted off.”

Both Haley and Owens hailed the South East Gateway Neighborhood design plan as an example of mixed-use, mixed-income housing.

Owens said: “Mixed-income housing is housing built for people of different socioeconomic levels. In it, also commercial and housing units are combined. This empowers communities. If we concentrate poverty in a neighborhood, this concentrates crime and concentrates hopelessness in this same neighborhood. This is a detriment to the community. I have seen people who keep struggling with demons because their lives are changing but their environments are not changing.”

Sherman warned about abuses of mixed-income housing subsidies granted to developers by city governments. “In New York City, a developer got tax credits from Mayor Bloomberg to build mixed-income housing,” she said. “But the developer built a separate door and elevator for the poor people. This poor door perpetuated  segregation, even in a supposedly mixed-income building.”

The community can continue to voice comments on the
I-81 Viaduct Project through Sept. 2.
Visit here to submit an online comment.