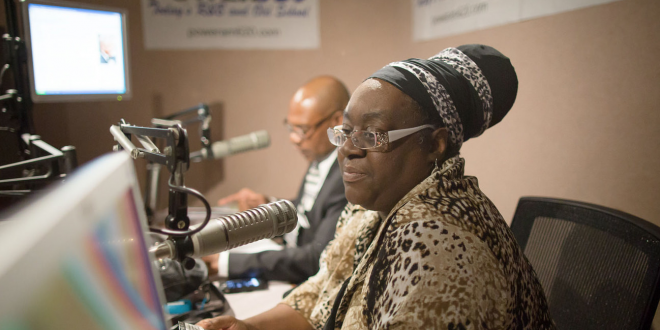 When South Side resident Brenda Muhammad enrolled in the Documentary Film & History graduate program at Syracuse University, her goal wasn’t to obtain a job in the field or increase her chances of advancing her career. 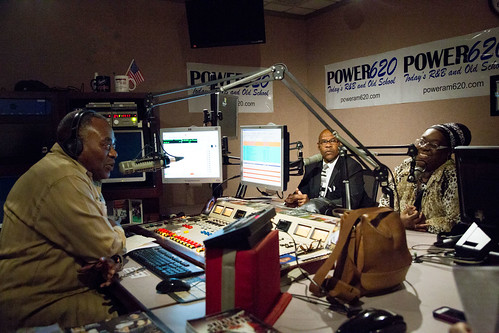 Dr. Rick Wright invited Brenda Muhammad and her husband Keith Muhammad to his “Old Skool Sunday” radio show on Power AM 620 in Syracuse. Brenda talked about her project and called for listeners who attended the original Million Man March to reach out to her. | Photo by Kathy Hua

At 52, Muhammad does not fit the traditional profile of a master’s student in the S.I. Newhouse School of Public Communications, where many students are fresh out of undergrad. For her culminating project in the program, Muhammad is documenting the 20th anniversary of the Million Man March taking place this month in Washington, D.C. She plans to give it a local spin by profiling local individuals who attended the original march or are traveling to the event taking place Oct. 10.

“I’m into preserving stories, events, locations and things that have to do with cultural heritage preservation,” she said. “This fits that. It’s a historical event, a cultural event and it’s needed.”

Muhammad also has a few personal connections to the march: her husband, Keith Muhammad, attended the original event Oct. 16, 1995, and the couple is involved with the local organizing committee gearing up to send buses to the event. As members of the Nation of Islam, the couple is answering the call to convene that was made by Minister Louis Farrakhan, the leader of the movement. 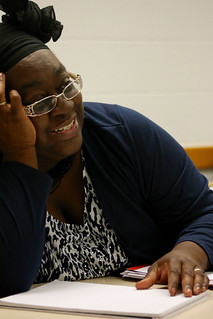 Brenda Muhammad converses with her classmates at the end of her documentary production class. Because the Documentary Film & History program is so small, the cohort has become something like a family, according to co-director and Prof. Richard Breyer. | Photo by Ashley McBride

In the Documentary Film & History program, Muhammad is part of a small, five-student cohort. Her classmates say that as an older student, she brings a mindset that others don’t possess.

“She adds an element of wisdom but she’s unassuming, she doesn’t talk down to anybody,” said Irene Domenico, a student in the program. Domenico added that as a 29-year-old, she and Muhammad bond over being the older students in class.

Professor Richard Breyer, the co-director of the program, has witnessed how Muhammad has progressed in her technical ability and in her understanding of the filmmaking business.

“She appreciates all of the skills it takes to produce a documentary or just to tell an effective story,” Breyer said. “She brought the maturity to collaborate with others, but I think she now has a better sense of how you collaborate in this environment.”

Once her film is complete, Muhammad said she hopes it can be used as a teaching tool in activist organizations and in workshops about social justice. She is looking for individuals who attended the original Million Man March and who are willing to share their stories for the film. She is also seeking volunteers attending this year’s gathering who can help film and produce footage. Muhammad is optimistic that with help, she can cover more ground.

“There’s going to be such a mass of people there that it’s better to have many different points of view captured through the lens of others, so that’s a relief to know that I don’t have to catch all that footage myself,” she said.

When her husband reminisces about his time at the Million Man March in 1995, what he recalls most vividly is the atmosphere of unity among the million men who showed up. He remembers seeing hundreds of thousands of black men convening on the National Mall to contradict the stereotypical view of black men as well as to bring attention to injustices affecting the black community.

“It was a sense of peace and a sense of calm and a sense of brotherhood that I’ve never experienced before in my life,” he said. “I remember saying to myself, ‘if I die today, it would be all right.’”

Farrakhan called for the initial march in 1995 to address inequality plaguing the black community and to compel politicians to address race issues. The Nation of Islam, the NAACP, which is the nation’s oldest civil rights organization, and the National African American Leadership Summit collaborated to plan the event.

Named Justice or Else, this year’s event will demand justice and accountability for racism and police brutality afflicting the black community today. According to the Justice or Else website, organizers are fighting for justice for all groups of people, including women, the poor and veterans.

Muhammad emphasized the necessity of the annual gathering. “We want people to think about the need for justice here in America,” she said. “There are so many people being mistreated and killed, so it’s time for us to go together in unity, to the government and let them know we need justice.”

As co-chair of the local organizing committee for Justice or Else, Muhammad is working on multiple fronts: to get the word out about the October gathering and also about her project. She said she plans to visit barbershops, churches and community groups to locate people who could share their experiences.

However, she also points out that it is the collective responsibility of black people to record their history and perspectives for future generations. She ultimately took on this project to contribute to that.

“Learning how to make this film or how to capture our stories can help make us whole and can help fill in some of our gaps,” she said.