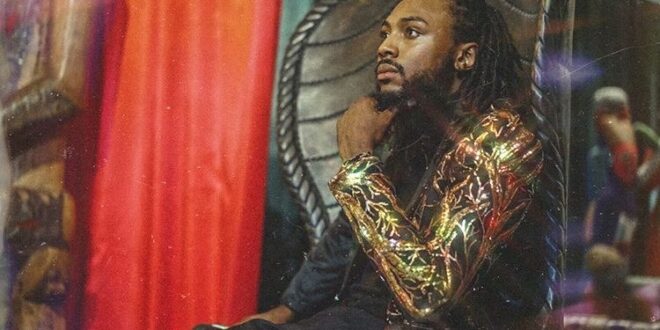 Jaquiel Bullock, formerly a youth advocate at Westside Academy at Blodgett Middle School, was driving a 12-passenger van full of middle schoolers. He searched for his aux cord to connect his phone to the vehicle’s speakers but couldn’t find it. He settled on the radio, and heard an advertisement for a singing competition at Singer’s Karaoke Club. Bullock, who was studying for the LSAT and feeling the stress of preparing for law school, decided to go and enter to relieve the pressure of studying.

At the competition, he sang John Legend’s “All of Me” and felt something he hadn’t felt in years. Something he’d been ignoring.

“There is a feeling when you are in your zone, and you’re doing something you were meant to do,” said Bullock, reflecting on that moment.

Afterwards, he wrote his first song, “I Can Fly,” and next produced his first album, “The Natural Project,” which won him his first SAMMY (Syracuse Area Music Awards) Award in the R&B category in 2019. It was monumental because he finally felt Syracuse, a city that shaped him and his music, recognized his talent.

His latest album, “Summer Nights in the Southward,” released last August,  won him a second SAMMY in best R&B album this year. This album encapsulates his personal journey and emotions from what triggers him, excites him and makes him cry. He says it serves as a blueprint for anyone who listens to feel confident to make it out of the same circumstances he did in Syracuse.

“I want you to feel empowered,” he said. “I wanted it to be the journey of a Black man coming from that kind of environment, and to show you exactly where you can be by the end of the album.”

His musical journey started when his grandfather, Raymond Bullock, and his wife, Karen, picked up their grandson from nursery school. They turned on the radio and Whitney Huston’s “I Will Always Love You” came on. Next, they heard Jaquiel singing in the backseat.

“This little dude in the backseat singing,” said Raymond to his wife, “‘Look, this man, he can sing.’”

When they returned home, Raymond would often sing with Jaquiel when the show “Barney and Friends” came on. Together they’d sing the signature song lines — “I love you, you love me” — to each other. The house was also filled with R&B and soul classics from Motown like The Temptations, Smokey Robinson and the Miracles and Marvin Gaye, which shaped Jaquiel’s childhood. Raymond, who earlier in his life was a singer and performed in bands, wanted to help further develop the singing ability of his grandson. So, when Jaquiel was about 6, his grandfather would take him to the basement that was covered with carpet, and Jaquiel would lay down on his stomach and told to hold a note. This, in Raymond’s mind, would help Jaquiel learn how to sing and sustain different notes.

As Jaquiel got older, music became less serious to him. He grew up on Fage and Midland avenues and graduated from Nottingham High School. His friends and family did not talk about going to college, so it was not his goal until he got a Say Yes to Education scholarship to Monroe Community College. He later transferred to a few other schools such as SUNY College at Old Westbury.

While in college, he caught people’s attention with his speeches and singing. His friend and fellow fraternity brother, Jonathan Cameron, remembers Jaquiel speaking about the mistreatment of Black women and how Black men need to handle themselves. Then he’d break out singing when he was finished.

“He put so much fierce aggression in his spoken word, and he started singing very angelically,” Cameron said jokingly. “I was like, ‘Oh snap!’”

After graduating from Old Westbury, Jaquiel was hired to work as a youth advocate at Westside Academy at Blodgett Middle School. A school, he says, in an impoverish area. He worked to find ways to motivate his students. While there, he met Elijah Haskins, who was a school support specialist. When Haskins realized Jaquiel’s gift, he wanted to help him on his musical journey and bring inspiration into lives of others in hard situations.

“Life is just hard and being a Black man and trying to navigate this life and living in America, every day is hard,” Haskins said. “When Jaquiel does music, he’s speaking to your soul … to your spirit.”

Jaquiel slowly started getting back into music as he began to travel, doing smaller shows and moving from Syracuse to Florida to find more opportunities. He hopes in the future to return to Syracuse, maybe even to help build a school for Black children to thrive, like his students at Blodgett who were faced with circumstances that made it hard to succeed.

“It’s only right that you come back and you show people,” he said. “Look, I made this path. You can take this one. And it could get you to where you need to be.”

Kamal Morgan is a journalism student at the Newhouse School