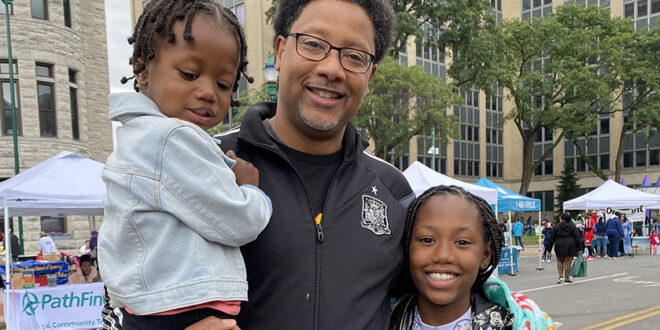 Quintal Stitt has had memories of Juneteenth celebrations in the city of Syracuse since childhood. Now, years later, Stitt continues to build those memories with his family so they too can celebrate and come to reminisce on the now federal holiday known as Juneteenth National Independence Day.

“Although there are Black people who have known about [Junetheenth] and celebrated it, like myself, as kids, there were a lot of people who didn’t,” said Stitt, the Children’s and Family Pastor at Syracuse Vineyard Church. “So, being able to create memories for [my daughters] is super important.”

The second day of the 32nd annual Juneteenth Cultural Festival was kicked off with a parade from the Dunbar Center to City Hall led by Syracuse University’s head women’s basketball coach Felisha Legette-Jack and her fellow grand marshal, Common Councilor Rasheada Caldwell.

Other organizations in the procession included Elks 315 Drum Line, the Kirk Park Lady Colts, the winners of the Miss and Little Miss Juneteenth pageants, the Brighton Academy steppers and sororities such as Kappa Xi Zeta and Alpha Kappa Alpha.

Lael Pierce, program coordinator for Fraternity and Sorority Affairs at Syracuse University and president of Kappa Xi Zeta Syracuse Chapter, attended with her sorority sisters. She said it means a lot to her to celebrate and acknowledge Juneteenth as a national holiday.

“Juneteenth is finally on the map and more people are recognizing it, even those who may not know what Juneteenth is,” Pierce said. “They see the name, they see the celebration, they see the people coming together, they see the colors of the African flag, so it’s an opportunity for people to become educated and aware of what our culture is about.”

Last year, legislation was signed into law establishing June 19 as a U.S. federal holiday commemorating the end of slavery in the United States. This makes the returning festival organized by the Syracuse Juneteenth Committee the first offering in celebration of the holiday. The annual celebration was skipped the previous two years because of the pandemic.

The festival included food and drink vendors such as Caravel, Henry’s Hen House, Pascarella’s Catering & Bakery and barbecue from Who Want Smoke BBQ and Jonny B’s BBQ. An kid-friendly area included an arts and crafts section and games. Also local jewelry and clothing were for sale, and in the commons of City Hall, a vaccine popup was offered. Those who received their first, second or a booster shot received $25 gift cards.

Darlene Wagner, the owner of Lady D’s Afrocentric Experience, a brick and mortar on Kirkpatrick Street in Syracuse, says she has participated as a vendor for 20 years. She curates and sells jewelry, accessories and clothing representing the Black experience.

“[My store] is a representation of us and our ability to do whatever we set our minds to,” Wagner said. She continued saying the community needs to “stick together” and the Juneteenth celebration is the opportunity to do so.

The evening carried on with performances by Jon B, Lindsey Williams and the Divine Connection, Meditations and TrumpTight315. A fashion show debuted a new line of dresses by fashion designer Terry Bellamy of Styles by Bellamy.

Syracuse Juneteenth’s annual Ancestral Dinner returns June 24. The dinner will commence at 7 p.m in the Sheraton University Hotel and Conference Center. Tickets are $50 and can be purchased through Eventbrite or by calling (315) 870-9022. The night will include music performed by UAD Showgroup, The Brownskin Band and the Blacklites.