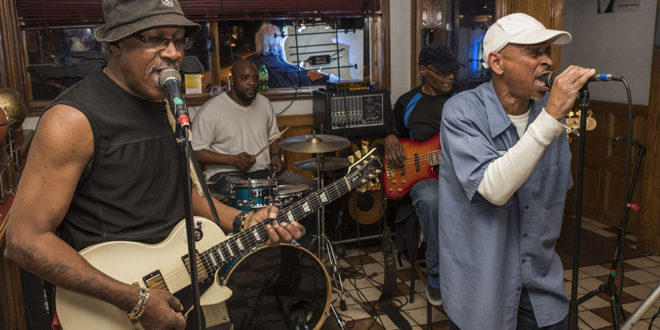 When the notebook Oriana Kyles writes her poems in disappeared from the B&B Cocktail Lounge, she considered giving up writing.

Samuel Adams, a friend and a regular at the former B&B Cocktail Lounge where Kyles worked, wasn’t hearing it. “‘F*** that,’” he told her. “’You got to keep going, keep pushing. It’s all still in your head.’”

Adams always supported her, Kyles said, more than anyone. He would coax her up on stage to read a poem, then give her props afterward.

“I confided to Sam. I cried in front of Sam,” Kyles said of Adams, whom she knew since childhood through her mother, and then bonded with on opposite sides of the counter at the B&B. “And he protected me. He let guys know someone was looking out for me. ‘That’s my baby girl; I know her momma,’ he’d tell them.”

Adams died unexpectedly in early January at the age of 62. Friendly, energetic and reliable, people knew Adams as a talented singer, supportive friend and long-time jack-of-all trades for the Southwest Community Center, where he worked for 42 years. His employer is a community staple, open for the past 43 years.

Adams was often the first person to unlock the center in the morning and lock it back up again at night, said Lawrence Williams, executive director of Syracuse Community Connections, which runs the center.

“Sam was instrumental here, a critical piece in making things happen,” Williams said. “He knew every inch of this 26,000-square-foot building, and he could fix anything — inside or out.”

Sharon Owens, Syracuse deputy mayor and a former director of the center, said Adams was beloved by many on the South Side.

“He had a wonderful voice, soulful, and loved old-school songs,” Owens said. “And he was the person to call. He knew how to fix problems and lived right down the street from the center. He was always there for the center, for people in general.”

“He loved that song, and all sorts of music, but especially groups like the Commodores and the Temptations,” he added.

Monnie is one of Adams’ four sons. He is also survived by his wife, a daughter, and 25 grandchildren, according to his obituary.

That Kyles and Adams become friends at the B&B was no accident — he lived in an apartment next to the lounge. He was there the night it opened in 1989, and the night it closed 28 years later in 2017.

Ben Cleeton, a freelance photographer who contributes to The Stand, became friends with Adams at the B&B. People at the lounge saw Adams as family, and the feeling was mutual, Cleeton saw.

“There was a mini-family there that Sam helped build and nourish,” Cleeton said. “People loved him. He had a great personality, and people looked forward to him signing. Sometimes he would take the microphone at an open mic, and others he just burst out in song at the bar.”

Kyles used the word family, too.

“Every Sunday I worked he brought me a plate of food as if I was his child,” she said. “He was a wonderful cook, and he liked that I would try almost anything. He even got me to try chicken feet.”