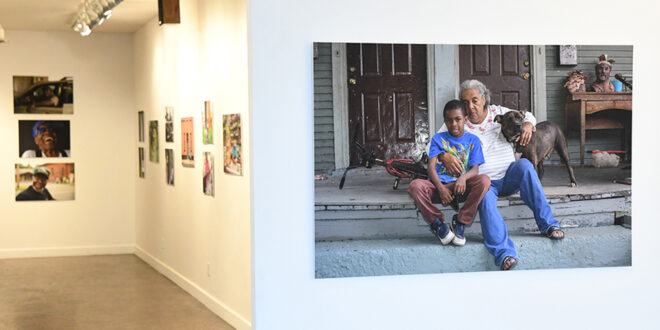 The Stand's Photo Walk exhibit is on display at ArtRage Gallery, located at 505 Hawley Ave., through May 14. Public hours for the gallery are: 2 to 6 p.m. Wednesday through Friday and noon to 4 p.m. Saturday. | Mike Greenlar

How do I best summarize The Stand’s annual Photo Walk for those not familiar?

Every aspect of this collaborative undertaking works to fulfill The Stand’s mission and has grown in popularity because not only is it engaging for all involved, it’s also fun.

“It’s become a signature event for The Stand,” said Steve Davis, who founded the community newspaper project. “It really became much more than I ever thought that it would be.”

He says the Photo Walk helped project organizers discover the many shades of character in the community and just how beautiful a neighborhood can be.

The annual event was initially modeled off an established event that brought together a community of photographers from across the world — Scott Kelby’s Worldwide Photo Walk. More than a decade ago, Kelby’s event was held each July and thus why I chose to organize a group in 2010 to snap photos throughout the South Side. Kelby’s walk has continued but moved from July to the Fall following many grumbles concerning that month’s sweltering heat. His event culminated in a gallery of images, all taken on the same day from nearly every crevice of the globe.

Our Photo Walks have done the same, at the micro level, by capturing the neighborhood on a typical Saturday for 12 straight years, although we continue to hold our walks each July.

I love most how the Photo Walk creates a moment for all to remember — the volunteers, participants and those we meet along the way — constructively and deeply.

“The Photo Walks provide a visual way to share the people, culture and environment of this community with the greater Syracuse area,” said participant Lisa Salisbury Hackley, who believes by participating people are pulled out of their comfort zones.

The first flurry of walks followed a set path with groups ranging from eight to two dozen or more. After a few years, interest rapidly grew.

A single walk morphed into multiple options, allowing participating photographers to document multiple sides of the neighborhood. Two routes added were a historic walk focused on the neighborhood’s architecture led by David Haas, creator of the popular Instagram @SyracuseHistory, and a trek under the I-81 viaduct to document this area before it is impacted by construction of the community grid.

There aren’t many pursuits I can think of that can draw such a diverse crowd around a united focus. Thus the Photo Walk is unique in the dynamic of those involved — both young and old, professionals to novices, city residents to outlying areas (even attendees from as far as Canada once), with one commonality shared: curiosity.

In 2020, we were forced to rethink our plans to avoid large gatherings. I still wanted to find a way to capture this moment and how life continued in the city despite the pandemic. I worked to find new partners and develop our first photo contest as a way to continue to collect images and document this historic moment.

We expanded the call citywide and incentivized photographers with prizes to share their images.

Top picks were revealed online during a Facebook live and displayed publicly by the Urban Video Project (UVP). This partnership offered a great way to showcase winners and safely bring the community together. This outdoor display projects videos and images on the façade of the Everson Museum of Art from dusk to dawn. Each summer, a community exhibit is featured and organizers felt The Stand’s project was an ideal fit because of the array of images, all taken by city residents.

Rolling into another pandemic summer, this time with lower transmission numbers, we offered a hybrid option in 2021: multiple, mini Photo Walks along with the photo contest. Five different walks, held three weekends in July, were planned on all sides of the city.

In the end, our Photo Walks have helped The Stand capture the faces and stories that define our community. They’ve allowed not only our contributors to engage with residents in a genuine way, but also helped to open the community to many who may otherwise bypass visits to some neighborhoods.

“I don’t know of any other event that asks individuals to go to an area, pause and really look around you,” Haas noted.

Thanks to the Finding Common Ground grant awarded in 2018, we were able to pull from the thousands of images taken that year and share the bounty with the wider Syracuse community. In addition to gallery shows, selected Photo Walk pictures found permanent homes and have hung in five South Side locations: Blue Brothers Barbershop, Beauchamp Branch Library, Cut Kings, Elks Lodge and Colonial Laundromat on South Salina Street.

The grant committee sought projects that worked to turn people toward the world and amplify unheard voices.

Our hope in securing spots for images throughout the community helps residents feel represented and seen. And when residents recognize someone in a photo, I hope a Duchenne smile lifts across their face. What scientists consider the most authentic expression of happiness is this smile, one that extends up to the eyes and crinkles the corners with crow’s feet.