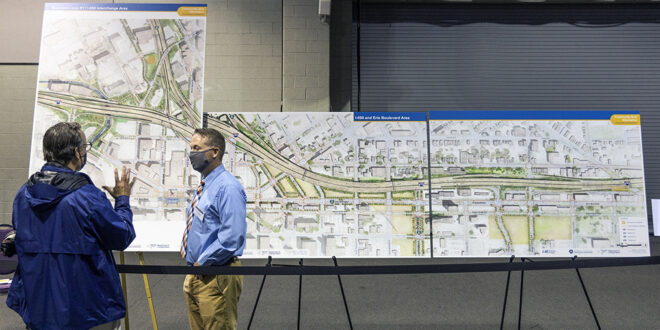 The New York State Department of Transportation held public hearings on the I-81 project at the Oncenter in downtown Syracuse Wednesday. | Dylan J. Suttles, The Stand Photographer

Close to two dozen residents of Syracuse and its suburbs spoke in favor of the Community Grid Alternative for the Interstate 81 Viaduct replacement project in Syracuse at a public hearing set up by the state Aug. 18. Residents said they support the $1.9 billion project, which is meant to replace part of the aging highway and connect neglected city neighborhoods, but concerns regarding economic justice for marginalized communities and area gentrification still linger.

The public hearings, along with an open house event that featured several state officials answering questions, were part of the last public comment phase of the I-81 replacement project set to end on Sept. 14. The replacement project has been more than 10 years in the making and the Community Grid strategy, the cheapest of all three alternatives, is the preferred choice by state Department of Transportation (NYSDOT) and prominent local elected leaders.

In the coming weeks, eight additional neighborhood meetings are set to discuss the project at locations throughout the city and surrounding suburbs. These smaller-scale meetings will take place in local schools and will also have DOT staff on hand to explain the project and respond to questions.

According to the extensive Draft Environmental Impact Statement (DEIS) released by NYSDOT last month, the Community Grid calls for the demolition of the I-81 viaduct that runs parallel to Almond Street, turning and expanding Almond into a boulevard that supports the redirected traffic (found on Page 9 of the DEIS executive summary). A portion of Interstate 481 would become the new I-81, with two lanes going in each direction (found also on Page 9). The existing I-81 route would become a new “Business Loop 81,” a limited access highway that passes through the community grid (Page 9 of the DEIS executive summary).

The Community Grid would also involve reconstruction of the portions of I-690 from Leavenworth Avenue to Beech Street and Hiawatha Boulevard West to Bear Street, new or modified interchanges on Interstate 690 and Business Loop 81, as well as the reconstruction and reconfiguration of local streets in downtown Syracuse (found on Page 9 of the DEIS executive summary).

Part of the Community Grid plan addresses racial and economic injustices that rose from the construction of the original viaduct, which defaced the city’s 15th Ward in the 1960s. In the DEIS, NYSDOT officials state they will form a “land use working group” consisting of representatives from the city, Syracuse City School District, economic development and economic opportunity organizations, the business community, environmental justice communities and neighborhood residents (found on Page 15 of the DEIS).

This group would provide input to NYSDOT in establishing a framework for the non transportation use of the remaining land or properties not used during construction (found on Page 16 of the DEIS).

Joss Willsbrough, a Syracuse resident representing Planned Parenthood’s local Health Center, said during the public hearing she would like to see the plan address those injustices in the way of a land trust controlled by the residents in the area east of Martin Luther King Boulevard. Land trusts typically serve as a way to give communities a say in what happens with a property or a piece of land.

“The land trust would protect the land from gentrification and would serve as reparations of the complete destruction of the 15th Ward as a result of the rise of the original viaduct,” Willsbrough said.

“If you leave it in the hands of economic development stakeholders, the area will be gentrified,” said Dancil, adding the city’s chamber of commerce and the City of Syracuse Industrial Development Agency (SIDA) and Onondaga County have perpetuated an “egregious” economic climate for marginalized groups in Syracuse. “They value developers over people. They have done this through tax break after tax break that goes to projects that do not benefit our residents.”

Some elected officials see a benefit in the implementation of the working group as described by the DEIS.

“I appreciate NYSDOT’s inclusion of a land use working group for surplus land that will become available as a result of the project,” Mayor Ben Walsh said in a statement. “Land use is a priority concern for the city and its residents, so there must be local control of decision making regarding surplus land.”

Another way for these injustices to be remediated, residents say, is to provide residents from underprivileged backgrounds and in affected areas with high paying construction jobs at the Community Grid site.

“What does economic justice look like?” UJTF Board Member Aggie Lane asked rhetorically. “(Like) many city residents taking home a paycheck, earned in their backyard, on the I-81 project.”

Lane said UJTF estimated that thousands of jobs that could pay more than $30 per hour to city residents are there for the taking. In their estimates, the UJTF calculated at least $7 million work hours, she said.

Lane added she would like to see a percentage of those work hours go to city residents, too.

Suggestions on what percentage that should be varied, according to multiple city residents, with some suggesting 20% and others arguing for 30%. At the end of the day, members of the UJTF and New York Civil Liberties Union (NYCLU) agreed that city residents are qualified to build infrastructure for the future of the city.

“These hiring initiatives must include those historically disadvantaged by incarceration, lack of childcare and homelessness,” said Maureen Curtin, a NYCLU board member. “More than this, though, I urge the NYSDOT to hire an independent compliance officer so local hiring goals are effectively monitored, communicated and met.”

That compliance officer should meticulously collect data on workforce hours and demographics and fully and regularly disclose that data to the public, Curtin added.

Although some may question whether the local workforce is qualified to take on the construction workload, Lane said, the goals for what these jobs will demand should be realistic.

“Naysayers will start questioning whether the city has the skilled workers to fulfill a city resident hiring goal. Of course it does,” she said, using the example of the city’s Joint School Construction Project that has rebuilt schools within the district in the last decade.

The Joint School Construction Project has taken advantage of a law passed in 2016 requiring contractors who do business with the city to use workers from Syracuse neighborhoods for 20% of all work.

“The Community Grid is a great opportunity to keep these skilled city tradespeople working,” Lane said.

“The city and NYSDOT have worked well together in planning to ensure city residents — especially women, people of color and veterans — get equitable opportunities for jobs and careers from the project,” he said. “The most critical stages are happening now, and I urge the state to set aggressive goals.”

A roundabout planned near STEAM at Dr. King Elementary School is also a cause for concern for residents due to its proximity to the school building. As detailed in the DEIS, traffic headed into Syracuse from the south would enter the street-level roundabout near the school (found on Page 9 of the DEIS).

Southwest Side resident Debra Smith, who has owned a home in the area for 28 years, said she was concerned not only because of potential traffic accidents, but also due to adverse health complications that could arise from construction of the roundabout. She mentioned the potential aggravation of diseases affecting the respiratory system, such as chronic obtrusive pulmonary disease. She also mentioned the high rate of city residents with asthma, which according to the Community Health Assessment and Improvement Plan released by the city in 2019, sits at 13% of the population.

“I am asking you to move the roundabout from a humanitarian point of view, not just from dollars and cents,” Smith said. “When I bought this house 28 years ago, I did so to help rebuild Syracuse, to keep the area revitalized and built up. You cannot put a roundabout in a neighborhood with so many children and families.”

Walsh also noted the proximity of the roundabout is one of his chief concerns regarding the Community Grid.

“We cannot put our children at risk for decades to come,” he said. “I request that you listen to the concerns on this critical element of the project and present alternative solutions in the final environmental impact statement.”

Construction on the project is set for next year after a couple of delays due to the COVID-19 pandemic.

Residents seeking to submit a comment may do so here before Sept. 15. Comments may also be emailed to i81opportunities@dot.ny.gov or submitted over the phone at 1-855-481-8255.

Comments may be mailed and addressed as follows: