Though the event drew only about 50 people, leaving most of the auditorium seats empty, five speakers and a drill exercise by Fowler High school’s Navy Junior Reserve Officers Corps infused the event with an energy that belied the thin attendance.

“We come in hope that we can make a better Syracuse, and I believe from the bottom of my heart that we can make a difference in this community,” said Douglas Dixie, a Mary Nelson Youth Center board member, in an opening address to committee members, a sprinkling of parents and Superintendent Dan Lowengard.

In December, Nelson herself asked Syracuse residents to create six committees, each devoted to a particular issue — education, health, career, services, violence and economics.  Each committee meets weekly; on the first Saturday of every month, all six groups convene and share information.  The disparate committees allow for a multifaceted approach, but the complex issues they address usually cross committee borders.

“What we’re realizing is that all of these things and the community are connected, economics has to deal with careers, and education and violence,” said Omar Sharif, a committee member.

On Saturday, Conrad Schneider, a representative from the 911 Call Center, spoke first, telling the audience,  “It’s OK to call 911.” Schneider said residents of Onondaga County should not hesitate to dial the number for emergencies and non-emergencies alike.  He said callers to 911 can always remain anonymous. 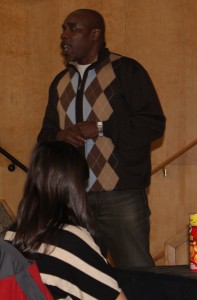 Walter Cotton III, a Syracuse resident and the managing member of a federal contracting firm, followed with a proposal to transform the way the community thinks and rebuild the Syracuse economy.  “We need to give everybody in this community a better, believable dream,” he said.

Cotton said the federal government has over $300 billion worth of contract opportunities that must go to veterans, small businesses, businesses owned by women and businesses in historically marginal business area.  Cotton said he believes that if Syracuse residents land these government contracts, they will create jobs and revitalize the economy.  He said he is talking with local colleges, community members and political figures to try to create a pilot program to help the process of acquiring the contracts.

During a break in the speeches, four young Navy Junior ROTC members from Fowler High School performed a drill demonstration.  The high school ROTC program, which teaches values of discipline, respect and service, is the first of its kind in Syracuse.  The four students said their experience had been life changing.

“Before, I had really bad anger issues. Master Sergeant straightened me out,” said Troy Hamlin, a member for two years.

Later, Chris DePerno, the founder of Integra Discovery Services, spoke. He founded Integra to teach parents how to detect the early signs of children’s drug use.  DePerno brought along a bong mask and a fake Pringles can, complete with a hidden drug compartment, producing gasps across the room.  DePerno said the solution to the drug problem starts with parents, especially if they catch early signs of drug use. “We have always been attacking the supply. The police bust their butts going after the supply, but the drugs are still here.  We need to address the demand,” he said.

John S. Pekoff, president of the local Teamsters union, spoke last, distributing his business card and encouraging any attendees looking for employment to use it.

Despite that, one newcomer, Leonna Roberts, a Syracuse mother of two, vowed to return next month.  “I’m a mother, and as a mother you have to put something in to get something out.”

Forty minutes after the school emptied, two participants stood by the door, coats in hands, discussing ideas, innovations and ways to make this thing really work.

“We all realize that we have to take the initiative, if we don’t implement these ideas, it’s all fluff,” Sharif said.  When asked who he would like to see at next month’s meeting his response was simple: “The Youth.”