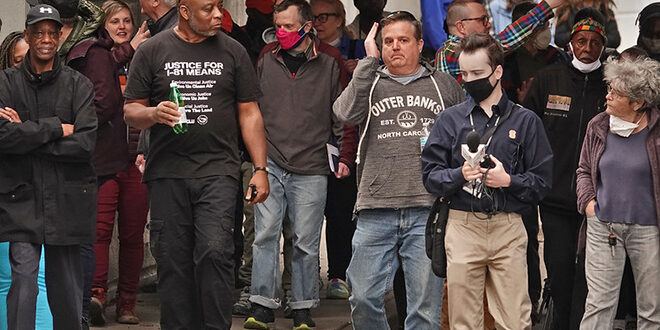 NYSDOT I-81 Project Director Mark Frechette, at center, motions ahead to where Business Loop 81 will be, at the present intersection of Van Buren Street and Renwick Avenue during a walking tour organized April 23, by the NYCLU. A second tour was offered April 30. | Mike Greenlar

New York Civil Liberties Union organizers and State Department of Transportation officials directed a community conversation over the weekend at STEAM at Dr. King Elementary School on the Interstate 81 project that will transform the aging viaduct in the next six years.

The $2.25 billion project will have two construction phases, NYSDOT officials have said in the past. Phase 1 will start later this year, while Phase 2 is scheduled to begin in 2026. The first phase includes changes to roads and infrastructure near STEAM at Dr. King Elementary School in the South Side. During this phase, construction crews will begin tearing down parts of the elevated portion of I-81 in the city.

“We need to know in which way you plan to remediate the health issues we are going to have from the reshaping of this viaduct,” said Hudson, alluding to a comment made by Fudge about the already high rate of city residents with pulmonary health issues. According to the city’s 2019 Community Health Assessment and Improvement Plan, 13% of Syracuse residents deal with asthma or similar respiratory health issues.

“Is there going to be anything set up to help folks as we proceed with this and we inevitably see our rates are higher due to construction and demolition?” Hudson asked Smith.

Smith acknowledged Hudson’s concerns, but replied saying NYSDOT will not be the agency dealing with the public health effects of the project.

“We cannot do that at the DOT,” Smith said. “Under highway law, that is not part of the law.”

In response, Fudge said, “NYSDOT will be responsible for the effects of the project.”

“None of us desire for those (pulmonary health) rates to be higher,” Smith said. “But that is not something we can take care of. It may be that there are other agencies who can do that.”

A city resident, who declined to be identified, followed up on Smith’s comments, noting the effects of pollution ushered in by the I-81 project will target areas such as Pioneer Homes, one of the very first public housing developments in the country. The housing project bore the brunt of displacement and economic inequities that arose from the initial construction of I-81.

“I have a respiratory problem,” the resident said. “My doctor already said ‘I don’t care how small your exposure to dust is, you cannot be there.’”

A roundabout initially planned near the elementary school was a cause for concern for residents due to its proximity to the school building. The roundabout was recently moved closer to an intersection between Renwick Avenue and Van Buren Street.

Colleen Gibbons, a West Side resident, said NYSDOT needs to continue to monitor the concerns of South Side residents in relation to the roundabout.

“That needs to be first and foremost to NYSDOT. These are people who live in this neighborhood and are directly affected by the roundabout,” she said. “A couple of extra minutes in the car are not going to make a difference for motorists.”

Gibbons said she is impressed with the community engagement the project has generated thus far.

“(The) New York Civil Liberties Union (NYCLU) does a really good job at staying connected with the people who live in the areas that would be most affected by this project,” Gibbons said. “That is the key right now, continuing that across the city as the project unfolds.”

Part of the concerns South Side residents have had was the seeming uncertainty regarding the “Business Loop 81,” which is part of the project’s second phase. Phase 2 will transform I-690 and turn the existing Almond Street into Business Loop 81, a limited-access highway that would connect South Side neighborhoods, downtown and other business districts. The highway has raised noise pollution concerns among residents.

During the April 30 walk-through with community residents and NYSDOT officials, NYCLU Senior Organizer David Rufus said residents of nearby McBride Street will be most impacted.

“Folks have talked about the need for slowing down traffic in this area in order to reduce the volume. They are concerned when they try to sleep at night,” Rufus said. “These are the feelings of the community. There is so much information and so many dynamics that it is hard to figure out what is actually going on.”

Smith said during the walk-through that the inclusion of a noise barrier between the Business Loop and the area around STEAM at Dr. King can help alleviate some concerns, as well as free up as much property as possible for non-transportation use.

Ultimately, Rufus said the state still has a long way to go to continue listening to residents’ concerns.

“NYSDOT is going to slow the traffic down. They are going to make sure anybody who is going to be displaced gets an opportunity to stay in the community, and they need to protect the health of people when it comes to pollution,” Rufus said.

On pollution, Rufus said NYCLU will continue to ask questions regarding what agency will ultimately be responsible for protecting city residents.

“NYSDOT continues to say that is not their job,” he said. “We are going to continue to ask until we get an answer.”