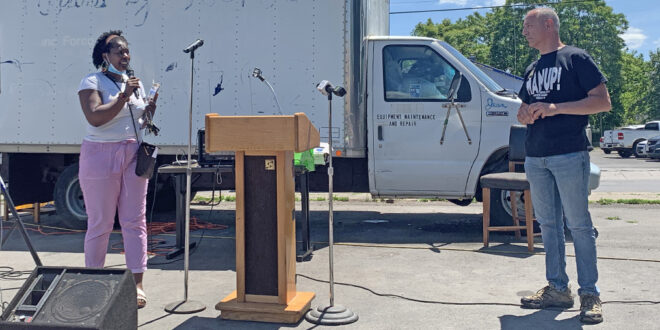 Resident Patrona Jones-Rowser said she found the lots suggested in Richard DeVito’s proposal to be too small to house 71 apartment units. She noted her opposition to the current project proposal but said she would be open to hear another plan that includes less units and that was re-designed to fit the South Side’s aesthetic.

A recently proposed low-income housing development in the South Side drew residents to an empty parking lot for an outdoor community forum to share their perspectives.

Local developer Richard DeVito, a founding partner at Paramount Realty LLC, is aiming to build approximately 100 low-income housing units in the South Side on land held by the Greater Syracuse Land Bank, citing “degrading housing stock” and a shortage of affordable housing in Syracuse. The Land Bank has sought proposals to redevelop this location since at least 2015, according to proposal documents on its website.

The income thresholds are based on a percentage of area median income, which in Onondaga County was calculated at approximately $61,000, according to a 2019 estimation made by the U.S. Census Bureau. Rent at this development would be determined by the percentage of area median income earned by a tenant, as well as their choice of a one or two-bedroom apartment unit, according to DeVito’s plan.

Rates would start at $650 per month for a one-bedroom apartment ($650 including utilities) for potential residents making 50 percent of the area median income and scale up to $850 a month for a two-bedroom apartment for tenants earning 60 percent of the area median income. DeVito noted the criteria delineated in the plan appeals to tax credit programs at the federal and state levels that would allow what would be a “$20 million project to turn into a $10 million project.”

“We don’t have enough housing for people in this community,” DeVito said at a public forum held June 12, where DeVito and community advocate Tyrone Hines sought to receive feedback on the project from neighboring residents. “There are thousands of people who are not being served by quality housing in this community. The purpose of this development is to provide this type of housing.”

Hines, who hosted the public forum at the parking lot on the corner of South Salina Street and Dr. Martin Luther King West, called the information session “the first step” in trying to get community input to project stakeholders.

“We are trying to let the people in the community decide what the community needs,” said Hines, alluding to his budding friendship with DeVito and their discussions regarding community development.

Citing the need to preserve what is considered a historic area that represents the South Side’s legacy, some community members made their message clear: They want DeVito to come back with a project that fits the needs of the targeted area, or they suggest the developer seek a space that fits the initiative as currently proposed.

Area resident Patrona Jones-Rowser underscored the need for the proposed project to uphold the look and feel of the other buildings and homes in the area, adding the area is primarily populated by two-story historic homes.

Another concern cited by residents was the “concentration of poverty” that would occur within the building.

“To me and people in the community he is further concentrating poverty and that just breeds a certain type of activity that we don’t want in that area,” said Jones-Rowser, noting her concern for the high concentration of tenants in a 1.36-acre space.

Teresa Giles, a South Side resident, echoed Jones-Rowser’s comments, noting the high number of units in a small space would help replicate issues of urban decay in the community.

“That many units and that small space breeds drug dealing. It breeds violence,” said Giles, adding she lives near smaller apartment buildings facing the issues she highlighted. “It breeds teenage pregnancy. It breeds high school dropouts. We know that.”

In response, DeVito said social issues within the building would partly fall on management.

“What I try to make clear is that the real estate is the hardware,” he said. “What happens on the inside is the software. It is the management and the ownership who have to make sure those kinds of things don’t happen.”

For some other residents, the work DeVito is proposing is a sign of help for a community that has not seen transformative revitalization efforts in years.

“No one has done anything for this community in I don’t know how long,” Melinda Wilson said. “Instead of smashing (this plan) and knocking him down for what he is trying to do, let’s get together and work with this man and build up the community because I don’t see anybody else, anywhere else trying to do this.”

Charlene Tarver, the executive director and founder of the central New York chapter of the Women’s Economic Institute, said the idea of affordable housing is a good start for the improvement of the South Side, but added residents would like to see more community resources attached to a development plan for the area.

Preserving the lot as part of the South Side’s business district, Tarver said, is also a priority for community members.

“When you come out to hear what the people’s concerns are, part of the concerns are the lack of programs, services and resources,” Tarver said. “So while we applaud you putting in more housing, that is not enough in this community.”

Tarver also said she would like to see better community outreach from DeVito and other proposals for developments or redevelopments in the area.

“There are feasibility studies you can do. You can go door to door to the taxpayers who live in the community. You can do surveys, because your goal is community buy-in. Because if they buy into it, they’ll support it,” Tarver said. “When you open up dialogue, then you as a developer have to make a decision on whether you want to modify your plans at all based on the feedback or look for another space that fits the project.”

DeVito has approximately 30 years of experience in the world of real estate, overseeing the development of the Loews Building and the redevelopment of Dey’s Plaza. Both of these mixed-use developments in downtown Syracuse are host to fleets of luxury apartments, as well as upscale office spaces and retail locations.

These two proposed developments would be DeVito’s first project aimed at low-income tenants. This is a point of concern for some residents.

“He doesn’t have the experience, and he is just looking at some money that can be had from the government to work on this type of project,” said Jones-Rowser, who attended the meeting and has corresponded with media regarding the project. “That is what he is interested in, not what is best for the community.”

Ultimately, DeVito said the plan could very well be implemented at a different lot, but he is willing  to listen to community input and accommodate for residents’ concerns.

“There is a lack of housing in this community and nobody has been willing to put any housing up. What is happening is the Land Bank is getting all of this property, tearing down housing and not replacing it,” he said. “We are degrading the real estate in the community, so we have to deal with the facts.”

He continued: “The facts are that we don’t have enough housing and that the stock of housing we have in the community is degraded.”

A digital rendering of the project can be found here, as well as a snapshot of the floor plan.