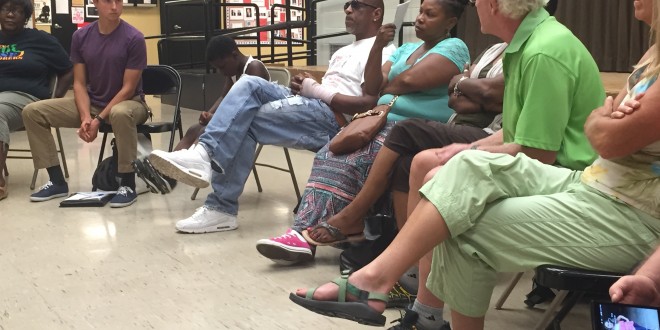 Residents Speak Out Against Tiny Homes

A second meeting took place Wednesday evening to hear residents’ concerns about the possibility of A Tiny Home for Good building tiny homes on Syracuse’s South Side.

Monica Williams, an Onondaga County Legislator with the 16th District, opened the meeting to 35 attendees at the Southwest Community Center. With a mix of volunteers, residents and interested social service providers, the attendees included about 10 neighbors to the proposed site. At just a few hundred square feet, the proposed pair of two-unit homes will house four individuals at 427 and 425 West Kennedy.

Many residents in attendance spoke out against building the homes. Concerns included the lack of initial information the nonprofit provided to residents, fears that tiny homes will bring in drug addicts and cause damage to current property values.

Andrew Lunetta, executive director of A Tiny Home for Good, first gave an overview of the project and then heard from residents to address their concerns directly.

Homes will be one room, with a cooking area and full bathroom. They’ll cost about $22,000 each to build. He says income-based rent collected from tenants will help make the project sustainable. Bob Dougherty, Common Councilor for District 3 and board member of A Tiny Home for Good, added that tenants would have a month-to-month lease and anyone that was not in compliance would be asked to leave.

Odell Rice, who lives on Crescent Avenue, questioned Lunetta on why he chose the South Side.

“We did not target any particular neighborhood,” Lunetta explained, “but we searched for properties that fit our requirements including zoning and utilities offered.”

The Kennedy lot is zoned for multi-family homes, Lunetta said, which allows for the attached tiny homes. He added zoning is concerned with the number of occupants and not size of the home.

Eilleen Grahm, who says she was the first African-American to purchase a home in her neighborhood in 1965, voiced concern about allowing homeless to move in, which she said could include alcoholics or drug addicts.

“We don’t know anything about who will be coming in,” she said.

But Lunetta said his group will know exactly who will be living there. The goal of his organization is to end homelessness and his mission is to help homeless veterans. One attendee, Ted Bauer, is set to be one of the four residents if the property is approved for sale by the county.

Bauer, 59 and a veteran, said he is looking forward to the move and to have a quiet place to call his own. He has been homeless in the past and recently lived on Merriman Avenue in the West Side, where he felt unsafe.

He began to feel angry during the meeting, hearing comments directed at homeless individuals – saying he felt personally attacked. “I don’t drink or do drugs,” he said, noting who they were describing was not him.

Sharon Owens, director of the Southwest Community Center, stated that she wanted to redirect the focus because she felt concern was not with individuals but the project itself.

“Our upset is with the design, the location and process,” she stressed. “It is not about the individuals.”

Lunetta noted that he went about presenting the project backwards, noting he should have first engaged the residents face to face.

“We need bigger and better things in our neighborhood, not tiny homes to make my community look odd and bring down its value,” Rice said before walking out of the meeting.

One suggestion was for residents to visit the first set of tiny homes, slated to be built by the end of this year at 4351 S. Salina St. to get a better visual understanding of the project.

The nonprofit will build Syracuse’s first two tiny homes with the help of local housing charity Operation Northern Comfort on a lot currently occupied by a billboard at the corner of South Salina Street and East Glen Avenue. This was private land donated to the group.

Board member Beth Scanlon put out an invitation to all residents to view the tiny homes once they are built.

“I would hate to have something like this hoisted on me,” she said in understanding everyone’s concerns. “Because we have not built homes yet and do not have a track record, I think you could come and see them, and then we can go from there.”

The decision to sell the property is scheduled to be made at 1 p.m. Tuesday, Sept. 1, at the Onondaga County Legislature Building. Williams said residents are encouraged to attend to voice their concerns or support.

Lunetta said if they do receive the property, his next step will be to further engage the community. If the project continues, construction would not begin until Spring of next year.

“We’re here to help renovate communities and people’s lives,” said Stewart Lawrence, a volunteer with the Tiny Homes partner group Northern Comfort. “Building the structure is the easy part; the real effort comes in working with and nurturing the community.”

— Article and photo by Ashley Kang, The Stand director