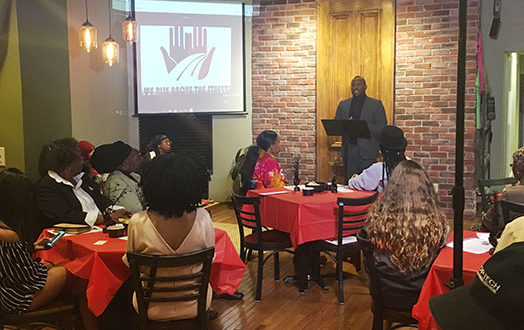 Members of the audience look on as Howard Jones speaks at the We Rise Above the Streets fundraiser dinner. The organization aims to end the stigma around homelessness.

ASyracuse nonprofit, We Rise Above the Streets, held a charity fundraiser recently to spread local awareness of the good works its members are planning. The primary goal of the organization, founded three years ago, is to fight homelessness in the community. That means handing out hundreds of free meals each Saturday. Al-amin Muhammad, the group’s founder, said he dreams of more.

While addressing attendees of the dinner meeting, held Saturday, Oct. 28 at Salt City Coffee at 509 W. Onondaga St., Muhammad spoke of expanding the organization. He said he envisions a restaurant with a menu that serves free food, a separate place where people could get a shower and a haircut and a place to attend Alcoholics Anonymous meetings. Muhammad wants to create safe spaces for Syracuse’s homeless community.

“I am tired of hearing the word ‘problem.’ Let’s talk about homelessness,” Muhammad said. “This is about to happen, I am not just talking. This is going to happen.”

Muhammad’s passion for serving the homeless community stemmed from his own experiences living on the streets after spending years in jail for drug dealing and gang violence. During the meeting, he spoke of these years and described his pivotal moment finding religion and wanting to start over.

The event also featured three other speakers affected by homelessness. One man, Joshua Williams, a middle school English teacher in the Skaneateles Central School District, warned people beforehand that he might get emotional during his story.

In 1984, when Williams was 7 years old, his dad left him to move to San Francisco, where he would soon fall victim to drug addiction and living on the streets. When Williams was 18, he decided to go to his father, as he wanted him in his life.

Williams ended up staying with his father on the streets. He said this is when he saw what it meant to be homeless. His father would use him to ask people for money, saying he needed to buy food for his son; in reality, the cash went for drugs. Williams, however, only has love for his father and others like him.

“My mom and I loved my dad despite everything. We can’t blame the homeless so easily,” Williams said. “They are human beings like all of us. My message is we need to humanize, empathize and socialize. This is what Amin is helping to do.”

Williams’ father has since died, but he was able to get off the streets, acquire two jobs and curb his addiction — something Williams attributes to love, God and people who cared. This is the reason he supports We Rise Above the Streets and is hoping to help Muhammad execute his vision.

George Lynch, a motivational speaker and author, echoed Williams as he described his personal experience growing up on the streets of New York City.

“I would call myself the kid with one thousand homes and I didn’t have one once,” he said. “Every time I see someone helping the homeless, I think ‘these kids could be the next me.’”

Heidi Baldwin, a local health coach, and Howard Jones, a life coach at Good Life Foundation in Syracuse, also spoke at the event. While all the stories differed, a universal message rang through: Homelessness is something that should be helped, not scoffed at.

The event attracted people who had heard and donated to We Rise Above the Streets before, as well as those who knew nothing about it and wanted more information.

Sarah Evans said she lives two blocks up the street from Salt City Coffee, and saw the event on Facebook. Evans is a retired postal service worker and said she tries to stay involved with the city because she “loves it and believes in it.” She said she planned to make a donation to Muhammad after the event. 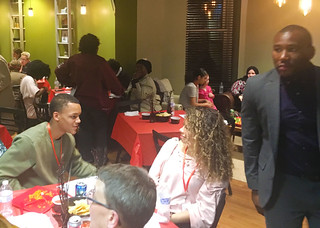 Just like those who attended the event, the people who volunteer for We Rise Above the Streets are diverse. Muhammad stressed this point when he spoke of all the people who come out each Saturday to help make the sandwiches that are distributed.

“What is amazing is that people from all walks of life come to this one room to make sandwiches on Sandwich Saturday,” Muhammad said. “I went crazy when I first saw 75 people in that small room one day. How beautiful is that? The community of Syracuse.”

Eyeruse Wonders is one of these volunteers. At only 16, she has been going to We Rise Above the Streets events with her mother for about a year now. Whether it is blowing up balloons for fundraisers like this or actually delivering the sandwiches, Wonders said being involved with We Rise Above the Streets helps her to feel like she is having a positive effect on someone’s life.

While the advancements Muhammad dreams of will take more funding and awareness than this event alone, he said We Rise Above the Streets is making huge bounds when it comes to shedding a light on homelessness and the invisible complications of it.

“I want to tell everyone that I love you and thank you so much for coming out to hear these stories,” Muhammad said at the end of his address. “If you see someone looking hungry, you don’t even need to give them money or food, sometimes it’s just a smile. Thank you for believing in me.”

— Article and photos by Alex Archambault, The Stand Staff reporter