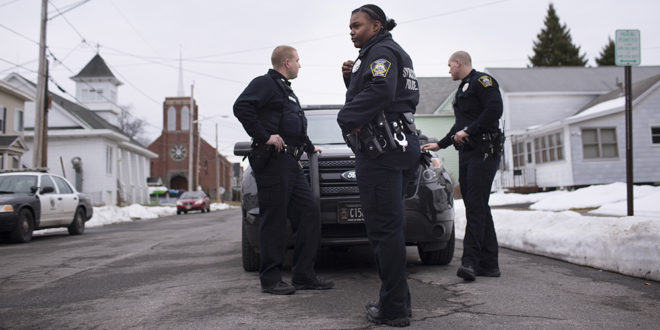 Syracuse Police Officers Adam Pritchett, left, Lashonda Russell, and Tim Martins chat after responding to a call. Russell says it is important for her to make a connection with the community and build trust. "We're considered a family," she said. "Police officers bleed blue but if you cut us we're going to bleed the same color as you. Even though people have these terrible views of the police we're still human like you." | Kathleen Flynn, They Wear Blue Photographer

Lashonda Russell’s mom supported her when she became a police officer. It was the reason her mom pushed Lashonda to go away to school — to find her passion, whatever it was.

“I’m one of those firm believers, if you stay where you are, you’re never going to grow. So I wanted her to go out in the world,” said Lichele Hanson, Lashonda’s mom.

While attending Morrisville State College, Lashonda completed an internship with the Syracuse Police Department. It led her to where she is today: a rookie cop with the SPD. 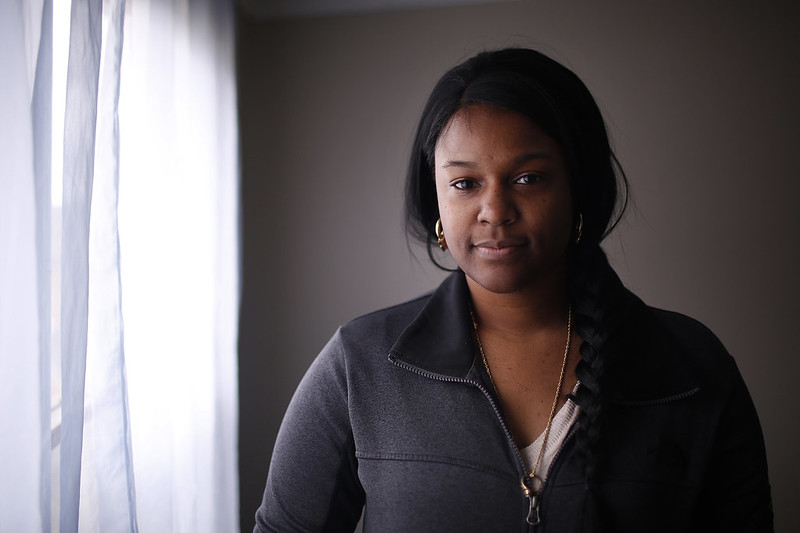 Lashonda Russell, originally of Long Island, was sworn in as a Syracuse police officer in March of 2016. She was one of 25 chosen from more than 450 eligible candidates. She completed her mandatory filed training in November and then began routine patrol on her own. | Kathleen Flynn, They Wear Blue Photographer

Lashonda’s dad, Ricardo Hanson, has supported her, too. He told her how proud he was of her and how happy he was to see her go out and follow her dreams.

And he is indeed proud. But it wasn’t until this April — when Lashonda’s parents agreed to talk about their daughter’s career choice in an interview at their home on Long Island — that she realized the reservations her father had. He said the job comes with too many risks. “(There’s) too much stuff going on right now,” he said, referring to the tense relations between police and the public in many communities. He said he’s afraid the job will change her.

Ricardo, who said he’s lived a hard life of running around with the wrong people, has seen police target people of color, including him.

Ricardo shares the views of many who feel police unfairly target people of color. Minorities who decide to pursue a career in law enforcement are often seen as “Uncle Toms,” or as having gone to the “other side,” making it difficult for police departments to recruit officers from minority backgrounds. As a black and female officer in the Syracuse Police Department, Lashonda is quite an exception. In 2016, just 7.1 percent of sworn personnel were black; only 14 percent were female.

Ricardo said the good police officers he’s seen know the community, and he urges more to do the same. When Lashonda’s younger brother, Jewuel, was getting into trouble, officers who knew the family would stop by to keep them in the loop and to suggest getting him some help.

By her father’s standards, Lashonda’s already on the right track. In her short tenure as a police officer, she has worked at making connections in the Syracuse community — not just arrests.

One of those connections is an elderly woman, “Patricia,” whom Lashonda checks up on every now and then. Lashonda met her when Patricia called the police, concerned about finding a bullet in her attic where her grandchildren play. Lashonda discovered Patricia has lived in her house for five generations and has witnessed the deterioration of the neighborhood. Now, Lashonda visits Patricia when she can to make sure she’s doing OK there and is safe.

A call on the West Side this spring about a stolen vehicle turned up more evidence of Lashonda’s connection-making. A man named “Sean” spotted her and eagerly approached, proudly revealing a stash of coins in his hand that he’d collected. Sean, Lashonda explained, has a mental disorder. She first met him when Sean called police because he felt threatened by another mentally disabled man in his complex whose tongue permanently sticks out. 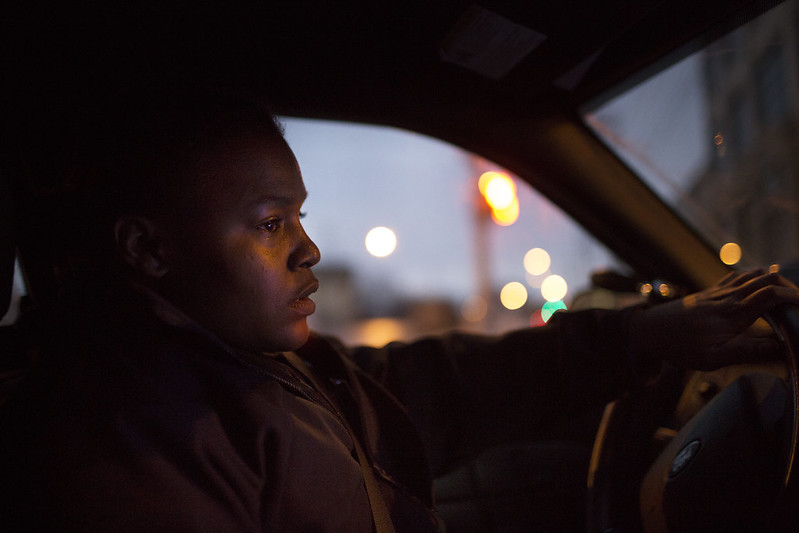 “It doesn’t matter what I’m doing. If he sees me, he’s there,” Lashonda said.

As she slowly drove through the West Side, her assigned quadrant that afternoon, Lashonda shared facts about the beat, pointing to a window that had been pierced by a bullet and the area where a fellow officer had shot and killed a man during a party that spiraled out of control.

She came across a girl she had arrested during an incident at a 7-Eleven the week before. Lashonda rolled down her window, greeted her and asked whether her charges had been dropped. The girl responded “yes.” Lashonda, who thought she may have been lying, enthusiastically replied, “Good,” anyway and kept driving.

On yet another call, Lashonda advised a son and father who had just gotten into a bad fight. After much coaxing, she persuaded the father to take his son to the Comprehensive Psychiatric Emergency Program (CPEP), a licensed psychiatric emergency room.

She told him, “This is your son. The way that you raise him is the way that he’s going to grow up, so if you want him to be successful, you’ve got to be there to support him.”

Her reward: While at the hospital on a call the next day, Lashonda saw them getting along and smiling.

Still, even the supportive Lichele acknowledged Lashonda will meet other people on the beat who might not be on board with her being on the force.

“I know she’s going to run across people, especially of the same race, saying that she’s a sellout,” Lichele said. It’s something Lashonda confirms has already happened.

Lashonda said she would hear barbs while she jogged on the streets during the police academy training that new recruits must go through after they’re hired.

She’s also met it on the job. On one call Lashonda responded to with several officers, a young black woman who was acting erratically told Lashonda that she was a “black b—-” and that had she not been hiding behind her badge, she would get beat up.

Usually, Lashonda doesn’t let comments like that get under her skin, but that particular incident did.

“I can honestly say she kind of got me upset a little bit. Like I didn’t do anything at all. I don’t understand why you’re attacking me,” Lashonda said.

While her dad sees how race plays a role in police-community relations, Lashonda said she doesn’t see color herself when it comes to her job.

“Race is not something that I really play into. It’s not that I don’t care about it at all, but it’s just that I feel like everyone’s human and we do certain things because that’s what your brain is telling you to do,” she said. “It has nothing to do with the color of your skin or where you come from.” 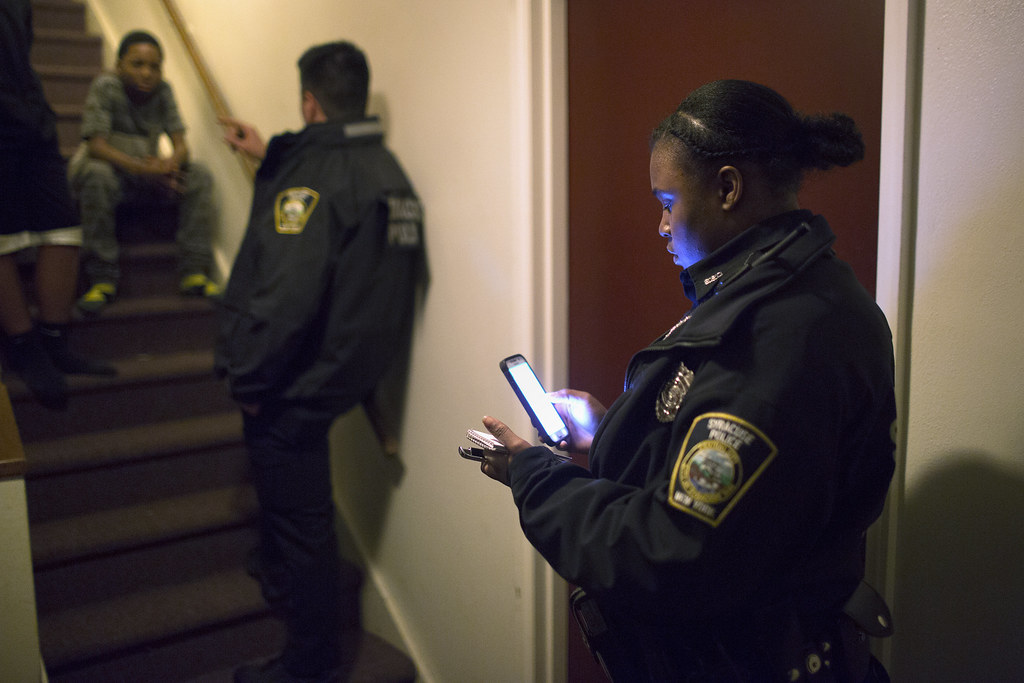 Lashonda Russell makes a phone call while her partner speaks to children who a victim of a robbery thought might be the suspects. Russell was calling their alibi. As it turns out, the children were not involved. Russell said she hadn’t yet been called to a situation like this. She said she was immediately skeptical that the children were guilty because they appeared younger than the man’s original description. | Kathleen Flynn, They Wear Blue Photographer

The SPD has been trying to recruit more officers of color — with only modest success. The latest class of police recruits was more diverse, but Lashonda’s father still voices doubts. He believes police departments hire people of color just to cover themselves.

“Sometimes they just put you in there, just to put you in there to say they got a black officer in the group. Not even if you’re a good officer or not, just because you’re black, so they don’t get no grief about anything,” Ricardo said.

Now that she’s on the force, Ricardo fears Lashonda will change and eventually bond with other cops behind the “blue wall,” where officers cover for one another and may conceal wrongdoing.

“I’m not saying she’s a bad person or that she’s going to want to be a corrupt cop, but when you’re in that position, sometimes the rookie cop just wants to keep his mouth shut and don’t tell on nobody at all,” Ricardo said. 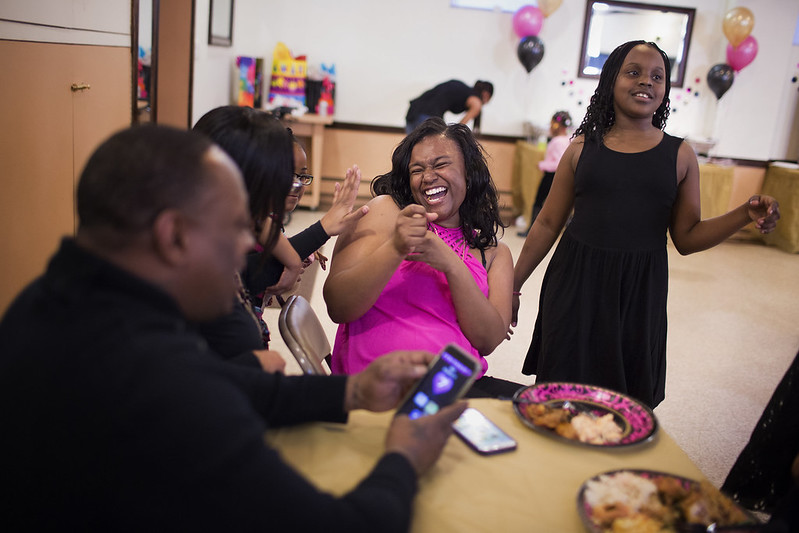 Lashonda Russell jokes around with her family, including her younger sister, Rihanna, during a birthday party for her great grandmother held April 8 on Long Island. | Kathleen Flynn, They Wear Blue Photographer

Lashonda is determined that won’t be the case.

“I’m not going to change. Some people are influenced by the people that are around them,” she said. “But I feel like I influence people around me.”

Ricardo said he’s already seen some slight changes in her, though. He said Lashonda now operates on a very strict schedule, though Lashonda said she’s always been that way.

Her mom defends her, saying that’s just the way she was trained at the academy. Lichele sometimes has to bring her back down to earth — like the time Lashonda rousted her little sister from bed.

“She came in waking up her little sister, like ‘Hey, you got seven minutes because we got to be A, B and X, Y, Z.’ I understand that this is the way y’all work, but we don’t do that in here,” Lichele said.

But Lichele has more hope than worry.

She said she knows Lashonda will continue to make an imprint on the Syracuse community.

— By Jasmine Gomez, reporter with They Wear Blue project