Dr. Joan Hillsman, who believes in the creative powers of music and the arts, has been embracing gospel music as a way to better her community.

Since her arrival in the Syracuse area a few years ago, Hillsman has been involved in several community projects, such as “Say Yes to Education,” and also has organized a Syracuse chapter of the Gospel Music Workshop of America.

“A lot of my work is volunteer,” Hillsman said. “I go to nursing homes to make sure that they’re able to experience music.”

Hillsman, 74, grew up in a sheltered environment in South Carolina, never meeting her father, who was killed fighting in World War II.

Education has always been at the forefront of Hillsman’s life, first as she grew up in South Carolina, then as she earned her bachelor’s and master’s degrees from Howard University in Washington, D.C., and ultimately as she earned a doctorate in musicology from Union Institute & University in Cincinnati, Ohio.

“Early on, I had strong values, strong values about education,” Hillsman said. “Positive values about being the best that I can be so that I can make good choices. But the main thing that my mother taught me was that you need to share what you get. Carry people as you go up and reach back and tell them how.” 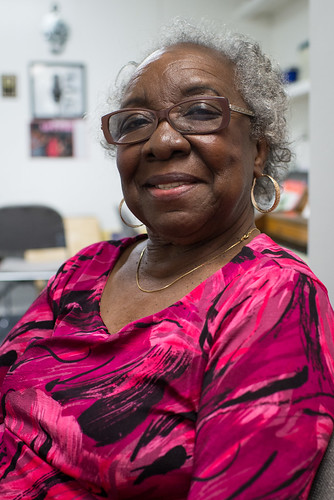 Dr. Joan Hillsman has worked on many projects since moving to Syracuse in 2009. She served on Mayor Stephanie Miner’s Arts Transitional Team, worked with Say Yes to Education and organized a Syracuse Chapter of the Gospel Music Workshop of America. | Sergey Korovayny, Staff Photo

Today, Hillsman continues with the same values and motivations that propelled her to offer her help through music. The classes and workshops that she offers are all part of Hillsman’s desire to view gospel music as more of an art form than a religious practice.

“I’m trying to take gospel to another level,” she said. “We love the history in it, but now colleges and schools and universities are embracing the culture. I find it very exciting because almost every week there’s some kind of festival, and you can plug into what you like and learn cultures through music or through the arts.”

Hillsman understands the financial struggles of families, and she says her singing and workshops have never been for financial gain.

“Nobody could ever … (be denied) my service because they could not afford me,” Hillsman said.

“Because in the end, if you’re really serious about it, I’ll do it for you for free. Sometimes people will come and ask me, ‘Well, what do you charge?’ and I say I’ll do it for free. Let’s talk about the fee later.”

In true “old-school” format, information on Hillsman’s work and workshops can be discovered through word of mouth or books she has written over the years. “You don’t get many people going online to see what I do,” she said.

Overall, the music teacher, who teaches out of her studio located at 4455 E. Genesee St., just wants to be there for members of her community, whether that means helping out through music or sharing life experiences with young people. From a young age, Hillsman was taught to display and represent herself in a way that others would aspire to do the same.

“It’s a responsibility to be a role model because everything is not going to be smooth,” she said. “Leave all your baggage back and go out and present yourself and what you do to people. Then the opportunity will come where you can see pitfalls you want to avoid.”

Hillsman’s support includes academic and music instruction, as well as community outreach to schools, which are all elements that have become valuable to the local community.

“We have to keep a vision of positiveness, a vision of sharing,” Hillsman said. “We need people to know that there is another way.”

— Story by Nate Band with interview by Stacy Fernandez