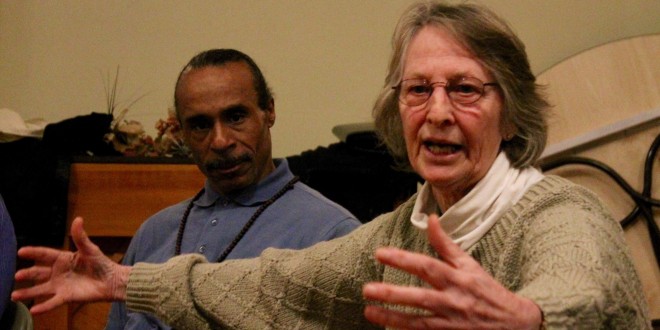 The Syracuse Inner City Rotary Club kicked off a new initiative to engage the community with its rotary chat: a monthly, informal session with a prominent individual in the Syracuse community.

For January, Aggie Lane presented information about the Urban Jobs Task Force, a nonprofit organization advocating for job opportunities for people, especially individuals from marginalized communities, as a way to combat poverty. On Monday night, Jan. 25 at Grace Episcopal Church, Lane addressed issues such as the organization’s negotiating with the city and county officials to ensure that publicly contracted jobs in the city provide opportunities for residents.

“We advocate, we push the envelope, and we try to make changes to the business as usual,” she said. “We’re pushing for all jobs but where we have leverage is where our tax dollars are being spent.”

Theardis Martino, one of the founders of the city chapter, said he decided on Lane for the community chat because he knows her leadership style.

“I’ve watched this woman come into our neighborhood, plant her roots and try to make a change,” he said.

Lane talked about the steps the Urban Jobs Task Force has taken to address unemployment and underemployment in Syracuse, such as meeting with Onondaga County Executive Joanie Mahoney. In the future, Lane said, the task force hopes to have influence on the Interstate 81 redesign, as well as the Onondaga Creek Walk project through the South Side.

The attendees included individual community members and representatives from organizations around the city aiming to improve the quality of life of residents. Among them: On Point for College, OGs Against Violence, PEACE, Inc., Onondaga Earth Corps and the Alliance of Communities Transforming Syracuse.

For Charles Rivers, a family counselor at PEACE, Inc. Eastside Family Resource Center, this chat was important for community members to come together and brainstorm resources and solutions for the problems in Syracuse. 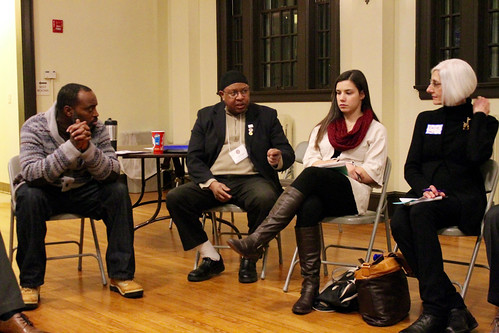 Abdul Shakir, a member of the Syracuse Inner City Rotary, poses a question about the role of ethics in hiring policies of companies that do work in Syracuse.

“I think we exceeded (the goal) tonight,” said Rivers, who also serves as the membership coordinator for the Syracuse Inner City Rotary. “People who would’ve never talked to each other now know each other, so now hopefully we will get more people to come in as our community tries to progress.”

The chapter president, Mary Eileen Wood, was satisfied with the turnout and said she was glad the circle of chairs grew as more people showed up.

“We see this as a catalyst, not as a goal or an end,” she said. “Our goal is to make the next thing happen.”