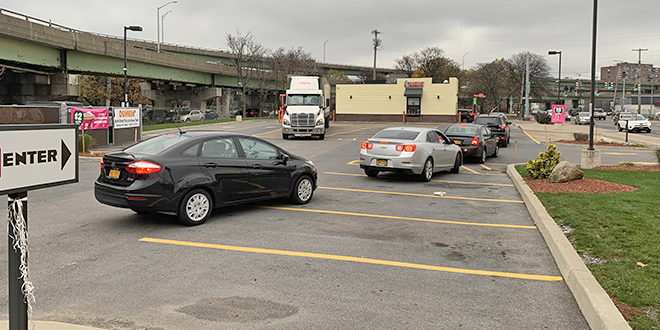 There’s a glimmer of hope for the popular Dunkin’ double drive-thru at Almond and Water streets. But here’s the catch. Once the I-81 overpass comes down, assuming it does, the store might stand somewhere else.

“They told us they can just pick it up and move it someplace else,” Shakeema Robinson, a crew member at the kiosk, disclosed to The Stand.

How Coolata would that be?

Franchise owner Tom Santurri confirmed the possibility of re-locating the 400-square-foot building, which he described as “only a slab.”

“You just have to jack it up, lift it and you could move it,” Santurri said. “We’re open to anything at this point.”

The store, which opened about five years ago adjacent to the elevated highway before the 81 decision process began in earnest, is unusual as a drive-thru-only business located in a downtown. Santurri said the location has a loyal “niche market” of commuters, with Robinson estimating that 800 vehicles a day visit. On a recent weekday morning, the wait was nearly 20 minutes even with both lanes open.

Under the Community Grid option favored by the state, this Dunkin’ and the overpass would be eliminated. The third-of-an-acre parcel of land is just one of four containing actual structures that would be seized by eminent domain verses 127 parcels that don’t have buildings.
The owner of the parcel, Developer Ed Wolak of Falmouth, Maine, a major Dunkin’ franchisee, has plans to add 14 apartments there, but that project remains on hold pending a final decision on 81.

At City Hall, the initial proposal to build the Dunkin’ prompted some head-scratching in 2013 given the uncertainty surrounding the future of the elevated highway. Some speculated that it was a money grab designed to artificially inflate the parcel’s value and leave taxpayers with the bill. Others countered that it was unfair to leave property owners in limbo, unable to develop their land as the 81 process dragged on for years.

Santurri said the company — like the public in general — is just waiting to see what happens. “Anyone familiar with eminent domain knows it’s not really a money-grab scenario,” he added.

Meanwhile, the long lines at Syracuse’s most unlikely Dunkin’ show no signs of disappearing, proof enough that the location was viable and perhaps a sign that by being light on its feet, this little Dunkin’ could outlive the elevated monster next door.