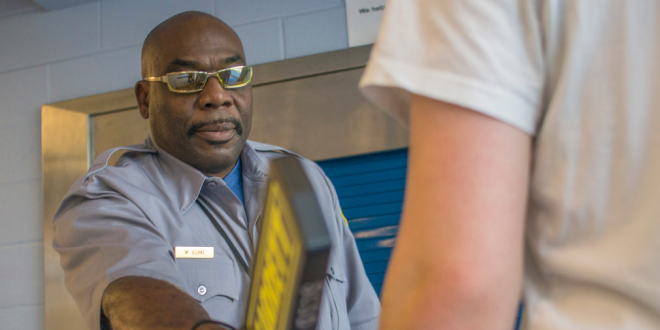 Syracuse high schools have been checking students daily for weapons for two months now, in response to the threat of gun violence locally and nationally, particularly at schools and colleges.

Thomas Ristoff, director of public safety for the Syracuse City School District, said the purpose of the security checks is to be “preventative and proactive,” since schools are affected by larger community problems. 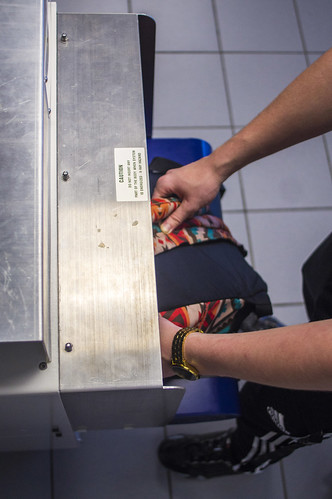 An Institute of Technology at Syracuse Central student pushes a backpack into the baggage scanner, which is meant to detect weapons, while school sentry Michael Burke checks the screen. | Photo by Leonard Adams

Since Oct. 5, all high school students have been required to pass through metal detectors, which screen them for weapons, before they enter the schools. Previously, students were required to go through random screenings. Now screenings are carried out daily; they begin at 7:15 a.m., and the goal is to be finished before the start of classes at 7:50 a.m., Ristoff said.

Mark D. Muhammad, a school board member, said schools are a microcosm of the larger society. He cited the mass killing June 17 by a white assailant in a predominately African-American church in which nine people died.

“The sore reality of having to search and have security is just what it is — it’s a reality,” Muhammad said. “Not just in urban America, but in America. So we just have to get used to it. I think if everybody is searched, the students will be much more comfortable being in school.”

Muhammad also said he spoke with parents who said that the only reason their children were carrying weapons was because other students had them.

Jaime Alicea, chief operations officer for the school district, said it took students awhile to get through the screening process at first, but that the process has since gone more smoothly. The exception is at Henninger High School, 600 Robinson St., where the student population is the district’s highest. The school has nearly 1,700 pupils, according to the guidance office at the school.

More equipment is being ordered to deal with that; there currently are two search stations, and there will be a third station when the new equipment arrives, which is scheduled for shortly after Thanksgiving break, Ristoff said.

There is still a class tardiness issue at Henninger because it is the most populous school, Ristoff said, but this varies, depending on when students arrive to campus and go through security. Students could show up at the security stations either one minute or 10 minutes before class, and this determines whether they make it to class on time. The department of safety has little control over this issue, Ristoff said.

Students and staff members have gotten more accustomed to the searches, Ristoff added, and students have been helping, for example, by putting their cellphones in their backpacks before entering school.

Joyce Suslovic, a teacher at Henninger, said that tardiness to class occasionally causes a distraction, but that the screening process has been streamlined with more personnel since the first couple of weeks.

“Nobody likes to say this, but it’s not a major source of delay to students,” Suslovic said.

Public safety is using sentries from different schools to assist with the security procedures, and the department is going to seek help from teachers to get bags through the scanners faster, Alicea said. And, he added, after the screening process at high schools has been established, the department plans to go back to doing security checks at middle schools once or twice a month.

The daily searches were supposed to begin at the start of the school year, but there was a delay until October because members of the department of safety wanted to go to New York City first to observe how the searches are carried out at schools there, Alicea said.

Superintendent Sharon L. Contreras said that anybody who walks through the school buildings at any point in the day goes through metal detectors, and it is not just a morning procedure. In addition, security forces check the school grounds for weapons. The searches are strictly for weapons, but students could be charged if they have drugs or other prohibited items, Contreras said.

Security is recovering very few weapons, and they usually are items such as pocketknives and pepper spray, Ristoff said. He added that students are usually told to carry weapons by adults, and it is because they are worried about city violence, rather than school violence. Many students walk to school and pass by neighborhoods with high crime rates, he said.

Maxwell Ruckdeschel, a school board member, said parents and community members were surprised by the decision to install security checks at schools, and were not ready for it.

Ruckdeschel recalled being confronted in a grocery store by a mother of two students at Henninger High School, who asked him, “When did my children start going to school in prison?” He described his reaction: “I think that’s what the fear was, that maybe she didn’t know something about how dangerous the schools are,” Ruckdeschel said.

Weapon searches have been going on at schools in the district since the 1990s, said David Cecile, a school board member. The schools would receive faxes or calls every month telling the administration to pick two days to perform random searches, he said. Parents were as concerned then as they are now — wondering why the searches were happening. 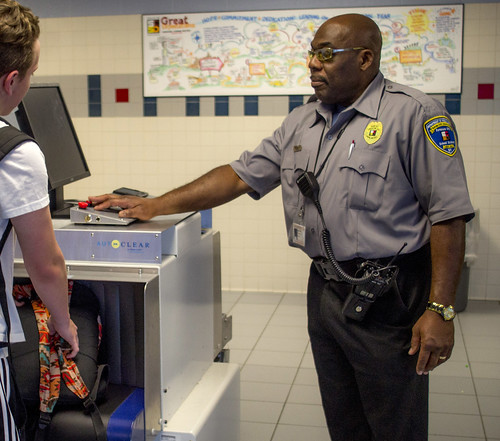 An Institute of Technology at Syracuse Central student pushes a backpack into the baggage scanner, which is meant to detect weapons, while school sentry Michael Burke checks the screen. | Photo by Leonard Adams

“I tried explaining to parents that it is protecting your kids, it’s protecting your staff,” Cecile said. “You should feel good that we are doing it. Unfortunately, it is a way of the world right now.”

Bridget Kent, a student at Institute of Technology at Syracuse Central, 258 East Adams St., said the security checks are important for safety purposes.

“I think it’s a lot safer, because of all the shootings going on. But then again, it kind of is difficult because not a lot of us are on time to classes now,” she said.

Dante Geddes, another ITC student, said the security is helpful, but that it should be carried out twice a week.

“I don’t think it’s changing the school much and making it like a prison. I just think it’s unnecessary,” he said. “Not every day.”

Marcus Jacobs, an ITC student, agrees with Geddes that a daily search is too much, although he acknowledges that it is useful in making students feel safer. He said that many of his peers have mixed feelings about it because it makes them late to classes.

“It does affect school attendance most of the time; not just with me, but with other students here around the school,” he said.

While class tardiness in high schools might partially be attributed to school security, Ristoff said other factors are that students could be stopping at their lockers, talking to their peers and/or going to the cafeteria. Some students also move slower than others, he noted. The department of public safety tries to help solve the issue by sending notifications to parents, encouraging students to put cellphones away and limit conversations while in the security line.

Contreras said she does not take the decision to implement security checks lightly, and that it was one of the hardest decisions she had to make.

“I don’t want Jonathan going through — my own child — going though a metal detector, but I can’t control anyone’s actions. I can just do the best I can to make sure the students are safe,” she said.

Muhammad said that if students were determined to have weapons, they would find ways to keep them outside school. But, he said, it is essential to make sure there are no weapons in the community at all.

“It is not a school district problem, which I continue to say,” Muhammad said. “It is a larger city problem, nation problem, that we have to address as a community.”

— Article by Rawan Ashoor, Urban Affairs Reporter for The Stand