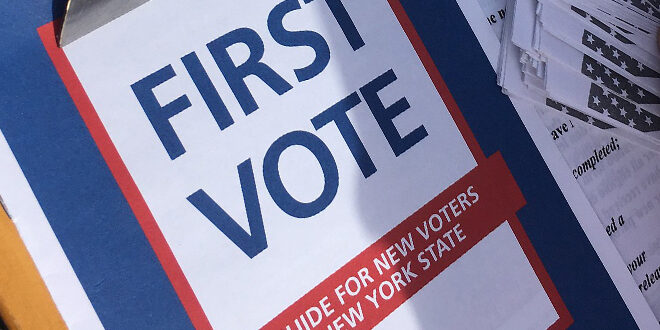 Board of education candidates Karen Cordano and Twiggy Billue shared their visions for Syracuse City School District and the city at large in an in-person voter forum held Tuesday evening at Syracuse Community Connection.

Gia Palermo, also running for a spot on the school board, could not attend for personal reasons. Republican candidates Michael Hunter and Susan McCormick, as well as Democrat Nyatwa Bullock did not attend.

Unsurprisingly to either candidate who was president, residents who submitted questions to the forum mainly asked the pair, who are both running for the role of commissioner of education, to consider SCSD’s role in the community beyond just the scope of education in the classroom.

The forum’s very first question, presented by moderator Lanessa Owens-Chaplin, who serves as assistant director for the New York Civil Liberties Union, asked both candidates to share their perspective on parent responsibility and youth violence in the city.

“The kids are not alright,” said Cordano, endorsed by both the Democrat and Working Families party. In its current state, she sees Syracuse’s public school system suffering from a lack of funding, residual racism and a lack of prioritizing the needs of students of color.

“Our kids are forgotten by society unless they are perceived as a problem,” added Cordano, stressing the importance of making parents feel welcomed in school board conversations.

Billue, who is endorsed by both the Democrat and Working Families party, hopes to improve the district’s relationship and communication with parents of current students. SCSD consistently underperforms in terms of parent and community engagement, Billue said, and she hopes to change that.

Cordano and Billue also reflected on current discussions on replacement of the I-81 viaduct with a community grid. The release of the Draft Environmental Impact Statement rekindled residents’ anxiety about construction and displacement, Billue said.

For example, for parents of students attending STEAM at Dr. King Elementary school, a district building located just 150 feet away from the viaduct, the thought of construction close to the school or an ensuing land grab after the project’s completion is jarring, Billue said.

Ultimately, the district will need to listen to parents and students to effect meaningful change, Billue noted.

“If we don’t listen to (students) … if we continue to minimize their experience, then we’re seeing behavior that we can’t quite explain,” she said.. “Maybe it’s because … we didn’t hear them when they said this hurt. Maybe it’s because we haven’t dealt with the trauma they’re seeing in their neighborhood, not just by police but by community violence.”

There is also a need for well-informed solutions in the city’s new approach to preventing and monitoring lead poisoning among students, Cordano said.

“You are perpetuating the cycle of poverty by not addressing the issue of lead paint,” Cordano said. “So yes, there can always be more done with that.”

Cordano and Billue both emphasized the importance of transparency between the board of education and parents. Both also highlighted the importance of maintaining communication with parents as updates become available, especially in light of how the district informed Henninger High School parents about recent school closures.

Cordano and Billue’s responses throughout the night appeared dedicated to assuring parents about their childrens’ futures and the viability of their own hopes for the Syracuse community.

In this vein, the candidates touched on concerns about district-wide college preparedness for high school seniors, charter schools and the importance of hiring and retaining Black teachers as well as additional instructors of color.

The idea of having mandated school uniforms, another question raised during the forum, did not resonate well with either candidate, unless the district will work to make uniforms equitably accessible to students.

Cordano and Billue were split on the efficacy of The Syracuse Latin School, an elementary and middle school for academically gifted children. To Billue, the Latin School and its gifted program model works well for rewarding talented students. To Cordano, the program simply takes away resources from other schools that could be better utilized elsewhere.

Both Cordano and Billue identified a common need for increased parent and student involvement and representation in district conversations. Cordano hopes for the school board to visit every school in the district to directly engage parents. Billue hopes to help create and involve a student board in board of education affairs.

Regardless of what takes place next in district politics, Cordano and Billue agreed urgency is key in whatever actions come next for the future Commissioner of Education. Both vowed, if elected, to prioritize anti-racism and equity.

“I believe now is the time to create change in the district and give our children the support they need to succeed as adults,” Cordano said in her closing remarks.

“We have the future of the district in our hands,” Billue concluded. “I also want to say that we have only us to blame for the condition that our schools are in now.”

Onondaga VOTES! and the Greater Syracuse Southside Neighborhood Association organized this event.  The next Talk Tuesday is a mayoral candidate forum held from 5:30 to 7:30 p.m. Tuesday, Oct. 5, at Well of Hope Church, 1642 South Ave.