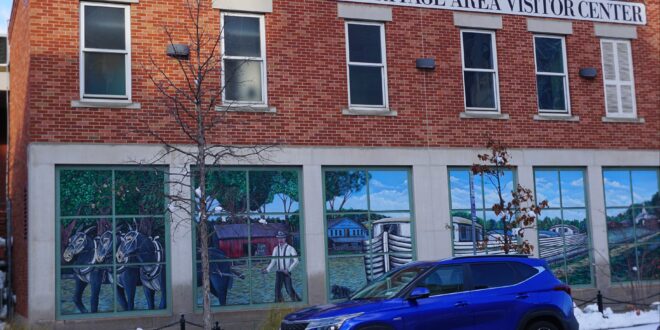 Transportation has evolved throughout time. The Erie Canal, a human-built waterway, was the United State’s first big infrastructure project.

You can imagine it as a highway for boats.

Since its opening in 1825, the Erie Canal rapidly transformed its surroundings. The environment, transportation, communication and commerce of New York would never be the same again. These changes occurred from the sudden new possibilities for interaction between people, goods and ideas.

We, at the Erie Canal Museum, believe that this history is not discussed often enough, especially its complex relationship to the present.

In the 1950s, new systems of highways were growing throughout the country. New York State considered building the interstate highway, I-81, right over the Weighlock Building and Syracuse City Hall. A powerful group of locals, predominantly white, organized politically to save the building and were successful.

Unfortunately, the next group to protest the construction of I-81 over their own homes was not listened to in the same way. The 15th Ward, one of Syracuse’s primarily Black communities, was irreversibly demolished.

It is in this context that we, at the Erie Canal Museum, reflect on our entangled relationship to the past, present and future of the United States. We acknowledge that the museum stands while the 15th Ward no longer does. We strive to understand and reflect a more accurately diverse narrative of the Erie Canal through much needed research, programs and exhibits. This commitment began in 2020 and will continue to be a driving focus, but we need your help and input.

In 2022, the Erie Canal Museum will focus on the transforming effects that major infrastructure projects have had and continue to have on Syracuse.

Renée Barry is a research fellow at the Erie Canal Museum. She may be contacted at research@eriecanalmuseum.org