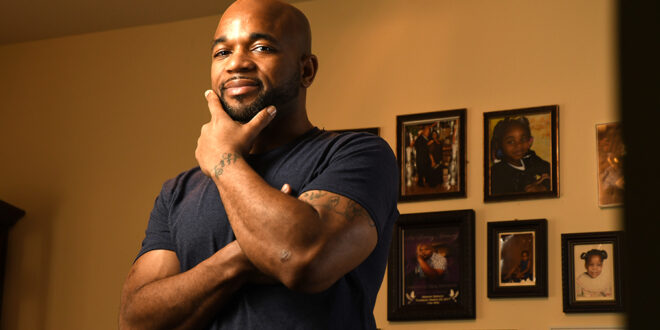 Habakkuk Nickens recently returned home from prison and will contribute a column to share his re-entry story. | Mike Greenlar

Being here, right now, still feels unreal. Nothing compares to the feeling of having my freedom back.

Last month when the correction officer showed up at my prison cell and asked: “Nickens, do you want to go home today?” I took it as a joke, until he followed up, telling me: “Pack your stuff. You should be out of here by 3 o’clock.”

And sure enough, I was. The date was May 3, and I was released suddenly because of the First Step Act originated in 2018, but not fully implemented until 2022. It provides eligible inmates the opportunity to earn credits by participating in recidivism reduction programs. The earned credits can be applied toward early release. Created for non-violent offenders, the law saw many changes, eventually offering help to offenders like myself. This led to my immediate release. After serving 10 years and two days, the moment I had been waiting for was finally here.

Walking out of the front entrance of the Federal Correctional Institution at Beckley in West Virginia without cuffs felt abnormal. A taxi was called, and 10 minutes later I was on my way to the bus station, waiting for a Greyhound. During the six-hour wait, I walked around the small town, stopping in a gas station, a McDonald’s and a Family Dollar, buying all the junk food I haven’t experienced in a decade. I spent $50 on food alone.

I found the bus ride to be soothing and relaxing. It wasn’t until the next day, May 4, that I made it out of one state and to the next, since my bus didn’t arrive until 10 p.m.  My route went from West Virginia to Columbus then Cleveland, Ohio and onto Buffalo, New York, and finally home: Syracuse.

In total, I spent 48 hours riding in buses.

To an average citizen this would have been exhausting, but to me, I viewed the trip like traveling in some beautiful, foreign country. I met one couple who were so strong in their faith and love of God that they felt compelled to help me in my situation. The husband gave me the jacket off of his back and an extra hat that he had. I wasn’t cold, but he felt this is what God wanted him to do.

That’s when it started to sink in that I’m not in prison no more. I’m around all sorts of people, some who have compassion, empathy and love.

I took it as a sign that I was supposed to be free.

My bus from Columbus to Cleveland was delayed — scheduled to leave at 8 a.m., it didn’t arrive until 6 p.m.

Still, this was no bother to me. I was free and nothing was going to take that joy from me.

My mother met me at the bus hub in Syracuse and cried as soon as she saw me. The feeling of this is real started to set in.

When we got back to her house, my 17-year-old daughter was asleep and I tiptoed into her room, calling her. She awoke, barely able to see me. In a low tone, she said “dad” and then realized it was really me. She started screaming “dad!” while crying and holding me in a hug.

Reality really started to kick in. My brothers greeted me with long embraces, and my 19-year-old son cried in my arms with tears of joy. My youngest, my 14-year-old daughter, held onto me with a happy, uncontrollable cry. She would not let me go.

In this moment, I felt how much my presence had been missed by my family.