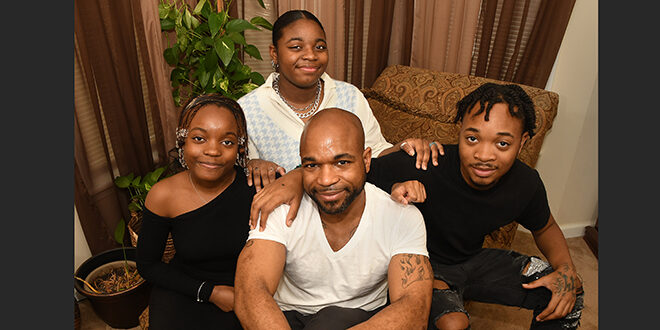 Habakkuk Nickens and his three children, from left to right, Ariahanna, Aaliyah and Habakkuk Jr. | Photo by Mike Greenlar

The Pain of Prison

I never knew how much prison could affect a child until I got home to really witness it for myself.

Rebuilding a relationship with my youngest child by far is the hardest part of my reintegration process. I left when Aaliyah was 4, at an age when all she wanted was her dad. I couldn’t leave her side. She had to sleep in my arms to fall asleep. I couldn’t leave the house without getting a call from her mom to come back because Aaliyah wouldn’t stop crying for me.

Prison took all of that away!

When I left, a huge part of Aaliyah left also. A child that was an extrovert became an introvert. A child that had so much spirit, now isolates herself. Now that joy that was once there for her dad struggles to show when she’s around me.

I called my children more than any other prisoner during the time I was incarcerated, but I see, that still wasn’t enough. A parent being snatched out of a child’s life with no warning — with no cushion to soften the blow — affected her deeply.

The reality of it all: she was so young when I left that she has forgotten how close we used to be. My time away, pushed her away. Since I’ve returned home, I work to reclaim my position as her hero, but she resists. The 4-year-old I once had, is now 14. It is difficult to rebuild what we had, so I try to be strategic with how I talk to her, correct her and love her. I don’t want to be too hard on her with discipline and run her away. I don’t want to just buy her things and have her think I can be used to get stuff.

Instead, I try to spend time with her, so we can relearn each other. We have our ups and downs. It’s a daily struggle.

The effects of being in prison didn’t just affect me but affected my kids more because they grew up without that balance of love from a mother and father. I now struggle to replace it.

I missed many of Aaliyah’s special moments. I was absent to help with Aaliyah’s growth and development. Sometimes I feel like a stranger to my child, because she really doesn’t know me; however, I’m not giving up on fighting for my position as the father she once couldn’t be away from.

It’s my responsibility to rebuild what we once had, so I’m not letting nothing come between me and family again. I will keep you posted on the progress I make as time goes on.