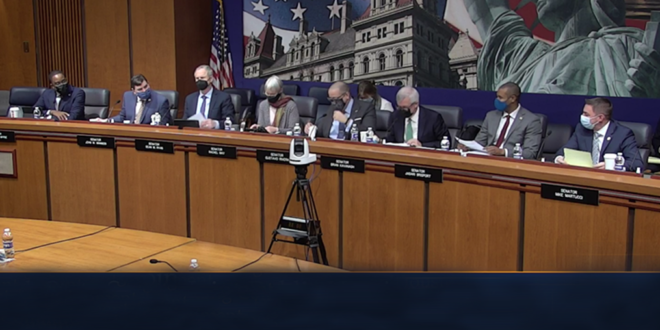 Senate Hears from Stakeholders on How to Address Childhood Lead Poisoning

Elected leaders and state health officials heard from several advocates during Tuesday’s State Senate hearing on childhood lead poisoning, seeking input on how the state can address this problem.

The Nov. 29 event marks the first time since 1994 the State Senate has held a public hearing on the topic. The hearing — said Sen. Gustavo Rivera, D-Bronx, who moderated the discussion and is the chair of the Senate’s Health Committee —  served as a way to further understand the issue and ask health representatives and advocates about the types of resources that could address lead poisoning in children ahead of incoming state budget negotiations next year.

The consequences of high exposure to lead are grave and can include changes to children’s brain development, reduced attention span and reduced educational attainment, according to the World Health Organization (WHO). New York State Center for Environmental Health Director Gary Ginsberg said during the hearing that 4 out of every 1,000 children tested in New York exhibit concerning blood lead levels. In Syracuse, 1 in every 10 children tested are found to have elevated blood lead levels, according to data from the Onondaga County Health Department.

“The caseload starting in October 2019 tripled just by going from 10 micrograms per deciliter down to 5,” said Ginsberg, explaining the surge in cases which multiplied when the state reduced its “level of concern” threshold. “Our immediate goal is to get through that case management, especially now during the pandemic. We have provided local health departments with a lot of tools to make their process of investigation, outreach and follow up more efficient.”

Despite the recent surge in cases, Ginsberg said the state has not provided further funding to localities to manage the increased caseload.

“No matter how well intended a policy may be, it will have little value if it cannot be properly implemented because of resource limitations,” she said, noting local health departments are already stretched thin due to the COVID-19 pandemic and an unanticipated wave of public health staff retirements. “Effective policy must be predicated on our state leaders willingness to provide the sustainable and flexible fiscal resources needed for that implementation.”

“The pandemic presents serious risks to children, including increased risk of lead poisoning due to reduced lead testing,” said Ravenhall, adding children remaining indoors for prolonged periods of time can lead to extended exposure to lead.

The state currently provides $8.7 million in funding to local county health departments through its Childhood Lead Poisoning Prevention Program (CLPP) in order to bring environmental health experts into residents’ homes to assess the threat of lead poisoning. Ginsberg said the program has helped conduct more than 100,000 preventive lead inspections in homes across the state.

“The CLPP is a primary prevention program. We fund local health departments to identify neighborhoods that tend to have high blood lead levels, conduct surveys and walkthroughs, and do investigations in the homes,” he said.

In order to deal with the expanded caseload, Ravenhall said county health departments estimate they would require a state investment of $30.3 million to hire staff through the CLPP grant program and effectively conduct lead inspections.

In Onondaga County, residents who may be at risk of lead poisoning and own or rent a house may contact the County Health Department at (315) 435-3271 to find out if they qualify for a lead inspection. Residents can also dial the same line to find out if their children may need a lead test. Requests may also be sent via email to leadfreekids@ongov.net. or mailed to the Onondaga County Health Department, Lead Poisoning Control Program, 421 Montgomery St., 9th Floor, Syracuse, NY 13202.

A main subject of discussion during the hearing focused on the aging housing stock in cities across the state that used lead paint before its ban by the state in 1970. A federal ban was enacted later in 1978. In Syracuse, 91% of rental housing was built before 1980, according to U.S. Census Bureau data.

“There are water issues and a lot of other problems, but we need to keep a focus on the basic way most children are being poisoned and try to develop plans where we don’t have to have the county health department come in after the children have been poisoned in their home,” said Sen. Sean Ryan, D-Buffalo.

Cities like Rochester and Syracuse have taken steps to invest in routine inspections of rental housing, as well as reporting potential lead hazards in the cities’ respective rental registry. In 2020, Syracuse passed the Lead Abatement and Control Ordinance that allocates funding to help test and remediate high risk homes, particularly properties built before lead paint was federally banned. It is unclear at this time if the city has started enforcing the ordinance. City representatives could not be reached for comment.

Oceanna Fair, a childhood lead poisoning prevention advocate with Families for Lead Freedom Now! representing Syracuse’s South Side, has seen the effects of lead poisoning firsthand. Her brother Bobby Boyd Jr. has dealt with them for 40 years.

“He is dependent on my siblings and I to step in, and he needs our help with everything,” Fair said. “We need to help him with everyday decisions that a lot of us as adults take for granted.”

Fair, who delivered a personal testimony during the hearing, said her organization has reached more than 1,000 residents via canvassing, tabling at events or linking up with other community organizations.

“I think we have a lot more families now that are starting to be vocal,” she said in a recent interview. “Families like mine, and families all across the state who are asking: ‘Hey, why is it that after more than 50 years we are still dealing with this? Why is my child now ill from a problem that a lot of people assumed was no longer an issue?’

While the old housing stock in the city presents significant challenges, Ginsberg said aging highways and bridges exacerbate the issue due to the use of lead-based paint in their construction. Ginsberg added traces of lead can mix with the soil in areas adjacent to the highly trafficked roadways. In Syracuse, a report from the New York Civil Liberties Union (NYCLU) on the environmental and socioeconomic impacts of the state’s proposed $2 billion Interstate 81 replacement project attributes the rate of lead poisoning in the city in part to the use of lead paint on the viaduct and the lead dust it has generated.

“We tested for lead in my backyard, and there was considerable lead from I-81, presumably,” Sen. Rachel May, D-Syracuse, said at the hearing. “I was told that tracking lead-infested dust is a primary way in which children are poisoned.”

Fair noted she would like to see the state stress to contractors who will end up working on the project of the need to follow lead poisoning prevention strategies.

“We are asking the state to ask the contractors (who are going to work on the project) to put in protections to specifically protect our children from the lead dust,” Fair said. “The way the bridge is demolished and replaced is going to be a big deal. We need to be protecting the children that live in nearby public housing developments and (attend) the nearby STEAM at Dr. King Elementary School from any lead dust that makes it into the air.”

Additionally, construction laborers who work on the eventual replacement of the aging highway should avoid bringing lead-tainted dust into their homes, Fair said.

The story of I-81’s initial construction through Syracuse and now its replacement is marked by the displacement of communities of color, which Fair said are those already disproportionately impacted by the various factors that contribute to lead poisoning. According to data from LeadSafeCNY, 27% of children tested for lead poisoning and living in census tract 54, which includes neighborhoods adjacent to the highway in the city’s South Side, exhibit blood lead levels at 5 micrograms per deciliter or higher.

“We know lead poisoning still predominantly affects Black and Brown children. This is just another hit to that population that is still living with other issues, such as concentrated poverty, in our area,” she said. “Now, they also have to deal with (the threat of lead poisoning), which essentially robs a lot of our children of their futures.”

At least 40% of residents living in the majority of neighborhoods surrounding I-81 live below the poverty line and at least 50% of the population are people of color, according to data from the CNY Fair Housing report.

Aside from the implementation of the ordinance, Fair would like to see a massive effort from the state to educate Syracuse residents on the perils of lead poisoning. She would like to see health professionals, school districts, landlords, politicians and affected families gather for a roundtable to problem solve.

Other efforts include LeadSafeCNY’s initiative to replace exterior doors and windows in rental units occupied by low-income individuals. The organization has distributed grants to the tune of nearly $1 million, helping replace 600 windows and 79 doors, as well as aiding in the development of 60 new safe and affordable rental units, according to a release issued by the organization earlier this year. LeadSafeCNY has also conducted approximately 41 training sessions on the appropriate removal of lead paint.

Fair said while she’s felt optimistic, she would like to see greater action on preventative measures.

“I know we have a ways to go,” she said. “But it can be done. We just need to get those mechanisms in place to do it.”