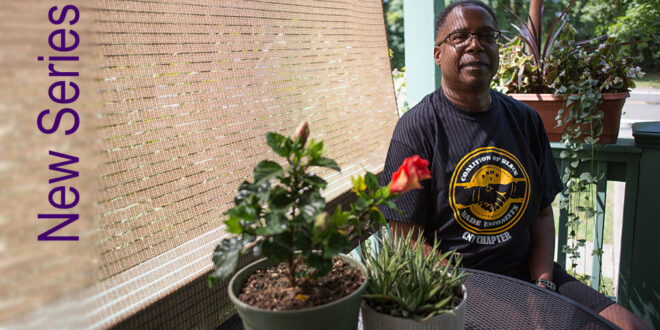 Working to provide a voice for all workers, King Davis, 64, chapter president of the Central New York Coalition of Black Trade Unionists, aims to help its members improve economic development and employment opportunities.

Davis has been involved with CBTU since the early ’90s, and helped reinstate its charter, which had not been operating since that time. Before his term as president ends in 2024, Davis wants people to know that CBTU is an organization for everyone and will work with anyone interested in obtaining a job in the skilled trades.

In this new series on minorities in the skilled trades, Davis sat down with The Stand to discuss what can be done in order for younger generations to enter trade work, noting a main barrier is a lack of marketing for the field, as well as resources to obtain jobs.

Q. What drew you to this career path?
A. I was a New York state employee and member of the Civil Service Employees Association in 1986. Working for New York State, I became a CSEA representative, a union representative for my workplace. This got me involved in the field and made me realize I could be of help. By helping one person, that would sometimes help other people. I enjoy helping people, and the union was one way to do that. I had to retire early from my job because of a problem with my hands, and I had decided that once I was able to, I wanted to get back involved with the Coalition of Black Trade Unionists because they’re about being able to get good jobs without having to go to college.

Q. How did you get involved with the union?
A. When you’re a state employee, you either have to join the union or they take what they call “agency shop”(where employees pay service fees to the union to cover the cost of collective bargaining). So, you pay your dues. I wanted to join a union. I realized that the union is its members, not the people in Albany or whoever is sitting in the office. The unions are the members, and without the members’ support — member activism — the union can’t survive. That motivated myself to help the union, in turn help the members and hopefully, steer others to get involved. That includes helping people get union jobs, because when you have a union job, you have security and benefits. It’s almost like you have another family.

Q. What type of work did you do for the state?
A. I worked for the Workers Compensation Board. I started out as a clerk, and I worked my way up to a senior examiner by taking tests. With union jobs, especially with state government jobs, you can take tests to move up. Once you’re in the door, all you have to do is look for tests that you’re qualified to take. If you do well, most likely you will be added to the promotional list. It doesn’t require years and years of college. A lot of kids are discouraged today, because all they talk about is college and how expensive that is. Most can’t afford that, especially here in Syracuse. We have almost over 50% of the population — the minority population on the South Side — living below the poverty level. To me, that is outrageous. With the I-81 project coming to Syracuse and all the jobs that it’s going to bring, I thought now is the perfect time for the CBTU to be involved in the community again. I want to steer these jobs towards the people that really need them, people that were shut out 50 years ago when they constructed I-81. Now I’m trying to make sure that doesn’t happen again. I had advantages growing up that are just not available today. So, anything I can do to help people better their lives … to me, that’s what life is about.

Q. You were able to sustain yourself financially without a college degree?
A. I dropped out of school when I was in the 11th grade. I was 16. I said, “I’m done with this. I didn’t feel challenged.” I went to a two-year college when I realized after a couple of years that I’m not going to get ahead without some sort of background. I went to Onondaga Community College, completed my associate degree and then got a civil service job. I was able to help people and earn a good paying job where I can move ahead … there’s stability in these jobs.

Q. Was there anything that surprised you when you joined the union?
A. Many think the unions take your dues and you don’t get anything in return. But, you have support. They can’t just come in and fire you. The unions have rules and regulations. Without you, there will be no union. That’s something we try to promote.

Q. Do you see change?
A. I see some. People are starting to get more involved. Usually, it’s always been the same faces. Whenever I’ve been on groups, committees or in meetings, it’s usually the same people. But, now I see new members, some younger members in different organizations and meetings. What’s been happening across the country, the George Floyd movement, people actually seeing what’s going on, with cell phones and everybody videotaping … People can actually see it. I see some changes coming, momentum coming. But, it’s not quite enough. I’m hopeful that it keeps building and gets stronger.

Q. What advice would you give to young people?
A. Take the civil services exams. That’s how I got my first job. A lot of jobs still only require a GED or high school education. As long as you take the test, you have a chance to get your foot in the door. Once you’re in the door with a government job, you can bid on other jobs and take other tests … without a four-year degree, without ever having to go to college, you can bid on jobs and move ahead.

Q. What are some of the barriers to this work?
A. A main barrier is people not knowing what’s available to them or how to find out where it is. One way to do that is to bring that information directly to the community, bring it to the neighborhoods and the people that need it the most. If we can make those available, then we can really start to move forward.