When I decided to do a story about the Blues on the South Side, interviewing Syracuse’s “Bluesman” Little Stevie Wolf immediately came to mind.

I also figured that while I was at it, I would finagle a guitar lesson from him as well. Wolf was happy to oblige as we jammed at his home and talked about the local music scene and his career as a Bluesman.

“I Feel All Right” by TheStand

Wolf, 65, originally from Greenville, Miss., is a multi-instrumentalist and front man for Stevie Wolf and the Blues Express, also known as the Blues Express. Greenville is the same part of the Mississippi Delta that produced a slew of other great Bluesmen like Muddy Waters, Pinetop Perkins, Little Milton, Earl and John Lee Hooker (cousins), B.B. King and Ike Turner.

Wolf knew many of these players personally. In fact, he toured the Midwest with the band Earl Hooker and the Soul Twisters, which included Pinetop Perkins. In a biography about Hooker called “Blues Master,” author Sebastian Danchin reflected on Wolf’s contribution to the band: “He was a hell of a drummer.” 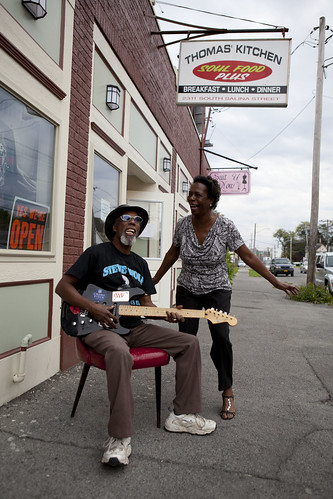 During his early years as a drummer, Wolf was afforded many opportunities to play with and learn from these Blues giants. Now, Wolf almost exclusively plays the guitar and sings. After years of being planted in a seat in the light of great guitar innovators such as Earl Hooker and others, he developed his own guitar skills. B.B. King once said that Earl Hooker, in his opinion, was “the best of modern guitarists.” Locally, Wolf is that type of talent. I guess it’s natural. He was grown from the same soil.

A South Side Blues story would not be complete without mention of the 2009 SAMMY Award winner Carolyn Kelly, who came to Syracuse from Dorchester, S.C., by way of Philadelphia, Pa., in the late 1960s.

Her first encounter singing in Syracuse outside of church was in the mid-1970s with The Soul Doctors. Their repertoire consisted mainly of R ‘n’ B covers of the hits of that era by Gladys Knight and Aretha Franklin.

After the stint with The Soul Doctors, Kelly started singing strictly Gospel. For decades, her conformance within the guidelines of religious dogma wouldn’t allow her to sing outside of the church.

In 2003 or 2004, all that began to change. Visiting preacher David Ushery prophesied that she would be using her talents in other venues.

Kelly began to pray on it. Around that same time, she started to get calls from her old friend Roosevelt Dean. He wanted someone to do backups for his Blues band. Kelly first refused, but eventually agreed.

“Carolyn is better than at least 99 percent of the national and international touring Blues acts out there,” he said.

“Slow Cooking On Hot” by TheStand

Kelly’s repertoire has changed a bit since The Soul Doctors. Instead of singing Rhythm and Blues, she now sings strictly Blues. The artists she covers in addition to her own pieces include Etta James and Denise LaSalle. She even throws in some male artists like Eddie Floyd.

— A Friendly Five is created and coordinated by Reggie Seigler to highlight the music and history of Syracuse’s South Side music scene. If you are a local musician and have an idea for a future column,
contact Reggie at reggie@softspokenband.com or call (315) 479-9620