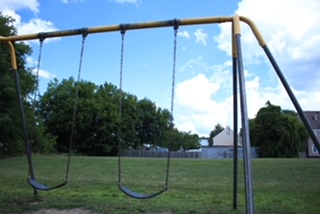 The Cannon Street Playground is located at 529 Cannon St. on Syracuse's South Side. | Natalie Rieth

South Side Park Expanding Thanks to $100K Investment

The playground at the Cannon Street Community Center has just four rusty swings, surrounded by an empty grass field and one netless basketball hoop.

But next spring, kids on the South Side will have a new playground with colorful themed equipment they select themselves.

Syracuse Department of Parks, Recreation & Youth Programs architect Brian Messe said the $100,000 makeover involves two separate installments. In October, a new colorful swing set with four standard seats and a baby seat will be installed. Then next spring, additional equipment will be added to complete the playground.

Efforts to renovate Cannon Street playground began in October 2021, Messe said. Since then, his team has collaborated with the community to plan a new playground with features that South Side kids say they want.

“It was a really good take-off point for dreaming,” city parks architect Alexa Geller said. “Because a lot of people, especially the youth, come up with ideas that we haven’t thought of.”

Most of the feedback gathered by the department came from an online survey that was promoted to South Side residents on Facebook, Messe said.

Residents could pick from netting climbing structures, textured playground features, exercise equipment and covered bench shelters. Additionally, participants could select color combinations and a theme, like space, sailing or exercise, that they desire for the new playground.

During the planning process, the department also held community meetings to offer a traditional printed survey and visual boards for residents to interact with. After observing pictures of equipment to select from, kids could place stickers on their preferred equipment. Each survey format was created with a simple and visual design to guarantee citizens of all ages and abilities could participate, Messe said.

Geller said a blueprint of the new playground will be shared with the South Side community by late fall or early winter. Looking at survey results thus far, she said rope climbers and exercise equipment were the most popular requests.

In the meantime, the project team is reviewing survey responses and connecting with vendors to find equipment within the project budget, Geller said. Funding is provided by the American Rescue Plan Act, or the COVID-19 Stimulus Package, according to the city’s website.

Messe said that a new playground will benefit South Side youth by providing a place to use their imaginations and learn skills such as balance, agility and problem solving.

“Some folks might look and see a playground as a place but there is a lot of childhood cognitive behaviors learned through a playground,” Messe said.