Every first Monday the South Side Tomorrow’s Neighborhood Today holds a meeting for residents, councilmen, business owners and organizations to discuss current neighborhood issues. At this month’s meeting, held Monday, Jan. 6, at the South Side Innovation Center, attendees voted on neighborhood projects, expressed concerns on the neighborhood’s poor reaction to current snowy weather conditions and heard updates from the Greater Syracuse Land Bank.

One voiced concern was about excessive snow on the sidewalks. Bob Dougherty, Syracuse Common Councilor for District 3, said pick-up truck snow plowers gather snow and leave it on sidewalks, then neither landlords nor tenants want to take responsibility to shovel. This buildup causes residents and children to move into the roadway.

“I don’t like seeing children walk on the streets because the sidewalks aren’t clear,” he said.

Walter Eiland, a resident and landlord in the neighborhood, said that if his tenants will shovel their own driveway and sidewalk then he would subtract their monthly cost and would be happy to provide them with salt and a shovel, but if they expect him to do it then the original cost remains.

Dougherty mentioned that he’s seen youth out with shovels offering to clear driveways and sidewalks, but residents turn them away. “So if some agency is able to send a kid out with a tag on them, or some publicity about that, then someone who can’t do it [shovel snow] might be more willing to let the kid do it,” Dougherty said.

He is especially concerned about the routes to schools.

“We shouldn’t be pushing elementary kids to walk on the streets because people don’t want to or can’t shovel,” he added. 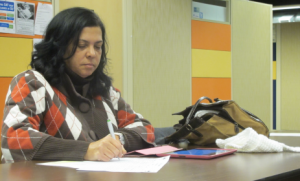 The corners of the sidewalks are piled high with snow, which is a problem when people cross roads, especially children. “You have little ones and no one can see them until it is too late, so it is a big concern,” Lori Covington, a TNT South Side facilitator, commented at the meeting.

Katelyn Wright, executive director of the Greater Syracuse Land Bank, gave updates about its current projects and explained the land bank’s mission to revitalize neighborhoods by reoccupying vacant properties and bringing them back to productive use.

She asked that residents help report trespassers by calling the number posted on signs placed at all vacant buildings. “We file trespass affidavits to the police for all of our vacant buildings,” Wright said. She also says police have the ability to arrest trespassers during afterhours without asking if the Land Bank wants to press charges.

She welcomes people to make an offer to the Land Bank’s listing prices for properties up for sale. “We don’t always sell it to the highest bidder, sometimes we sell it to the best qualified bidder who might be offering a little bit less,” Wright said at the meeting.

Wright talked about a big push of acquiring properties over the next two and a half years and hopes to hit every neighborhood in Syracuse. Within the next six to eight weeks, the Land Bank will acquire properties around Cortland Street, MLK, Furman Street, Kennedy Street and South Salina Street.

Covington shared concerns that the Land Bank is “approaching the more valuable areas and leaving the most desolate areas desolate,” in areas like Prim Rose and Ostrander.

On the other hand, Khalid Bey, Syracuse Common Councilor for District 4, and Wright reassured Covington that it is more practical to take on this tactic rather than start at the poorer areas. 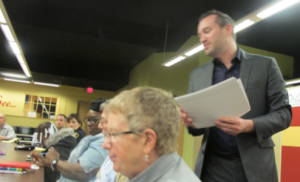 Luke Dougherty passes out the list of neighborhood project proposals.

“We intentionally started in the ones where they’re most likely to pay first because we wanted to build from more stable areas so we’re more likely to be successful, if we had gone the opposite direction there would’ve been a higher risk of failure and we might not have a Land Bank,” Wright explained.

Luke Dougherty, director of Community Engagement at City of Syracuse Mayor’s Office, reassured that all delinquent properties would be handled within two years. There are 131 properties in the inventory currently. So far, the city has sent out more than 1,000 foreclosure notices.

All previous neighborhood project proposals were passed for approval. Therefore, $5,000 will go toward putting bike racks outside of Brady Faith Center and the Southwest Community Center, to build more benches and landscaping in Kirk Park and add a roof for the batting cage at Wadsworth Park and a sensory garden constructed outside of P.E.A.C.E., Inc.

Also shared by Dougherty to the 18 attendees is that the annual Clean Up ‘Cuse 2014 is set for April 12. The information website will be up on Valentine’s Day.

– Article and photos by Vekonda Luangaphay, graduate student at the S.I. Newhouse School of Public Communications