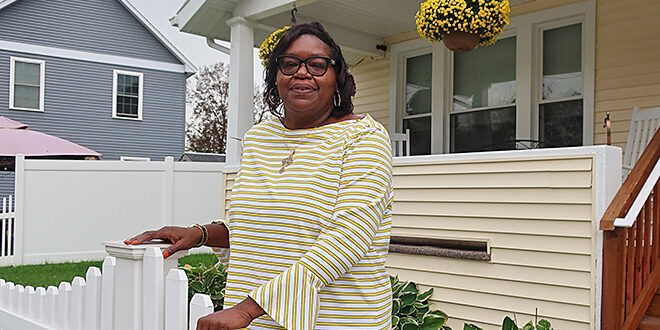 Denise Welch loves her house. She has her own sidewalk, her own driveway and her own fence. Not only does she own her home, but she also owns four additional properties on Baker Avenue. Five years ago, owning a home was nowhere on her radar, because as a single mom of two grown sons, a soaring rent increase had priced her out of her apartment.

After signing up for the first-time homebuyer program with her credit union and taking classes through the local nonprofit Home HeadQuarters (HHQ), Welch set foot in a refurbished home of her own exactly one year later.

Lifelong South Side resident Latoya Allen found herself frequently calling HHQ on behalf of residents in need of housing support when she was elected as a common councilor in 2017. HHQ’s CEO Kerry Quaglia noticed her commitment to the cause and recruited Allen onto his team. She became the deputy director in August of 2021.

Allen also completed home ownership classes to enroll in a lease-to-purchase program in which residents are given the opportunity to pay rent for a refurbished home while setting aside savings to purchase the home after a few years. Throughout this process, enrollees receive guidance from HHQ. After working through her own housing difficulties and taking the course, Allen is well-equipped to connect with those experiencing housing issues.

HHQ makes the transition from public housing or renting to homeownership possible for Syracuse’s residents. While the process is challenging, the nonprofit provides the support people need to learn how to utilize resources and change their lives, Allen emphasized.

The first step of the orientation is a budget sheet, where enrollees must write down every single purchase they make, from a new mascara to a television.

“That was an eye-opener for me when I did the orientation,” Allen said. “When I realized how much money I spend on Dunkin’ Donuts every morning … Seriously, I was like, I’m eating and drinking a mortgage payment.”

The homebuyer education class is eight hours in total. Guest speakers, realtors and home inspectors are brought in to help educate residents about owning a home for the long term.

“We are like lifers in this homeownership thing,” Allen chuckled.

HHQ goes a step further in its homebuyer initiative than simply providing classes and resources — it fully refurbishes homes and places residents who qualify through its program into the remodeled properties. HHQ works to update old units and also builds new units for its clients to live in.

After taking the course, Welch searched for a home with little luck. A property she initially hoped to purchase failed inspection due to radon. After more looking, she landed on a Baker Avenue house owned by HHQ. Soon after discovering the house, Welch’s realtor connected with the nonprofit. She signed the papers for her newly updated home in April of 2017.

Part of Mayor Ben Walsh’s Resurgent Neighborhoods Initiative (RNI) is to build about 200 new homes for Syracuse residents, mainly on lots where derelict properties have been removed. The project is broken into two phases. The first phase consists of the construction of single-family homes, 17 of which are on track to be built this year across various Syracuse neighborhoods. Next year, the second phase is expected to incorporate the construction of two-family homes by Housing Visions Unlimited.

“We are trying to bring back life into the neighborhoods,” Allen said.

Allen spoke to the organization’s dedication to entire neighborhoods. “We’re going to use this as an opportunity to help the other people that are on that street, too.”

HHQ works with Blueprint 15, a recently formed nonprofit focused on the revitalization of the East Adams Street Neighborhood. Its housing and development goals align with the work of HHQ, and Allen serves as a board member for the organization, furthering collaboration between the two. Arlaina Harris, director of community partnerships for the organization, also recommends HHQ homeownership courses and helps residents navigate the program.

Harris believes that homeownership is “one of the quickest ways to build generational wealth for your family.” She aims to “shift the narrative” and encourage residents, letting them know that while homeownership is challenging, it’s possible.

Harris knows that the forefront of many residents’ worries includes food insecurity, childcare and other immediate issues. This often causes homeownership to be put on the backburner or seem out of reach. Other residents who have lived in the same public housing complex for decades may not know about the homeownership process or believe it is attainable. Harris deems the solution is “financial literacy.” Once people can become educated about their financial options and learn how to arrange their finances in a manageable way, representatives from both organizations can help residents achieve their housing dreams.

“As a community,” Harris thinks, “We really just have to do a better job of making the information accessible and digestible so residents — just everyday people — can understand the language and understand what the process even looks like before they can make that decision.”

Welch hopes that her story inspires others to follow her on the path to homeownership. She excitedly mentioned that she recently planted trees on her property, and that what was once a new home surrounded by vacant lots and decaying houses has transformed into an up-and-coming neighborhood she is proud to call home.

“What I would tell anyone is,” she began, “if you can dream it, you can achieve it.”