New York state criminal justice authorities have given a nearly $400,000 grant to the nonprofit organization that runs the Southwest Community Center, at 401 South Ave., to develop anti-gun violence programs especially for women.

“We were thrilled that we received this award,” said Owens, who submitted the application for the grant last October. “It was a competitive process. They see the merit of our program.”

This is the largest of seven grants made to similar programs and community centers throughout the state, out of a total of $2 million that the state distributed, according to a press release from the New York State Division of Criminal Justice Services.

Owens said the goal is to empower women and reduce violence in the area. “We sent in our application asking, ‘What role can women play in the prevention of gun violence?’ It came from a very personal event in my life,” she said.

Owens said that when she and her husband were at the movies, she got into an altercation with a young man. Her 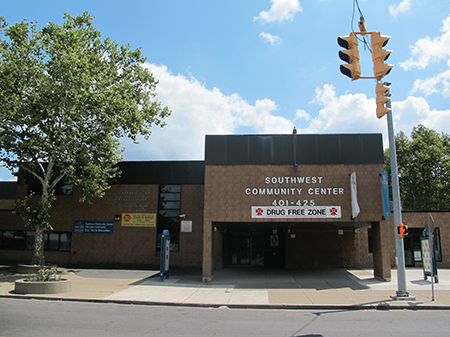 husband was confronting the man when Owens saw the woman who was with the man hand him a knife. This experience made Owens realize that women need to play a more active role in trying to prevent violence, which mostly involves men, she said.

Maurisha Stenson grew up participating in a lot of the programs at the Southwest Community Center, and she sometimes volunteers. She also works as the director of another program, Team Building Strong Positive Minds, in which much of her work deals with teaching and empowering young women and girls. Stenson said that even though she does not know much about the grant or the program, from her experience she thinks Owens’ approach is a great idea.

“It starts at home with your mom and girlfriend,” Stenson said. “Women can influence men in so many ways. It’s important that they know that. Whether it be positive or negative, they have an influence.”

Mary Anne Ciccarelli, the director of Human Resources at Syracuse Model Neighborhood Facility, said she thinks there has been a great community response to the programs that the center runs. “There has definitely been an increase in traffic over the past seven months,” she said.

Jean Reilly, project director for Family Planning, a program with Syracuse Model Neighborhood Facility, said she thinks the facility is a critical part of the community.

“There is a lot of effort at Southwest to look at the community needs and respond to them,” Reilly said. “The funding they are getting will help solve a lot of community issues.”