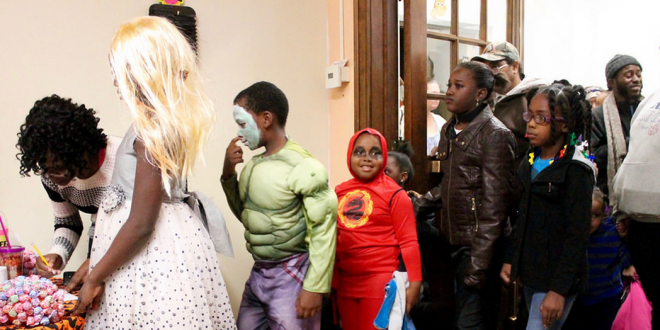 For the Eighth annual Halloween Spooktacular, Beauchamp Branch Library provided a safe environment for children to dress up, play games and take pictures. 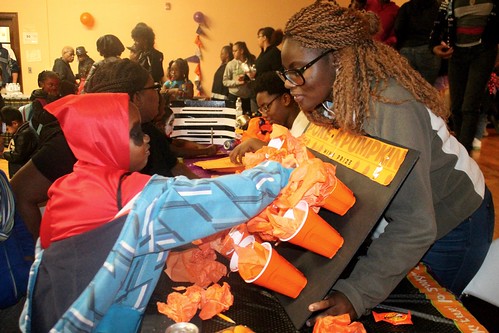 In the Poke-A-Pumpkin activity, Kahyri, 6, claims the contents of whatever cup he chose, which was a handful of candy.

Christine Richie, a library staff member, was the coordinator for the Oct. 29 event, and said that this year she added a larger variety of games. Richie enlisted the help of friends and regular library patrons to volunteer, pass out food and run the activity stations for the kids.

Attendees ranged from infant to young adult and chaperones included parents, aunts, uncles and siblings. Richie also said that more teenagers attended the event, possibly because many of them were volunteers and invited their friends to come.

Torlithia Stevens, dressed as Minnie Mouse, brought her 4- and 6-year-old daughters to the Spooktacular for the first time, although she said her daughters visit the library all the time. Stevens appreciated that the event existed, giving kids an outlet to celebrate Halloween.

“The fact that they even did it was alright with me,” she said. “It’s somewhere for the kids to go, and this community doesn’t have that.” 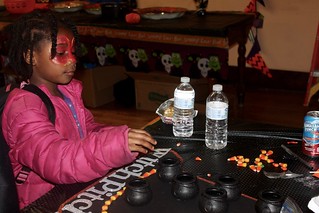 Treasure, 6, wins some candy by throwing pieces of candy corn into different cauldrons in the Witch Pitch game.

As kids walked in, they had their hand stamped and filled out raffle tickets for the multiple giveaways throughout the night. Richie said the raffles were made possible by donations from businesses and organizations in Syracuse, like Barnes & Noble, Sky Zone Trampoline Park, the Museum of Science and Technology and Billy Beez at Destiny USA. Billy Beez himself also made an appearance.

The different activities included face painting, miniature bowling, Halloween-themed Scattergories and darts. Many of the volunteers running the games were teenagers from the neighborhood who had participated in the event in the past. India Lewis, 18, did face painting and has been volunteering at the Spooktacular since she was 16.

Popular costumes were Elsa from Frozen, superheroes like Spiderman and Superman, and Halloween favorites like vampires, witches and animals. Richie got into the Halloween mood as Elsa. A photographer from Walgreens also came to take pictures in a spooky photo booth for free. 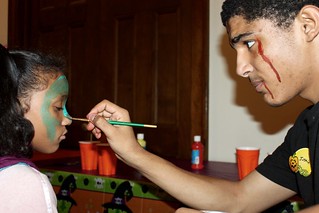 Justin, 13, transforms the face of 13-year-old Infinity into Frankenstein.

Kia Brown, a resident of the Eastwood neighborhood, was also a first-timer at the event and brought her 4-year-old niece. “I came to support the kids in this community,” Brown said. “It was a nice turnout, and I enjoyed it.” Brown added that she made it a point to bring her niece because her niece lives on the South Side.

For next year, Richie said she would push the start time back to 5 p.m., instead of 4:30 p.m., because the school day ends later, and would have more adult supervision in different areas. She would bring more candy too, since the supply ran out within the first hour and a half, for an event that lasted an hour longer than that. The children also enjoyed popcorn, apples, pretzels, chips and doughnut holes to make sure they wouldn’t risk running out of energy.

But besides the event’s unpredictable flaws, it met the Richie’s goal for the night, which was, “to offer the families and the kids of this community a safe and fun place to come celebrate Halloween.”