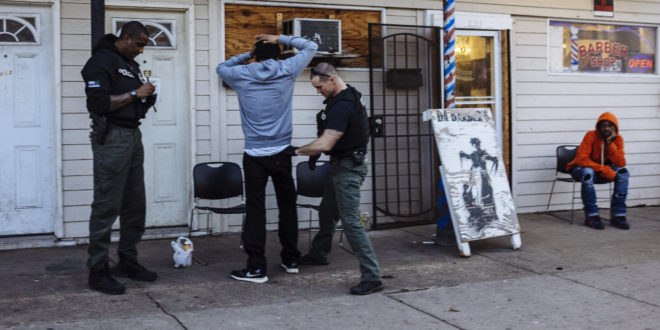 The familiar call goes out over the police radio: “Shots fired …”

Within seconds, two Syracuse police officers turn around from their patrol on the West Side of the city and speed to the crime-plagued south. They weave in and out of traffic as they race to the address.

By the time the pair arrives, there’s a handful of others already there — with more on the way. They’re not wearing the normal blue police uniform but rather military green pants, sweatshirts with bullet-proof vests, and winter hats. The search for a fleeing suspect begins.

The officers are part of the Syracuse Police Department’s elite Crime Reduction Team, a 12-man force that targets areas with high crime rates and heavy gang activity. They’re experienced officers who rack up drugs, guns and cash from criminals. 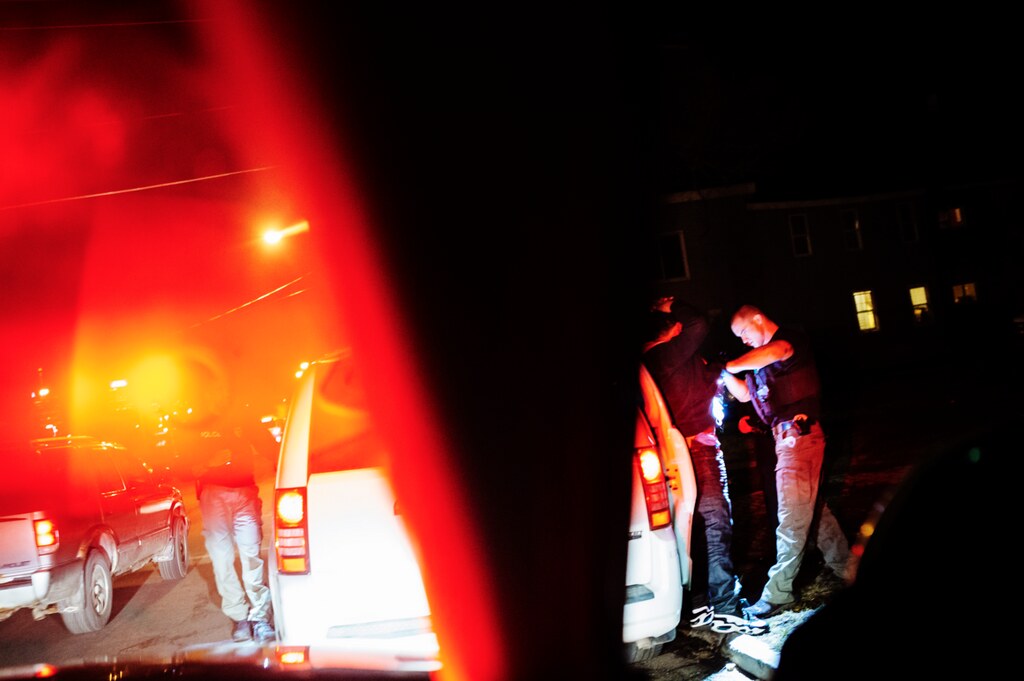 “You always have to be a little cautious on the job,” said CRT member Brendan Cope, the longest-tenured member of the team. “You don’t know what you’re coming across.” | Michael Santiago, They Wear Blue Photographer

“They’re the ones who are out there every day engaging the worst of the worst, the baddest of the bad, pushing them back off their heels, getting the guns off the street. They’re worth their weight in gold,” Syracuse Chief of Police Frank Fowler said.

Police cameras captured the recent call, near a corner store. The officers track the suspect through snow, and after conversations with neighbors identify the home — two doors down from a house with an “O.G.s Against Gun Violence” sign in the window — where the suspect’s hiding and now cornered.

Dressed in a Hawaiian shirt and no shoes, he’s led out of the house and stuffed into the back of a police car. The Crime Reduction Team, accompanied by a few regular patrol officers and a member of the New York State Police, begins the search for the weapon.

They find it tucked just inside a fence in the backyard of an abandoned home, and each member of the search gets a turn looking. One voices a clear message: “The CRT just f—ed you,” he declares.

Each team’s work starts with regular patrol — the cornerstone of their work. They drive through specific areas and look for clues during normal traffic stops, which make up about 90 percent of the duty. Members will write tickets and issue warnings the way they did in their earlier years on patrol, but that’s not the goal of these specially deployed officers, which is to turn routine stops in high-crime areas into arrests that catch criminals and seize drugs and weapons. 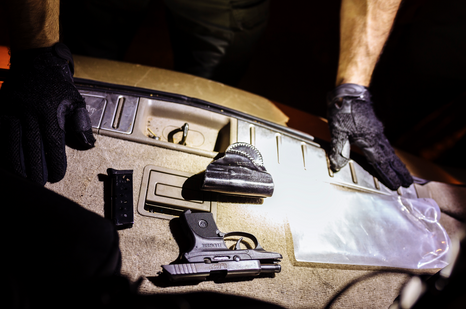 The Crime Reduction Team’s top priority is to confiscate illegal guns in hopes of reducing violent crimes that have been on the rise in Syracuse.  | Michael Santiago, They Wear Blue Photographer

Just before 5 p.m. on a Saturday in February, two CRT officers pulled over a car on South Avenue for windows that looked to be too tinted. They ran the driver’s license and found that he had a record.

“You always have to be a little cautious on the job,” said CRT member Brendan Cope, the longest-tenured member of the team. “You don’t know what you’re coming across.”

This time, though, there was no altercation and no major suspicion. The driver was let off with a warning. But the stops do yield arrests and seizures.

“Policing nowadays with limited resources, you have to add either a data-driven strategy or a focused-deterrence strategy or even a combination of the two,” Fowler said. “You can’t effectively do focused deterrence without having a unit like the Crime Reduction Team.”

In the team’s Erie Boulevard headquarters, the room is a wallpaper of pictures of guns seized over the years. There’s a running tally for each member and a stack of photos on a desk. They’ve run out of room on the wall.

They keep the photos as mementos.

— By Justin Mattingly, reporter with They Wear Blue project