The West Onondaga Green Corridor project, a plan to re-design West Onondaga Street to reduce storm water runoff and improve traffic flow, has some local business owners worried that they could lose access to the street from their building parking lots.

“The intent is to make this street a better place, where more people want to put their businesses and shop,” said Paul Mercurio, transportation planner for Syracuse’s Department of Public Works, at a mid-September public meeting held at the Southwest Community Center. “This project will hopefully make it better for people driving; it will be a much calmer and less stressful street to drive down because there won’t be people switching lanes all the time.” He also added that the project would “beautify the street.” 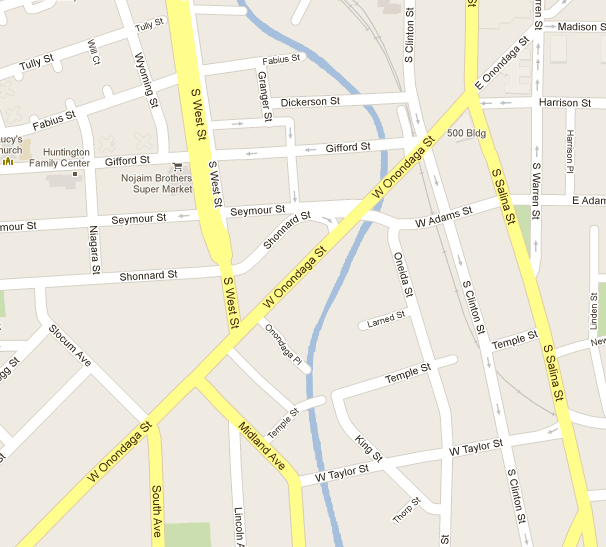 The project will affect West Onondaga Street from South Salina Street to South Avenue. The project will capture about 3 million gallons of storm water annually, said Zach Monge, an engineer at CH2m Hill, which is working with the Save the Rain program.

West Onondaga Street, which currently has four driving lanes — two in each direction —will be narrowed to three lanes; there will be one driving lane in each direction and a center turn lane. The road also will include a bike lane on both sides and a parking lane on one side of the street. The sidewalk and curbs will be extended another 4 or 5 feet to make it safer for pedestrians, Monge said. The new infrastructure will include a storm water catching system, which will help reduce pollution.

The Save the Rain program is a “comprehensive storm water management plan intended to reduce pollution to Onondaga Lake and its tributaries,” said B.J. Adigun, administrative director of green technology for Onondaga County Department of Water Environment Protection. “The county has been under court order for a little over 10 years now to reduce the amount of pollution that enters Onondaga Lake.”

The meeting was set to discuss different greening options on the West Onondaga Green Corridor project, including potted plants, grass and trees. The project is still in its early planning stages, Monge said. It is expected to be finished toward the end of 2013 or during 2014.

However, the meeting’s discussion wasn’t focused on the logistics of the green project, but rather on the loss of curb cuts on West Onondaga Street after the project is completed. A curb cut is a driveway or an entrance into a parking lot. A parking lot without a curb cut means no cars would be able to enter.

Although some building and business owners on the street received letters from the DPW recommending that their curb cuts be eliminated, Mercurio said that no final decisions have been made.

The letters caused a lot of anger and confusion, said Jamie-Lou McKinney, an attorney at 415 W. Onondaga St., who received a letter about the entrance to her parking lot, which can hold four to six cars. She was particularly frustrated with the wording of the letter, which she said stated that the parking lot is “dangerous” and “unnecessary.”

“I’ve gotten a letter that says I don’t get a curb cut,” McKinney said. “But I don’t see much parking getting added. That’s a problem. Sometimes, I work at my building until 3 a.m. Where am I going to park and who is going to escort me down there?”

McKinney said if the small parking lot adjacent to her law office is closed in and does not receive a curb cut, she may have to park on a metered street, which she estimated could cost her around $400 a month. Metered parking is a possibility, according to Mercurio.

McKinney explained her position. “I think the green project is great, and I am not opposed to it, but I am just really concerned about my parking lot.”

Mercurio said that the two of them could discuss it later and tried to move on to the green infrastructure project, but Tim Wentworth, owner of a building at 377 W. Onondaga St., spoke up.

“I’ve never heard anything so stupid in my life,” Wentworth said. “For the one or two cars that park there, it won’t affect the safety of the street. These are buildings that have been there for 55 or 65 years, and now the city is taking away their curb and parking. I think the city needs to figure out alternatives,” Wentworth said. “You are hurting our businesses.”

Mercurio said he wanted to make it clear that the letters sent out were still recommendations and that nothing was final. “I think we were a little overzealous in the language we used in the letter. I interpreted that at the beginning of the conversation. The way that letter makes it sound is like this is one hundred percent done and you don’t get a curb cut, and you still could,” Mercurio said.

Another example of a business losing a curb cut is Family Dollar on West Onondaga Street because the business has a second opening to its parking lot and does not need two, Mercurio said. His goal is to eliminate unnecessary driveways or curb cuts.

This design will help to improve traffic flow, Mercurio said. “We are reviewing the traffic patterns and doing an access management along the corridor to improve the flow of traffic and make the street safer,” he said.

The project is still in its early planning stages, but both Adigun and Monge are hopeful it will beautify the city and save rainwater.

“Right now, this street is all concrete, the typical urban street,” Adigun said. “With these improvements, we are going to be able to soften it a bit. It is going to just look a lot more appealing.”