When Bill Denham, 65, and Billy Ray McDonald, 70, opened up the B&B Cocktail Lounge on South Avenue nearly 23 years ago, they

had one thought in mind: make it more than just a place to grab a drink. They wanted neighbors and friends on the South Side and around it to have a place of comfort — a place where everybody knows your name and you know theirs, too. 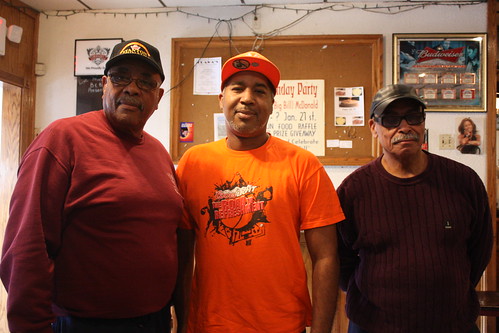 Pictured left to right: Billy Ray McDonald, 70, Charles Martin, 46, and Bill Denham, 65, stand together inside the B&B Cocktail Lounge. Co-owners and longtime friends, Denham and McDonald have become more than just a boss to employees like Martin who more appropriately call them “…my dads.” | Natalie Caceres, Staff Photo

There is something about Denham and McDonald that makes you want to grab a hot cider and pull up a chair. Their voices have a rhythmic bass so in unison it’s like listening to a harmonic melody. Their ability to finish each other’s sentences is emblematic of the brotherly relationship these two have developed over time.

They met while both worked at the Carrier Corporation in Syracuse more than 30 years ago. While looking at some real estate, they came up with the idea to open what is now known as a landmark around the South Side: The B&B Cocktail Lounge.

“We saw that the place was for sale and knew it was the one,” Denham said about the lounge located on the corner of South Avenue and Tallman Street.

They bought the space for about $52,000 back in October 1989 and were open for business almost a month later. However, the purpose of their purchase was not to simply provide a place where people could grab an after-work drink. Instead, and still true today, they want the lounge to be a place where young and old can come by and feel at home.

“Our focus is to bring people together, a place where they can meet, have good conversation and a sandwich,” Denham said.

Added McDonald, “I’d like people to know that this place is here for them and those in the community where they can relax and enjoy themselves and have a good time.”

When the idea initially arose from Denham about opening a bar, McDonald admits he was a little unsure about how to run such a business. But with Denham by his side, anything was possible. 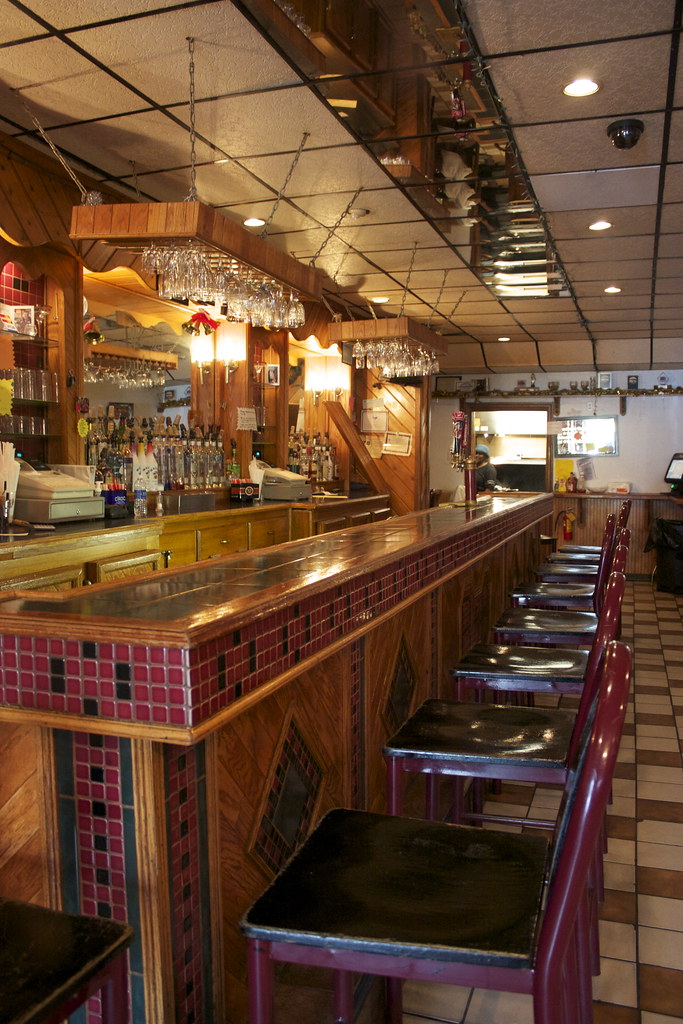 The B&B Cocktail Lounge, named appropriately after owners Bill Denham and Billy Ray McDonald, was opened more than 23 years ago after the friends decided that there needed to be a place where people could hang out in the South Side. | Natalie Caceres, Staff Photo

“The name B&B comes from Bill and Bill,” McDonald said. After 23 years of running a successful bar, McDonald says he’s proud to be an owner along-side his friend. And by the length of time some of their employees have worked too, it would seem B&B really is the place to be.

One is Charles Martin, 46, who has been working at the B&B since he was 26 years old. The bar, he says, is not only a home for him — it’s a place that has taught him how to be a better man. He says much is owed to Denham and McDonald.

“They’re two of the most wonderful guys to work for,” Martin said. “I’ve been here 20 years, and they put me on track. I can always look to them for advice.”

Martin, who is father to a young boy and girl, says that Denham and McDonald have helped to inspire not only him but also his children. Having lost a son who was murdered years ago, Martin is keen on using his mentors and the B&B as a model of how to live and encourage a successful and fulfilling life.

“They helped me through all my life. The good, the bad, the ugly,” Martin said. “These two guys right here? They’re like my dads.”

Denham and McDonald help spread this message of community embracement through several events they hold or sponsor each year, such as Customer Appreciation Day, election events and friendly get-togethers like birthdays.

Both are involved with volunteer work — at the Inner City Rotary Club, the Southwest Center Board, New York State Blues Festival Board, Syracuse Association of Retired Men, and the Syracuse Golf Association. So it’s no surprise that the B&B is treated with fondness by the community.

“We’re a family,” Denham said about their relationship with neighbors and friends.

A long-standing tradition at the bar is based on an idea that Martin brought to the table seven years ago: “Family Day at The B&B” — where anybody, not just South Side residents, can stop by the last Sunday of July for barbecue, games and fun in the parking lot next to the B&B.

“It started out for the kids and ended up being a community event,” Martin said.

Part of the day includes “Operation Safe ID” — a partnership with the Syracuse Police Department in which ID pictures can be taken of South Side youth. Their information would be immediately available, for example, should one of them be lost one day. 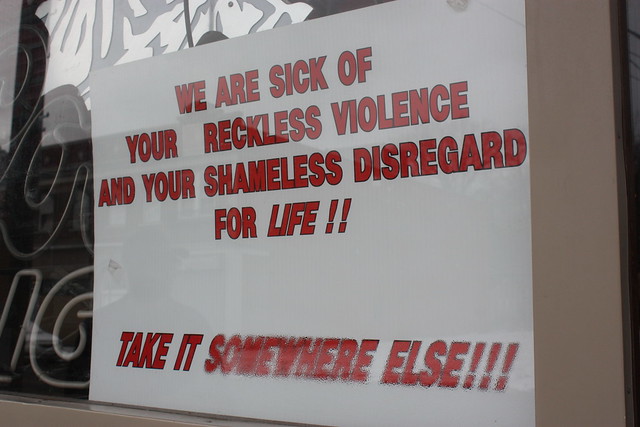 In the window of the B&B, a sign is visible that discourages the ongoing violence that occurs around the landmark bar. In recent months, much to the bar owners’ disapproval, the local media has associated the bar with the violence. | Natalie Caceres, Staff Photo

It’s yet another way that Denham, McDonald and Martin are passionate about the community.

“We want to show these kids a different way of living,” Martin said.

McDonald shares his outlook about helping the community youth. “The things I want to relate to them is that they have to stay focused on things that they want to do, things that they’re trying to do.” he said.
But the support doesn’t end with the youth. The three all come back to the fact that besides being a bar, the B&B is a place they want people to feel comfortable and relaxed.

“We want to continue to gain respect from the community” and vice versa, Denham said.

Martin puts it best when asked to describe the B&B. “It’s more than just a bar.” 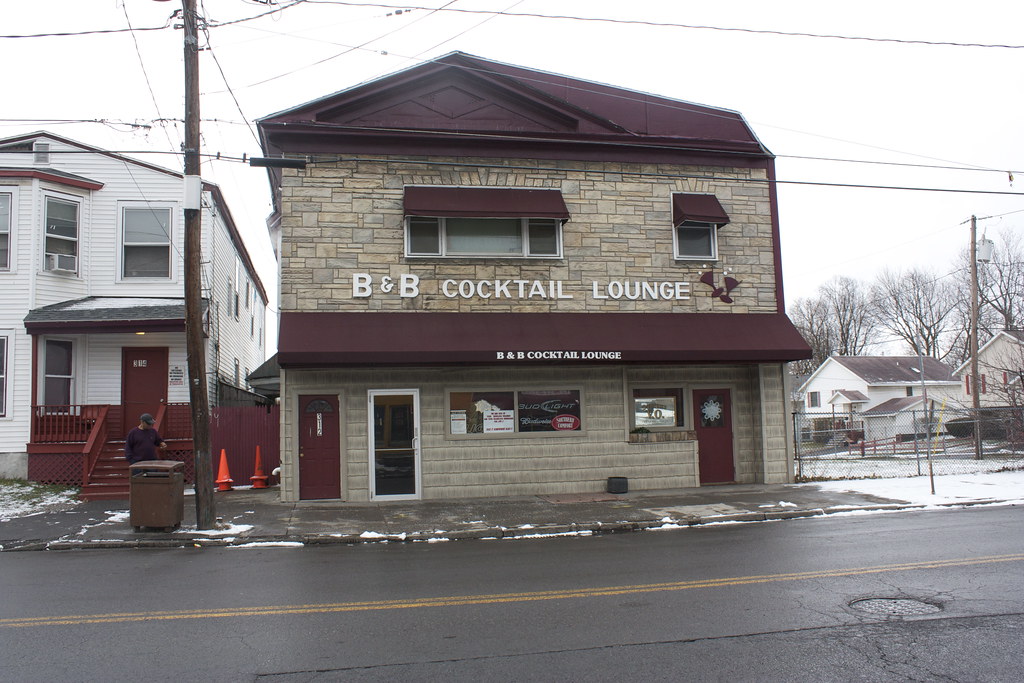