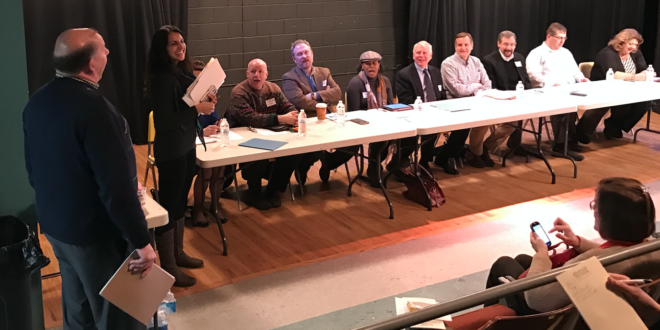 Leaders of nonprofits operating on Syracuse’s South Side are in a wait-and-see mode regarding the policies to be enacted by the new federal administration in Washington.

Ken Craig, Mike Melara, Sharon Owens and Loretta Zolkowski coincided in saying that a cut on the level of federal funding to these nonprofits could adversely impact the South Side. The positions of these top-ranking administrators are president of Housing Visions Unlimited, executive director of Catholic Charities of Onondaga County, chief executive officer of Syracuse Community Connections (SCC) and executive director of the Human Services Leadership Council of Central New York, respectively.

They spoke as part of a panel of nine nonprofit officers on Jan. 9 in the Jazz Central auditorium, located at 441 E. Washington St. The rest of the panel presenters included Heidi Holtz, from the Rosamond Gifford Charitable Foundation; Stephen Butler, from Central New York Arts, and; Kevin Montgomery from the Everson Museum. The event was convened by the Onondaga Citizens League (OCL), an organization with open membership that has been using the financial contributions of its members to produce an annual report since 1979.

The theme for OCL’s 2016-17 yearly study is “How Central New York Works: Examining the Diversity of Our Economic Base – Past, Present and Future.” The format of this study consists on bimonthly public sessions featuring a range of panelists. The sessions run for about six months and they meet at a different location each time to cover a distinct aspect of the overarching topic.

Holtz set the stage for the early January event by saying that nationally nonprofits account for 10 percent of employment and in New York State this percentage goes up to 18 percent. She added that, in Onondaga County, nonprofits have 41,000 employees.

“Of the five largest employers in our county, four are nonprofits. The other is Wegmans,” she said.

Melara told the audience that about 71 percent of Catholic Charities funding comes from contracts with the federal, state and local governments but that rarely the government pays 100 percent of each contract.

“The government usually requires a 25-cent matching for each dollar that it gives to us,” he added. “A way we use to comply with this requirement is to utilize a matching formula in which we calculate a rate for the hours that volunteers contribute to our organization.”

Then, he wondered aloud, “How do we succeed in bringing more private donors, especially when they want to fund only direct services, not administrative costs?”

“This kind of funding parameters prevents SCC from hiring more people, as this emphasis on direct services misses the point that each new employee needs overheard expenses such as infrastructure and information technology, plus fringe benefits, which we cannot afford otherwise,” Owens said.

Craig said that Housing Visions was funded in 1990 with the mission to revitalize neighborhoods by offering higher-quality and affordable housing.

Owens said SCC manages the Southwest Community Center, which is a city-owned building.

“Neighbors identify our center as one offering free clinics in the public health arena such as reproductive health, gun violence and HIV/AIDS prevention and counseling,” she added. “A problem of ours is the lack of diversity of our financial resources as 90 percent of what we get is public funding  — 75 percent from New York State. So we need to have more flexibility in this regard.”

“Our mission is to build the capacity of our grassroots members, which comprise between 70 and 80 percent of the human services nonprofits in the county, and have between 2,000 and 3,000 employees,” she said. “On this we are very dependent on the government. We need more public-private partnerships.”

Melissa Mennon, the OCL study co-chair, along with the Rev. Craig French, asked a question about the workforce in the nonprofits represented by the panelists.

Melara answered that the Catholic Charities has a “hierarchical structure like the military and Church.” He went on to say that his organization has 321 employees, 220 of whom are involved in direct service such as case management for its clients living in homeless shelters and refugees, plus 63 employees performing manager-type services such as supervision.

Owens said that SCC has 82 staff people with one quarter of them being under 40 years of age, but this segment is not at the executive or manager level.

“SCC takes pride in being the land of the second-chances for individuals who have come back to the community after committing missteps,” she said. “They are hired based on their life experience, work and commitment. The line between our introductory staff and our constituency is getting grey and blurry. I see this as a proving ground for this staff to move on to other working places.”

“The South Side has a wealth of brain power in our young people who had gone [away] to study and are returning to Syracuse, but here they are underpaid and underutilized. For example, I know a young man who got a master’s degree in Chicago, and he is earning just $25,000 a year.”

Butler added, “There is a brain drain. Young people wouldn’t stay because there is no opportunity for them here.”

Craig told the attendees that Housing Visions has an accounting team made up of seven people, who were hired from its training program and that, a sister organization, Visions for Change, has four people doing training to move people out of poverty.

Melara talked about Project Joseph, a Catholic Charities program by which it subcontracts the maintenance — such as repair, painting and lawn mowing — for the properties it owns to its clients as on-the-job training. The clients could subsequently go on to work for private-market customers.

Melara concluded, “The best way to reduce poverty is to provide people with work.”