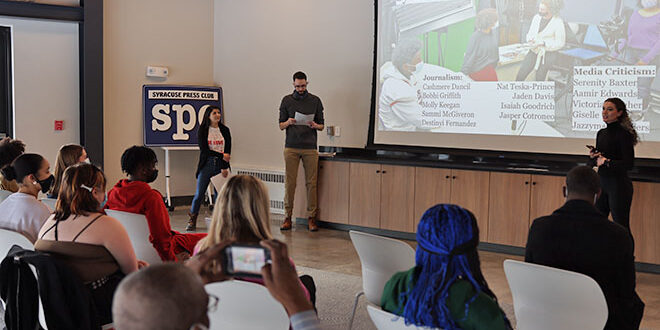 The Syracuse Journalism Lab launched in September 2021 to prepare young people for careers in media. The J-Lab’s first class graduated on Feb. 18 at the Salt City Market. | Image Provided by Katrina Tulloch

A new generation of aspiring journalists are taking part in the Syracuse Journalism Lab to help tackle the lack of diversity in Syracuse newsrooms.

“As a social club, we always felt a bit limited as to what we could do to address that,” said Patrick Lohmann, a Syracuse Press Club (SPC) board member during the lab’s creation. “Finally, we just decided to try and do something directly.”

With the help of grant money and the support of local newsrooms, including The Stand which serves as the program’s fiscal sponsor, SPC was able to pilot the lab at the Institute of Technology at Syracuse Central (ITC).

“The lab will help students become job-ready and college-ready,” Lohmann said. “We hope to give them very marketable skills, even if they don’t go into journalism.”

Participants in the journalism lab consists of 30 ITC 11th graders. Most are minorities with some identifying as transgender or gender nonbinary, reflecting the diversity that is part of the lab’s vision.

“The mission of the lab is to prepare students to work in the journalism industry,” said Jeffrey Newell, media communications teacher at ITC. “Students from the city who have the perspective of the city of Syracuse can have the voice and vision to tell an accurate depiction of what the city of Syracuse is.”

Camalot Todd, who was hired in September as the high school journalism educator with funding support from The John Ben Snow Foundation, remembers early in her career the newsroom she worked for was not receptive to diverse perspectives.

“A lot of gatekeeping in journalism is designed to silence perspectives that haven’t historically been allowed to be written,” Todd said. “It was really shocking to me to experience so much blatant forms of prejudice, hate and sexism.”

Todd, now a mental health reporter for Spectrum News 1 in Buffalo, travels more than two hours each Friday to instruct the journalism students.

“I love teaching journalism almost as much as I love doing journalism, partly because I’m so critical about how the industry operates sometimes,” Todd said. “I would like the next batch of journalists growing up to have a better understanding of the struggles and barriers I had to face so that they know how to navigate it with a little more grace.”

Todd met such struggles on her first day as a full-time reporter in 2017 when she had to cover the mass shooting at the Route 91 Harvest Music Festival in Las Vegas.

“It was a strange moment to be in, to start your first day at a job and call people who survived, asking if they could talk to me about what they witnessed,” Todd said. “It was definitely a very surreal moment.”

Todd wants young journalists to be more mindful of their mental health, as opposed to the silence surrounding the topic when she was coming up.

“We never really talked about how journalism is a trauma-facing industry,” Todd said. “It can be very hard to process and carry those stories with you because you can never put them down. It’s a weight that you always have to carry.”

Todd’s desire to cover mental health brought her from Las Vegas to Buffalo after her placement to Spectrum by Report for America. This national service program subsidizes the salary of a reporter in order to cover a gap in local coverage for the host newsroom.

While Todd was keeping up with the news in Upstate New York, she came across the Syracuse Journalism Lab teaching position. She applied at the end of this summer, went through the interview process and was selected to lead the lab.

“She related to a lot of my students,” Newell said. “She wasn’t shy about discussing how race is depicted in journalism and the difficult stories and the more depressing sides of journalism that need to be taught so the kids are prepared for the profession.”

Another component is to identify professionals to serve as mentors to be paired with participating students for further support. Mentors may also visit the class as guest lecturers. Due to COVID-19 restrictions at the school this year, guests have been scheduled virtually. The first presenter, Katrina Tulloch, a video journalist with Syracuse.com and president of SPC, gave a lesson on parts of a news story.

“One great question I was asked was, ‘how can we tell stories well about people who don’t look like us?'” said Tulloch, noting this segued into why the press club created the lab in the first place.

Presenting virtually had some limitations as Tulloch wished she could see students’ reactions better. She’s excited for the students to continue to meet with other professionals and get an inside look at different media operations throughout Syracuse.

ITC provides students with a studio where they have access to tools like DSLR cameras and teleprompters that help them explore different forms of media. Todd teaches them college-level material and is impressed with how her students are performing.

“There’s so much potential and so much talent that I don’t think they realize they have,” Todd said. “They’re so graceful with some of the topics we discuss.”