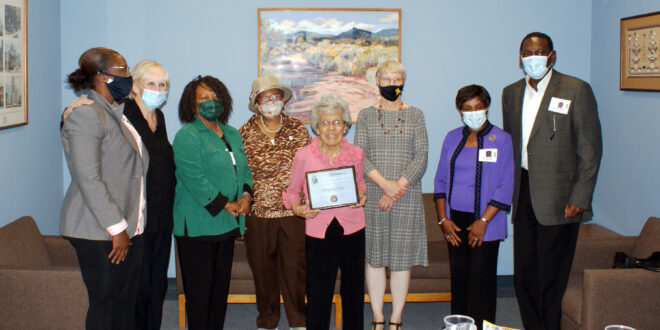 Marjorie Carter spent 40 years teaching students in the Syracuse area. Along the way, she blazed trails and inspired many. Now, she has been recognized for her decades of service in education.

Carter, 95, received a New York State Senate Woman of Distinction Award Wednesday for her work as the first African-American teacher in the Syracuse City School District.

“I was only doing what I wanted to do,” Carter said. “I must’ve done something right.”

Each New York state senator nominated one woman to receive the award. Carter was nominated by Sen. Rachel May, of the 53rd District.

“I give you just all the honor in the world for everything you have achieved and done, and the grace and joy clearly with which you have done it,” May said to Carter during the presentation. “It makes all the difference. That means people coming after you, look at you, and say, ‘this isn’t just an obligation, this is a pleasure and a joy.’”

All honorees typically receive their awards at a ceremony in Albany. However, due to the ongoing pandemic, the 2020 and 2021 award winners were acknowledged at smaller gatherings within their respective districts. Carter received her plaque at Sen. May’s office.

“You know, we should give folks their flowers while they’re alive,” said Lawrence Williams, CEO of Syracuse Community Connections. “Marjorie is a reminder that sometimes it’s more than a flower, it’s a botanical garden for the things she’s done.”

Carter was born in Syracuse and grew up on the East Side of the city. She always wanted to be a teacher but considered other plans at one point.

“I said to my father, maybe I’d want to be an artist,” Carter recalled. “He said you don’t want to do that, cause you’re not going to make a lot of money.”

Carter graduated from Central High School and went to college at SUNY Cortland, where she was often the only person of color on campus. She persevered through her challenges and graduated in 1950.

After receiving her teaching certificate, Carter taught first-grade at Charles Andrews Elementary School, which is now a housing complex. She later became an instructional specialist and helped set curriculum for the school district.

After Carter retired from the school system, she continued to serve as an educator for 25 more years as a docent at the Everson Museum of Art. She also volunteered for the Syracuse Federation of Women’s Clubs and the Salvation Army Women’s Auxiliary.

“Marjorie has been such a wonderful, loving influence for all of us,” said Linda R. Ervin, county legislator. “She doesn’t make you feel bad about what you’re not doing; she just lets you know that maybe you should do it the right way.”

Carter’s accomplishments are vast. She was the first and only African-American president of the Syracuse Teachers Association. She won the Pioneer Award for the Black Leadership Congress of Syracuse, was named a great leader by the Onondaga Women’s Political Caucus and received a distinguished alumni award from SUNY Cortland.

Carter’s dedication over the years laid the groundwork for future instructors. Now, there are more than 100 educators of color in SCSD.

“They say that an educator never really knows the impact that he or she has,” said Joyce Suslovic, retried SCSD teacher. “Marjorie’s influence is beyond national level.”

While Carter did not have any children of her own, she viewed her many students as her kids.

Carter still loves to hear about the accomplishments of her students years later.

“One of them has been an ophthalmologist for 35 years,” Carter said. “I got another message a couple weeks ago from a student of mine who just retired from the University of Alabama as a full professor, and then I have a few other local ones I hear from.”

Carter appreciates that her former students still remember her teachings and reach out to her.

“It’s indicative that they remember,” Carter said. “It was a success, their lives are a success, and I started it.”