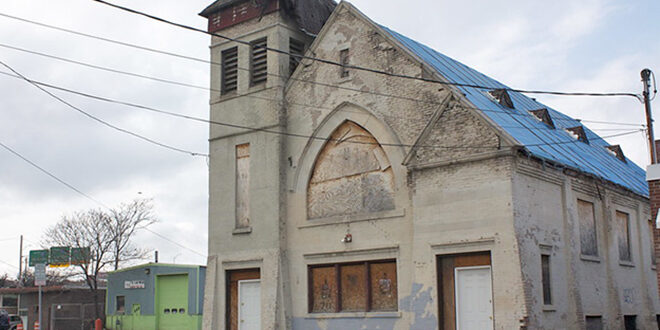 The People’s African Methodist Episcopal (A.M.E.) Zion Church was awarded a grant by the National Trust for Historic Preservation on July 15. | File Photo

The National Trust for Historic Preservation awarded a $3 million grant to help preserve Black history, with a portion — $75,000 — going toward a long-awaited plan to revitalize a Syracuse church building on East Fayette Street. The People’s African Methodist Episcopal (A.M.E.) Zion Church will use the funds to update the long vacant property into a cafe.

In the 1970s, the church’s congregation became too big for the building. So in 1974, Donald Holiness, the newly appointed reverend, moved the church to 2306 S. Salina St., where it is still located today. The East Fayette Street building remained church property.

No one attempted to sell the former church property until three months after Pastor Daren C. Jaime took charge in 2006. With the building deteriorating, the congregation was set on getting rid of the building.

But Sam Roberts, community and former assembly member, told Jaime not to sell, noting that this was a historical building. He felt it needed to be protected and rehabilitated.

“Letting this building become something else, really spoke to the hearts and minds of a lot of people in the community,” Jaime said.

For the last 15 years, Jaime and the People’s Development Corporation looked for the necessary repurpose funding by way of fundraising and grant applications — and they finally found it.

Beth Crawford, the project manager and designer for the renovation project (Crawford & Stearns) said there are two phases to the project. The goal for phase one is to protect the building: This involves roofing, masonry and glass restoration.

After the preservation of the building is over, then comes phase two: Building the cafe.

Jaime said that the plan is to create a small cafe, called Benediction Cafe, which will train  those in the community in need in the culinary arts. The pastor added that the Zion Church holds partnerships with different organizations and restaurants in the area for job placements afterwards.

The project to rebuild was announced in 2014, but renovations and the building of Benediction Cafe are just now finally starting.

Kerry Kennedy, project manager at People’s Development Corporation who is also thrilled about the project, said that it takes a lot of funding for the church to be rebuilt. Funding is the only hurdle that could slow down the project. Both Crawford and Kennedy are expecting more money in the coming year.

“There is another round of grants for African-American historic sites that will be coming up, I think at the end of this year,” Crawford said.

Crawford estimates two years before the opening of the cafe, set for 2023.

“We’re excited for it to happen,” Jaime said. “We’re excited, the community is now getting their wish of seeing this building become what it should be. And we’re looking forward to what the future holds.”