A chill hung in the air as a light rain fell on the South Side one recent Saturday morning. With his back to a white tent and several crates of fruit, Howie Hawkins fretted that the damp weather would scare off potential customers of Store for a Day.

“There are a lot of factors playing into what we’re doing,” said Hawkins, a board member of the now-shuttered Eat 2 Live Food Co-op on the South Side. “I would like to think the weather won’t do any harm, but I’m really not sure at this point.”

Hawkins and others organized Store for a Day to bring fresh produce to Syracuse’s South Side in the absence of Eat 2 Live, which opened last October at 2323 S. Salina St. and closed at the end of the year. Since it began, Eat 2 Live was fraught with funding issues, managerial problems and tight grant deadlines. The re-opening date has been pushed several times, and a new date has not been set. 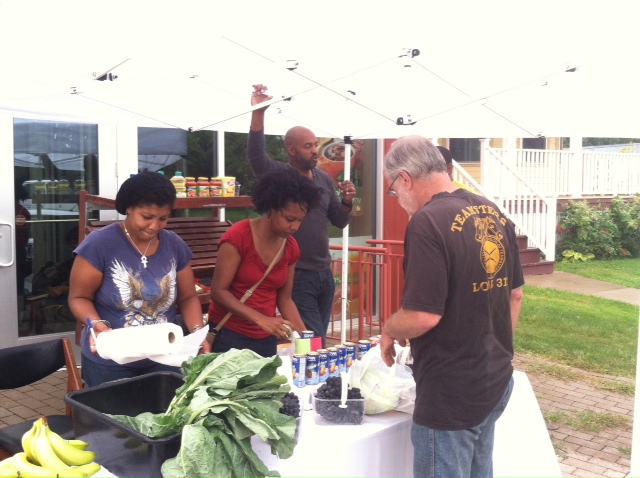 Howie Hawkins, Eat 2 Live board member, oversees Store for a Day on a recent Saturday morning. He hopes to be able to keep the temporary market open into the colder months. | Mike Mahardy, Staff Photo

Store for a Day sales take place on the sidewalk outside of the locked co-op doors on the first two Saturdays of each month. Products include produce such as bananas, lettuce and Concord grapes, along with a variety of beverages.

Several organizations also aim to bring food to the South Side. A farm in Homer, N.Y., for example, is shipping produce to the Southwest Community Center. Another food co-op, on Syracuse’s East Side, is considering a move downtown.

Store for a Day has been running since June, and Hawkins hopes it will extend into the fall.

“We know we’re going to continue through September,” he said. “October is a maybe right now, and as for after that, we have a lot of logistics to figure out. The colder weather, combined with attempts to open the co-op again, are making us have to be flexible.”

No date has been set for the co-op’s reopening, Hawkins said. The board made the mistake of announcing a date before, Hawkins said, and they don’t want to do that again.

Main Street Farms in Homer has organized a system for customers to pick up pre-ordered produce crates. In Syracuse, residents can pick up their crates at the Southwest Community Center. Customers who order at least five crates at once can have them delivered right to their doors.

“These crates change every time, so residents are not only getting healthy, fresh food, but they’re also getting variety,” said Allan Gandelman, owner of Main Street Farms.

The farm currently supplies food to 18 families. The community-supported agriculture season began in June and runs until November. Gandelman hopes more South Side residents will take advantage of the $9 crates every other week. These packages come with a variety of different foods, such as turnips and beets.

“A lot of the foods we provide are vegetables that people don’t always use,” Gandelman said. “For that reason, we’re hosting cooking classes at the Southwest Community Center when the customers come to pick up their food.

“This way, we not only provide them with food, we also show them how to make the best of it.”

Syracuse Real Food Co-op, resting quietly at 618 Kensington Road, in the Syracuse University neighborhood, is staffed by people with similar intentions as Gandelman.

Reina Apraez, produce lead at the East Side co-op, said she has been a supporter of local agriculture since attending William J. Nottingham High School.

The co-op is in the planning stages of moving to downtown Syracuse, something that comes with challenges, Apraez said.

“We’re not a huge store, like Tops or Wegmans,” she said. “So we have to pay more for produce. I think that the organic sections in Tops and Wegmans are pathetic, honestly, but people still go there. And to top it all off, we have to deal with zoning issues in the city if we want to move.”

Employees said the move not only would expand the co-op’s market, but also would provide a place for lower-income families to buy food.

Most of Syracuse Real Food’s customers come from a one-mile radius around the store, which includes families in the SU neighborhood, around Westcott Street and farther up Meadowbrook Road.

“We have much more competition these days, and now more people have started coming into the store,” Apraez said. This competition is good for us, and good for Syracuse in general. We’re eating local foods. And we’re sharing them, too.”