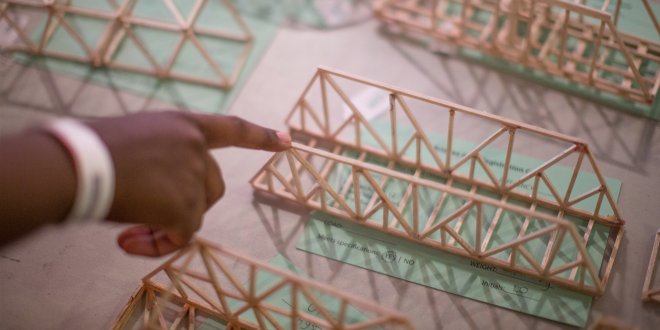 After feeling like she didn’t belong, Laurie Muok created her own robotics team 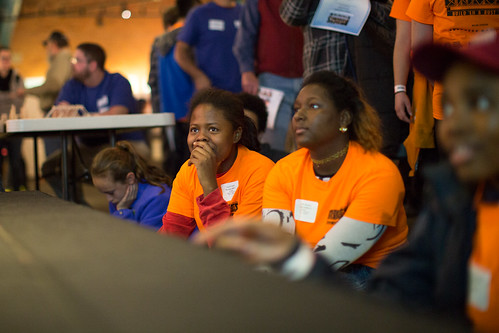 One of Syracuse’s few unaffiliated robotics teams got its start because the founder, Laurie Muok, felt like she was being treated unfairly on her school’s robotics team.

When Muok, now a senior at the Syracuse Academy of Science, didn’t go to a scrimmage in Buffalo in October 2014 that the rest of her teammates attended, she said she felt that was the final straw. As the only girl on the team, Muok suspected that it was because of her gender that her teammates minimized her role.

“It felt like I didn’t belong and I was the outsider,” she said. “Different things made it seem like I wasn’t part of the team and I was just someone they had to include because of Title IX laws.” 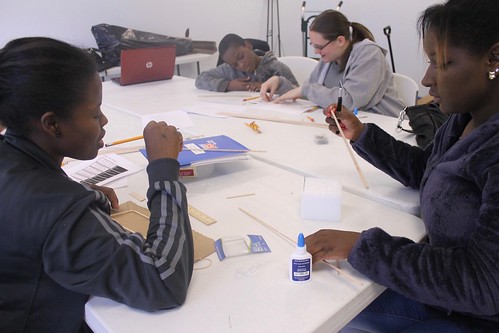 The Down Unders team members work to to build a truss bridge for the competition at the MOST. | Photo by Ashley McBride

The team coach at Syracuse Academy of Science, Omer Zengin, said this past November in an interview that he was not aware Muok felt that way, and he was surprised. He said he offers field trip opportunities to everyone on the team. “Maybe she missed one of our meetings and didn’t hear about it,” he said. “When Laurie was here, I put her in leadership positions.”

During her two years on her school’s team, Muok said that her teammates did not value her contributions, and that whenever she was given a task, she wasn’t allowed to be creative or experiment; she had to do it exactly how they told her.

So this past summer, she decided to start a new team and call it “The Down Unders.”

According to Muok, in the robotics field there are three categories of teams: school-based, organization-based and basement-based teams. Basement-based teams are not sponsored by or connected with any institution, which means that often the teams are started by people who don’t know much about robotics and are starting from the ground up. With the team name, Muok wanted to call attention to the fact that her team is starting from down under.

One of the benefits of having a basement team is that members come from a range of ages, backgrounds and experiences in the fields of science, technology, engineering and mathematics or STEM.

Khaziah Reese, also a senior at the Syracuse Academy of Science, joined the team to support Muok, even though she had not been on a robotics team. But she did echo Muok’s sentiments about being treated fairly. 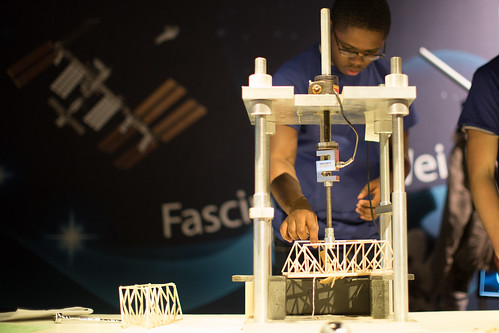 A volunteer from the Milton J. Rubenstein Museum of Science & Technology positions one of The Down Unders’ bridges to measure how many kilograms can be applied to it before it collapses. | Photo by Yu Hua

“This program is where I can actually do something as a team and be recognized,” she said. “I hope to bring individuality to the team and be a helping hand.”

Reese comes with a background in science, and her most recent science fair project was building a solar-powered car.

Other members on the team are new to STEM, and they range in age from 7 to 17 years old.

Muok’s mom, Gwen Muok, provides support and guidance to the team. She knew about her daughter’s negative experiences on her school team before she quit. Gwen Muok said she initially had advised her daughter to “stick it out” for her last year of high school, but patience ran out.

“You can only take so much, and if they didn’t want her to be a part of the team then fine, it was time to move on and do something else,” Gwen Muok said. “I did warn her that it would be a lot of hard work (to start a new team) and it was like starting a business, but if that’s what she wanted to do, I would support her.”

Over the summer, Gwen Muok said, her daughter sent out more than 400 copies of a press release about the team to Central New York news outlets and STEM organizations. One downside to having a basement team is that it doesn’t have a central source of funding, so Muok and her teammates have been applying for grants and sponsorships. They also are selling candy and have started an online crowdfunding effort at GoFundMe.

Although the team is still small, with about six members, The Down Unders had its first test in a bridge-building competition at the Milton J. Rubenstein Museum of Science & Technology on Nov. 14. The team 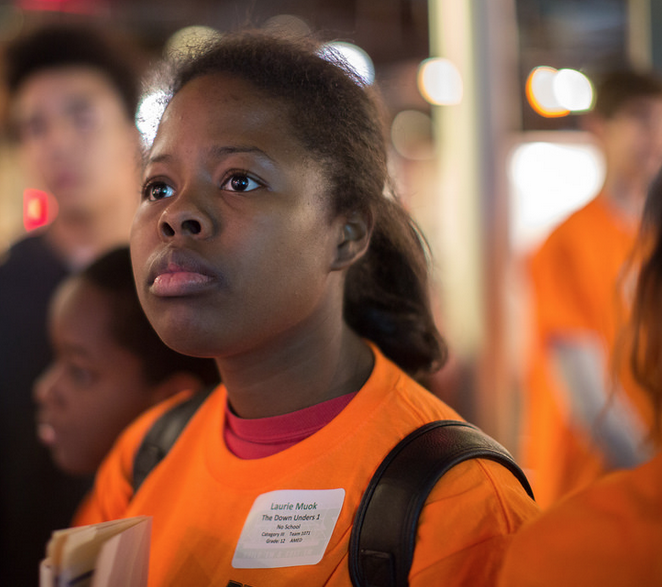 Laurie Muok has been interested in robotics for the last five years. | Photo by Yu Hua

submitted two bridges, each built by three members of the team. The judges determined the winners based on how much weight the bridge could hold before collapsing. The Down Unders’ strongest bridge held 13.55 kilograms — nearly 30 pounds — before it broke. Although that wasn’t good enough to place, the team members accepted the loss as an experience from which they could learn better building techniques for the future.

Justin Armstrong, 17, another member who has never been on a robotics team, enjoyed the experience.

“I’ve been to competitions before but none like this,” he said. “There were a lot more people that participated than I expected and it was overall a really great experience. I’m here mostly just to have fun, but what really counts is that I’m learning something for myself, rather than trying to win.”

Besides attending competitions, Muok wants the team members to gain more STEM knowledge and learn the value of working together. The Down Unders and their coach, Lockheed Martin systems engineer Sarah White, are planning field trips to engineering institutions to expose the team members to real-world applications.

“I want people to learn teamwork, leadership and just general acceptance,” Muok said. “It doesn’t matter who you are, you can still be part of something.”