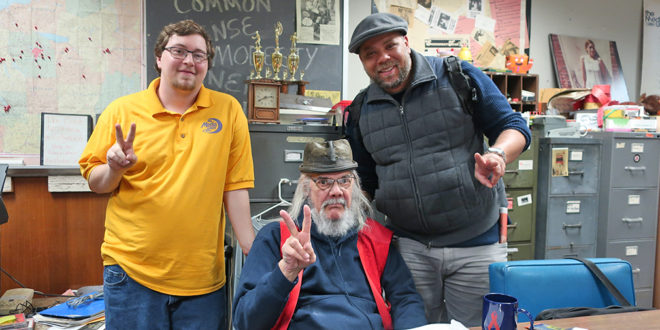 After 22 years located on Montgomery Street and 43 years in existence, The Media Unit will close its doors and watch its executive producer Walt Shepperd retire.

The well-known teen production and performance troupe that has tackled issues of racism, drug use and even school shootings will cease to run its summer production tours, but will continue to produce its weekly TV show “Rough Times Live,” which airs 8 p.m. Tuesdays on Time Warner channel 98.

“This is not the end, but a new beginning,” said Shepperd, who will stay on as a consultant for the group.

On Saturday, March 30, an open house and sale will be held where everything from memorabilia to furniture to production equipment must go. Visitors are invited from noon to 4 p.m. to make an offer on items that remain at the studio, located at 327 Montgomery St. Shepperd predicts the day will turn into a party and is planning to see many familiar faces from years past.

Over his 40 plus year tenure, The Media Unit has seen its vast alumni network expand. Notable alums still based in Syracuse include Andrew Maxwell, Derrick Dorsey, Lawrence Williams, Joe Driscoll and Tamar Smithers. 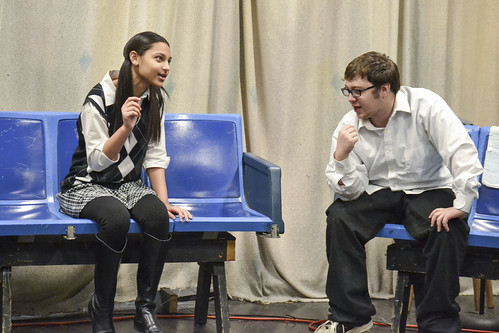 In 2016, members Shannon Williams and Elijah Sheridan rehearse a key argument from the troupe’s original musical “From the Back of the Bus” about about teens, racism and racial healing. | File Photo

For second-generation alum and current volunteer Tehran Hopkins the troupe offered much more than a chance to try out acting. For many, like himself, participating grew his confidence and technical skills.

“This unit is made up of a lot of discipline. It is run like a business,” Hopkins said. “We learned script-writing, marketing, how to run the camera, do sound and edit. I learned skills that I carried into my life today.”

Hopkins and Media Unit Cast Captain Elijah Sheridan along with the group’s board and alumni will see that the program carries on.

“It will be a family effort,” said Sheridan, who views the network of alum as an extended family. “While we’ll be starting over, we will carry on Walt’s mission. And everyone will pitch in.”

“Rough Times Live” will temporarily utilize the Onondaga Historical Association’s auditorium for a few hours each Saturday to film.

“They’ve been our neighbors for a long time and a big part of the neighborhood association,” said OHA Executive Director Gregg Tripoli. “So we didn’t hesitate to offer help.”

“The Media Unit has never been about me,” Shepperd stressed. “It’s about the youth.”

He said he always tells his trope he’s simply there to watch and be proud. And he will continue to watch as the unit’s new volunteers move the troupe into the modern age.

Hopkins plans to see the show posted online and hopes to reach local teens through social media. Interested teens ages 13 to 17 who like to act, sing and dance, as well as teens interested in operating a camera and working the sound or lighting should reach out to the unit’s new volunteers over Facebook to learn how to get involved.

Pick up April’s print issue Saturday, April 6,
to read a feature on Walt Shepperd, with several alumni
sharing their memories