As the Saxman and I stood in front of the Suds Factory on Clinton Street in Armory Square, we could see an apparatus for a festival being erected up the street in Clinton Square. The Saxman 51, moved to Syracuse from Trenton, NJ about 20 years ago. He has seen many of these types of festivals come and go over the years.

On many days long into the evening hours he can be easily found somewhere in the vicinity of a crowd but never really part of it. If you’ve frequented Armory Square, Marshall Street, Price Chopper at Western Lights or the Inner-Harbor, chances are you’ve seen him. He’s usually backed up against an old stone wall or a pole playing for tips and selling his CD titled “Ministry of Music.” (Click the orange play button below to hear a song from his CD titled “Land of Kemet.”)

Land of Kemet by TheStand

The Saxman engages many people on a daily basis but most of them refer to him only by his metonym “The Saxman.” He also plays regularly at the Living Savior Church where the Rev. Jessie Brantley is pastor. Living Savior is located on West Newell Street on the South Side of the City of Syracuse.

The Saxman is a very approachable guy. He is always eager to oblige a song request, share a poem or engage in a short conversation. A couple of his favorite topics for dialogue are the contributions to modern music of the Be-Bop Era Greats i.e. Miles Davis, Dexter Gordon or Lester Young, and of course, the Bible. 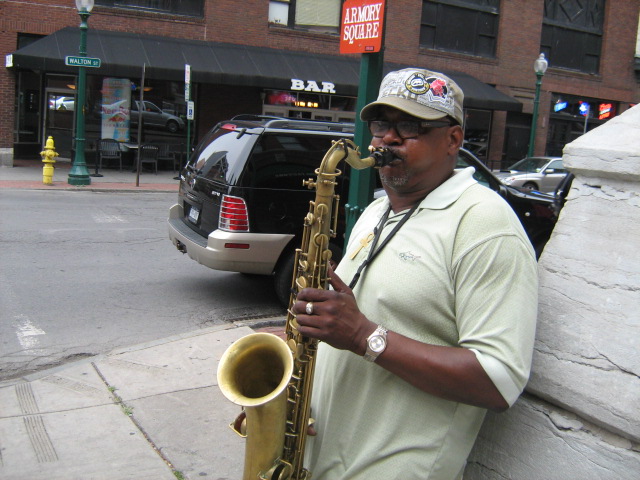 The Saxman has been playing off and on now for nearly 30 years but has not always made his living as a busker. He’s had a few careers in his lifetime including at one time being a New Jersey State Corrections Officer. He has also been an over the road tractor trailer driver and a construction worker. Currently, he is dealing with Glaucoma. It has caused him to completely lose sight in one of his eyes and the other one is beginning to slowly dim. These circumstances prohibit him from fully performing the duties of those other vocations. Although he is slowly losing his sight, he still maintains his insight.

I asked him to comment on how being a street musician fits into the local music scene, and he shared the following: “Outside of dealing with the elements — the cold, the wind and the rain — it’s cool. Being a ‘street player’ gives me the opportunity to express myself freely. I can play what I want to play without having to conform to any specific structure, and if I make a mistake, I can turn that mistake into something positive. It has also given me the opportunity to meet some really interesting people. For instance, right here in Syracuse I met the drummer Mike Clark. Clark is famous for playing with Herbie Hancock. I also met Joe Riposo; Joe is a local saxophonist who is the Director of Jazz Studies at Syracuse University. He is also the author of a book that inspires me, ‘Jazz Improvisation: The Whole-Brain Approach.’ Joe encourages me whenever he sees me.”

As for fitting into the local music scene, he shared with me his feelings of being overlooked when it comes to bookings. He believes that due to the sheer number of events that are held annually in the City of Syracuse like the festivals and concert series, that he should have opportunities to perform at them. After all he’s spent many hours learning and perfecting all the anthems and other traditional repertoire of the craft. And working through the elements in Syracuse has to be a testament to his ability to be adaptable in all situations.

Through all this, however, the phone just doesn’t seem to ring, so he creates the opportunities for himself. As the days start to get shorter and another festival season begins to come to an end, The Saxman wants people to know his name is Charles Robinson. He is a musician, and he is available for parties, weddings and ceremonial and sporting events. He may be reached via phone at (315) 383-7942 or (315) 751-8401.

As the Saxman thanked me for this interview and as we headed our separate ways, I begun to think about something. I thought that maybe if the people started to recognize him as Charles Robinson rather than as “The Saxman” those phone calls might start to happen. Hmmn. Then I sensed something else being a street player is not just what he does because of the circumstances but rather what he is despite of the circumstances. He’s The Saxman. The reason for the lack of phone calls is even deeper.

— A Friendly Five is created and coordinated by Reggie Seigler to highlight the music and history of Syracuse’s South Side music scene. If you are a local musician and have an idea for a future column, contact Reggie at reggie@softspokenband.com or call (315) 479-9620