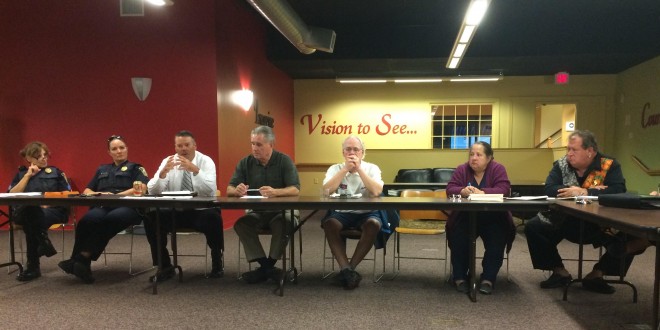 The South Side Tomorrow’s Neighborhoods Today planning council attracted double its normal turnout for its meeting Monday, Oct. 6. About 20 residents and business owners came to the South Side Innovation Center to speak with Director of Code Enforcement Ken Towsley and Sgt. Therese Lore of the Syracuse Police Department.

Towsley, whose office handles building inspections and housing and property code compliance, spoke about issues regarding code enforcement and Lore addressed community policing concerns such as noise complaints and abandoned cars. Meeting facilitator John Sexton, who has regularly attended meetings for the past three years, said there are usually only about nine to 10 people at each monthly meeting.

“I think a lot of people are concerned about the code enforcement issues,” Sexton said, adding that he was “pleased” with the turnout of “more people and newer people.”

Much of the meeting focused around properties that residents determined to be blights of the South Side.

Emma Johnston, a South Side resident, pointed out that on Ballard Avenue there are five houses in a row that are boarded up and are “eye sores” that aren’t being taken care of.

“How can they let these houses go like that?” Johnston asked. “They’re rotten houses, just rotten. … It isn’t any good.”

But Towsley said the city is backed up with a list of 2,068 vacant residential properties. Since July 1, his office has demolished 13 houses, he said. At a cost of $22,000 to $25,000 per home demolition, he said code enforcement will run through its budget by the end of the year.

He will be going in front of the Syracuse Common Council to ask for more money near the end of the year, he added.

Each week Towsley visits the Elmwood neighborhood in the South Side because it has many problems, he said, but unless properties are considered emergencies there isn’t much he can do, though he added, “it’d be great to take them all down.”

“I think the mayor herself should take a trip down on the South Side and take a look at these places,” Johnston said.

Councilor Bob Dougherty said the Greater Syracuse Land Bank is the solution to the concerns, but that it isn’t currently taking any new properties and hasn’t in about three or four months because “other people on the council are holding up the land bank.”

“I’m not getting any and I want to get a lot,” he said of the land bank obtaining houses.

Residents, Towsley and Dougherty went back and forth discussing issues for over 40 minutes until Julius Lawrence Jr., one of the South Side TNT’s facilitators, urged the group to move on to other agenda items.

Lore, who works in community policing, said her office gets many calls about noise violations on the 300 block of Hillview Avenue, but said it is “certainly not a priority in the city” when there are shots fired and other calls that officers need to be dispatched to.

Capt. Lynette Delfavero of the Syracuse Police Department said 911 calls are put into three categories: priority one is anything in progress such as shots fired or a burglary; priority two is when there is suspect information; and priority three is everything else such as noise complaints.

“A lot of the tax payers have to wait for police service because we’re running from gang shooting to gang shooting,” she said. “To me that’s not right, but somebody’s life is going to take priority.”

Another item addressed was confusion over dates of trash, recycling, hazardous waste and yard waste pickup. Dougherty said he will talk to someone in the mayor’s office about distributing pamphlets via community organizations to keep residents informed.

Sexton said he will invite Katelyn Wright, the executive director of the Greater Syracuse Land Back, to the next meeting, which is schedule for 6 p.m. Monday, Nov. 6, at the South Side Innovation Center, located at 2610 S. Salina St.

He added that the TNT board of directors selected a coordinator, which is a part-time paid position. The coordinator will earn around $24,000 a year when hired, which will be handled through an employee leasing service.

“This was a great turnout here for a South Side TNT meeting,” Dougherty said. “It’s phenomenal. Everybody has to keep coming every month.”