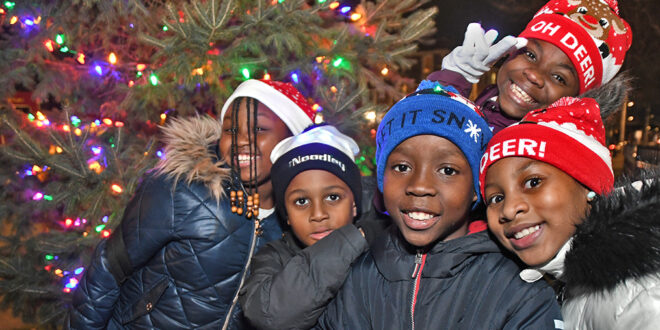 Children pose in front of the newly lit tree during the 2021 Sankofa Christmas Tree Lighting held outside of Beauchamp Branch Library on Dec. 3. | Mike Greenlar, The Stand

“I like doing it, and the people in the community like to come out,” said Latoya Allen, Syracuse’s 4th District councilor. “It’s fun. It’s something to do, and it’s a way to kick off the Christmas season here on the South Side.”

Allen began organizing this event after she took office. For Allen, who has resided in the South Side most of her life, the Christmas tree was a needed visual for this side of town.

“It’s something that I like to do for my constituents,” Allen said. “It just feels good to drive up and down Salina Street and actually see the Christmas tree.”

Last year, no in-person gathering was held due to COVID-19, but a video was made and shared that highlighted the tree lighting. The current tree in front of the library is on the smaller side, but it is a part of Allen’s long-term plan.

“The idea of not asking for a bigger tree was the idea that the community will grow with the tree,” Allen said. “Eventually, we’ll be able to do this five, 10 years from now, and the tree will be bigger.”

Before the lighting, children from the Jones World Adona Praise Mime Team performed two praise dances in Beauchamp’s auditorium. Capacity in the library was set at 50 attendees, due to COVID-19 safety precautions. The team moved outside for its third dance to entertain a larger crowd.

Tywonda Jones, the children’s dance coach, created the team as a nonprofit after her daughter passed away in 2016.

“What better way to get myself over my grieving and depression than starting a dance team — something she loved — and give back to the community and God,” Jones said.

The team performs throughout the Syracuse area at no cost, although they do receive donations. Jones views her team as a way to give back to the kids.

“It’s a beautiful thing,” Jones said. “Any opportunity that I have to get them out to dance anywhere, I do that, so I know that they’re somewhere not getting in trouble or doing anything wrong.”

After the performances, the Christmas lights were turned on following a countdown. Several firefighters from the Syracuse Fire Department showed up to view the tree lighting and lend their support.

Even Santa Claus made a special appearance to ask the kids if they were being good and what gifts they wanted for Christmas. He also spoke to the children about the meaning of Christmas being about family and love, not necessarily toys and gifts.

Tonda Jones, who is the travel mom for the dancers, finds great meaning in having the Christmas tree at the corner of Salina and Colvin.

“It’s heartwarming, because we didn’t have that on the South Side,” Jones said. “We’re trying to get everybody in the community to come see that not everything’s bad about the South Side.”

Tonda Jones’ 11-year-old son Nazier Sullivan was one of the praise dancers. Sullivan, who hopes to get a PlayStation 5 for Christmas, enjoyed dancing and seeing the Christmas tree light up.

“It was good,” Sullivan said. “I like Christmas trees. I don’t know why … I just love them.”