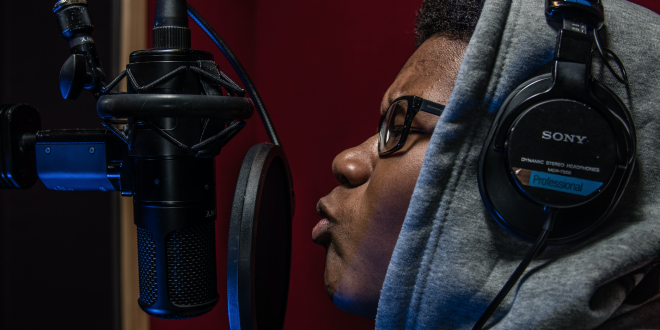 His whole life, Makhai Bailey had dreamed of one day recording music in the studio with his father, who has worked with popular hip-hop artists such as Rick Ross and Juvenile.

But for a while, such a goal was unattainable. His father, Freedom-Allah:Bey, had grown up on the South and East sides of Syracuse, but for most of Bailey’s childhood lived in New Orleans near his record label.

Eventually, thanks to some persuasion from Bailey’s godfather, Bailey’s dad left New Orleans and moved back to Syracuse in 2012, opening the Freeborn Music Productions label.

The move allowed Bailey, 16, to go from only speaking daily with his father on the phone to seeing him daily and living in the same house. And the teen made music even more of a priority in his free time from school and extra-curricular activities, allowing him to finally record with his father.

“I mean, I was nervous because it was my first time being in the studio,” Bailey said. “But the fact that my father was there to coach me, was an awesome feeling.” 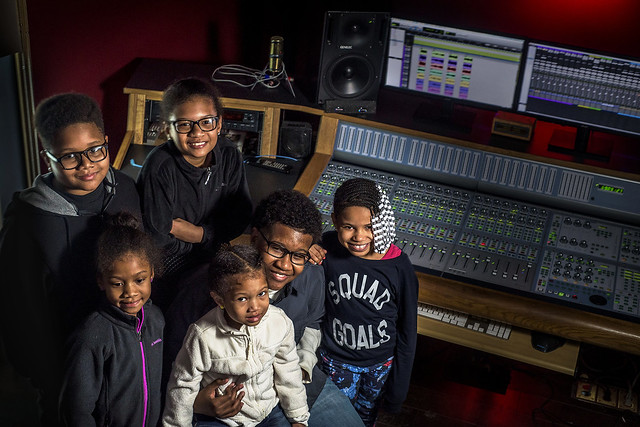 Bailey’s father, 42, views his son also as a friend and his right hand. He says he would often show his son emails he received from his mentor about human rights and other serious issues in the community.

Bailey’s godfather and Freedom-Allah:Bey’s mentor is Noble I’m Manu-El:Bey, 69. He has lived in Syracuse for the past 33 years, and he met Bailey’s father in 2000 during a human rights meeting. The two have grown extremely close since, even opening the record label together.

“They would discuss different situations going on,” Bailey said. “The economy, as far as poverty, human rights, the rights of the child.”

Eventually, one of those emails from Bailey’s godfather inspired Bailey to write one of his first singles, “ROC (Rights of the Child),” Bailey said.

“When Mahkai found out that Somalia and the United States were the only two countries that had not ratified the UN Convention on the Rights of the Child,” Bailey’s godfather said, “he as a child lost it. So I told him, all is not lost brother. We can change it.”

Bailey soon wrote another song about strife between police and African-Americans. He titled it, “Michael Brown,” named for the young black man shot by a police officer in Ferguson, Missouri, in 2014.

“My son is not against police officers,” Bailey’s father said, discussing the song. “He frowns upon the ones that are corrupt and are doing things the wrong way. Because you have people being slaughtered by corrupt cops. I’m not saying that everybody that gets gunned down by a police officer was innocent. But there are some innocent ones. And that is scary to a teenager.”

Bailey, who goes by the rap name “Truth Speaker, The Voice of the Youth,” has recorded with Freeborn Music Productions at SubCat Music Studios, located at 219 S. West St. He has released several hip-hop singles about issues involving children’s rights and the police. He also has helped with outreach for a local toddler in need of a bone marrow transplant.

Bailey’s first mixtape, “SoulFoodDaMixtape,” is scheduled for release sometime in May.

Bailey’s godfather wanted to make music with a serious message, focused on human rights and issues important in the African-American community, which is the type of music he persuaded Bailey’s father to focus on, eventually. 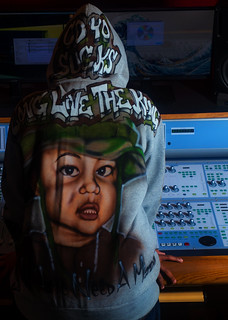 Makhai Bailey wrote a song about “Baby King,” a toddler from the South Side who needs a bone marrow transplant. Bailey wears an image of Baby King proudly on the back of his sweatshirt. | Leonard Adams, Staff Photo

“That’s one of the things that myself and my mentor have been adamant about: changing the way that we deliver this music,” Bailey’s father said. “Because the youth are paying attention, and people aren’t actually conscious of what they’re putting out. So it’s kind of affecting our communities in the worst way. Somebody has to stand up.”

Nevertheless, Bailey’s song about Brown caught the attention of a wider audience beyond youth. Two years ago, when Diana Merritt, a radio host and chief executive of Exclusive Connections LLC heard his track, she immediately fell in love with the concept behind it.
Merritt says she continues to follow his music today.

“He’s somebody that can give a message that everyone can relate to, every genre can relate to his actual music,” Merritt said. “And I think he is going to go far and have longevity because of the concepts that he uses. He keeps a positive mind frame, he explains things that are going on around him and not just things that he thinks are going on, he’s actually in the know and smart.”

Bailey’s music caught the attention of others. About a year into Bailey’s writing and recording music, he performed at The Great New York State Fair last September. The venue, Chevy Court, holds more than 20,000 people.

When Bailey’s father found out about this opportunity, he was excited and a little nervous because just a few months before that, Bailey had experienced his first on-stage performance at Henninger High School, where he is a student.

At the state fair, Bailey held his nerve in opening for rapper Nas.