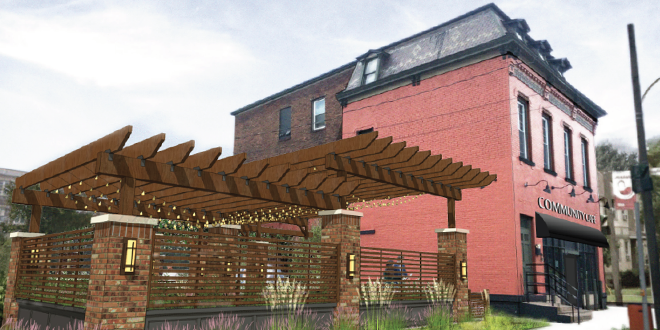 *Editor’s Note: This story has been updated to note nearly $50,000 in funds to construct the outdoor space were provided by the Syracuse Urban Renewal Agency

It seems coffee shop businesses have boomed in recent years here in Syracuse, except in the South Side.

But soon this will change because two coffee shops are in the planning stages.

Syracuse Model Neighborhood, doing business as Model Neighborhoods, plans to break ground later this month on the Community Café at 1555 S. Salina St. while the Eat to Live Food Co-op, which has remained closed since the end of December 2017, hopes to convert its current space at 2323 S. Salina St., into a coffee shop that also sells fresh produce.

The proposed cafes will be less than a minute drive from one another. Both plan to employ local residents, hope to revitalize the area and serve as community gathering places.

The Community Cafe revealed plans for both the interior and exterior, located at the intersection of South Salina Street and East Kennedy Street where a garage was recently razed, during the June Tomorrow’s Neighborhoods Today Southside meeting.

The outdoor area will seat roughly 40; feature an outdoor pizza oven; upgraded lighting, which Angela Wright, Model Neighborhoods’ executive director, notes will make this corridor stand out and slow traffic. Additionally, outdoor seating will include pavers and manicured landscaping. Nearly $50,000 from the Syracuse Urban Renewal Agency contributed to the renovation of the outdoor space.

Capacity inside will hold 70, feature a fireplace and abundant space for patrons. The mixed-use building will take advantage of the city’s new rezoning laws by also offering two lofts on the top floor for artists, who Wright hopes will work with the cafe to create programming for the community.

Additional offerings will include live music, chef nights, programming for youth and allow for the community to rent out the space for private parties.

“Our commitment is to be more than landlords,” said Wright, who has worked with Model Neighborhoods for three years. The cafe will be her nonprofit’s first such community initiative, stressing its creation is an expansion of her agency’s mission, which is “to enhance and build resilient diverse communities, by supporting economic growth, creative community-based initiatives and quality housing services” in the neighborhoods Model Neighborhoods serves.

She says the cafe plans to hire local residents, who will be trained in partnership with the national FareStart culinary program. Both youth and adults will be welcome to apply.

Once opened, The Community Cafe’s hours will be from 7 a.m. to 3 p.m., six days a week. After 3 p.m., the space will be available for community events and private parties. It will serve healthy food, including vegetarian, vegan and gluten-free options. “It will be quality — in meal offerings and service,” she said.

Visitors will be able to enter from South Salina Street and park at the parking lot to the back of the building, which is a shared lot with the residential building owned and managed by Syracuse Model Neighborhood. All traffic will exit onto East Kennedy Street to prevent congestion along South Salina.

Wright said she is still in search of a coffee roaster for the cafe and joked with attendees at the TNT meeting to join her for coffee tastings. The space is also seeking sponsors ranging from the $500 Friend Level to $25,000 Visionary Level. To learn more about these opportunities, reach out to Wright through Model Neighborhoods.

The cafe is Wright’s first step in her five-year community redevelopment plan. She believes the cafe’s opening will be the initial spark for community revitalization by bringing hope to South Side residents and encouraging other businesses to branch out into the community. Her next prediction for the South Salina Cooridor:  an ice cream shop. 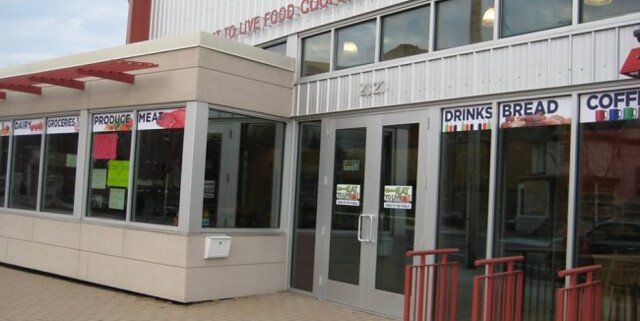 Eat to Live
Board members with the Eat to Live Food Cooperative say a coffee shop is coming to its current location later this summer. But before this opens, board president Tanya Thomas-Edwards says the space will become the newest Food Sense host site. This monthly food buying co-op, run by the CNY Food Bank, is open to anyone who wants to stretch their grocery dollars. There is no requirements to qualify.

South Side Art Mural Project  ::  TNT’s Neighborhood Beautification & Communications Task forces shared updates on the group’s plan to add murals and gateway signs welcoming visitors into the South Side earlier this month. Currently, the bridge at the edge of Taylor and South Salina Street is being prepped for two murals to be painted by London Ladd and Lance Johnson. One mural will showcase Martin Luther King Jr. and on the other side will be Frederick Douglass. Both will feature quotes from each historical figure, taken from speeches each had given while in Syracuse.

Also in May, the team behind the Syracuse South Avenue Corridor Economic Feasibility Study released their draft report, which noted a demand for food options on the Southwest Side, greater neighborhood development and the potential commercial density that could be created by the city’s expected rezoning changes. Some possibilities this report listed included building a gas station at 900 South Ave., converting vacant lots and abandoned buildings into commercial infills and adding green spaces. The report is based on feedback from several community meetings and a community survey, which found respondents desire sandwich shops, a fitness center and a coffee shop as services that should be added to the South Avenue Corridor.