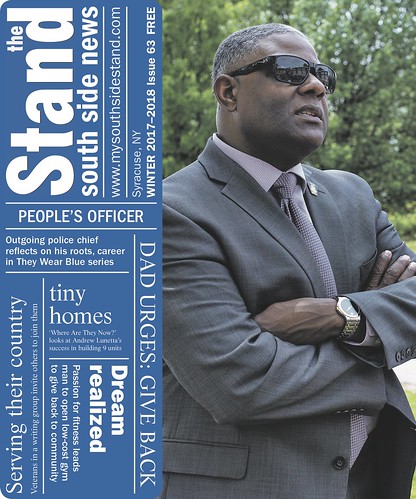 Our winter issue profiles Chief of Police Frank Fowler as part of our They Wear Blue series. Fowler will be stepping down in 2018 when Mayor Stephanie Miner’s term ends and newly elected Mayor Ben Walsh takes the helm. Fowler graced our first cover of The Stand in 2010 shortly after he was named head of the Syracuse Police Department.

For this profile, They Wear Blue reporter Justin Mattingly and photographer Michael Santiago traveled back to Ferguson, Missouri, with Fowler to visit his hometown. In this in-depth piece, Fowler reflects on moments that contributed to his current role and how those experiences have helped him connect to Syracuse residents.

All the stories, photos and videos from They Wear Blue are now available at the project’s web site.

This issue is out now and will be on news stands through the end of January. To download the issue as a full pdf, click here.