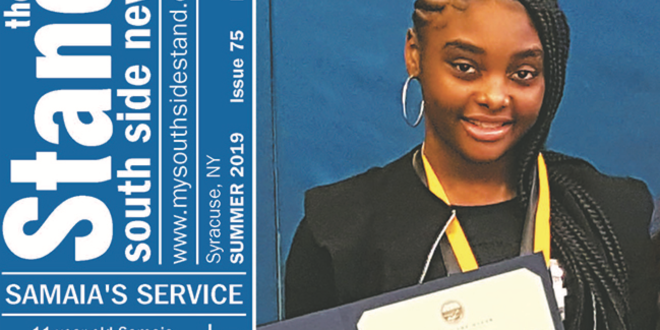 In The Stand’s summer print issue, meet South Side Achiever Samaia Goodrich, learn about the city’s new Bureau of Administrative Adjudication office and get a sneak peek at plans for this summer’s 10th annual South Side Photo Walk set for July 27.

May also marks 10 years The Stand’s Director Ashley Kang has worked with the South Side Newspaper Project. She was hired by The Stand’s founder Steve Davis, board members of this project and the late Newhouse Dean Lorraine Branham, who died April 2 at the age of 66 battling cancer.

Branham led the Newhouse School for 11 years and was a strong supporter of this project both financially and in encouraging student participation. She saw the mutual benefit this community newspaper provides — in-depth stories on the community and real-world reporting opportunities for Newhouse students as well as local high schoolers and community contributors.

This is why our summer issue is dedicated to her memory.

While she led an $18 million fundraising campaign for the renovation of Newhouse II, she also continually supported the funding of this paper and efforts to involve students in community journalism. When chatter would surface about possibly cutting print and making The Stand an online only publication, Branham would hear from readers who appreciated and needed the print version. If that disappeared, their options of reading our stories would also vanish.

The first print version was our March 2010 issue, debuting over Valentine’s Weekend with a launch party where we invited residents to “Fall in Love with The Stand.” That first print issue was produced with four Newhouse students in an advanced reporting course and its cover story featured then newly named police chief Frank Fowler.

For a decade now, we’ve been able to tell stories unique to the South Side. We’ve shared residents’ perspectives on important issues by aiming to put their voices first.

For 10 summers we’ve also trekked through the neighborhood, cameras in hand, to put the people and places here in focus. Images are shared in each September issue, online and some have even been added to the walls of local community spots such as barber shops, the library and laundromat.