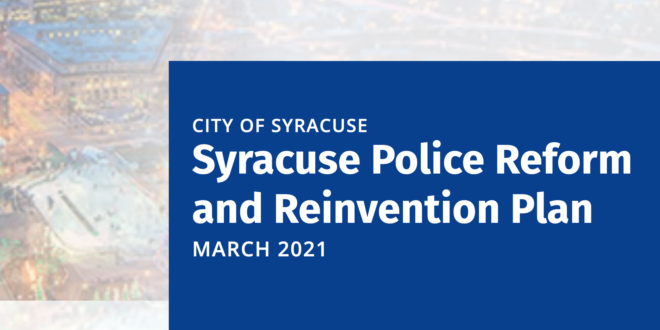 Updates Made to Police Reform Plan

The city of Syracuse released an updated version of its police reform and reinvention plan earlier this week, adding more accountability measures like the creation of an oversight committee that would supervise the implementation of reforms.

The plan — which is set to reimagine local policing and was influenced by a massive national rally to end police violence in response to the murder of George Floyd last summer — follows state executive order 203. The executive measure, according to Deputy Mayor Sharon Owens, calls for a comprehensive review of the department’s policies and deployment strategies, in order to devise a plan that would address particular community needs (as detailed on Page 30 of the plan).

“It would also promote community engagement and foster trust, fairness and legitimacy, and address racial biases and disproportionate policing and communities of color,” she said.

So far, the plan calls for a review of the role the Syracuse Police Department (SPD) plays in the city. According to the plan, this starts with increased accountability measures, such as conducting a press briefing at the scene of a critical incident and following up within 24 hours. Patrol, traffic and school officers in the city are also equipped with body-worn cameras, which is another measure of accountability proposed by the plan (Pages 26-29).

Additionally, police officers must now adhere to the Right To Know Act, which requires officers to identify themselves and provide a business card that includes their name and an identification number (as detailed on Page 67). The measure was approved in December, but has been the subject of controversy this year, as the full implementation has been delayed by SPD until April 1, according to SPD Chief of Police Kenton Buckner. A report on the implementation of the measure should be expected by the second quarter of this year, the chief noted.

Community engagement is another pillar of the city’s police reform strategy, according to the city’s plan. The department has already hired Jimmy Oliver as its director of community engagement, to serve as a link between the community and SPD. He will oversee the development of adult and youth police academies, police athletic leagues, junior cadet programs and police participation in community events (further detailed on Page 54).

Stakeholders are also in the process of reviewing the city’s approach to school resource officers and are set to make a decision on potential changes by June, according to the plan (Page 40).

SPD’s “Use of Force” policy has also been revised to ban the use of chokeholds and to outlaw the use of force as a retaliatory or punitive measure, according to the plan (Page 46.)

The plan underwent a process of revisions after community organizations and city councilors provided input at a Feb. 18 public hearing. The updates were presented to the public at a virtual meeting that included Owens, SPD Chief of Police Kenton Buckner, members of the city’s common council, as well as members of the Citizen Review Board (CRB).

“We heard clearly from the community that a plan is just a plan,” Owens said. “It’s just words on paper, unless there’s a process to ensure that plan remains fluid.”

The deputy mayor added the addition of an oversight committee will help keep the reform and revision plan on track and provide a way to hold stakeholders accountable (as detailed on Page 10).

The oversight committee is slated to be in place before April 30. It will be chaired by Owens, and will include a designee appointed by the deputy mayor, a representative from the Department of Law, a Chief’s Office representative, CRB Administrator Ranette Releford, Syracuse Public Safety Committee Chair Chol Majok and two members of the community. The mayor and the common council will pick the appointees.

“The main focus of the oversight committee is to ensure that we are keeping in step with what we’ve committed to in this plan,” she said, adding that the committee will also make sure to stay up to date with any new piece of legislation that may affect policing in the city. “Then, if there are any needed additions or changes to the plan, this is a process by which we’re vetting that.”

Ultimately, the committee will produce a report of policing outcomes and strategies for city and community stakeholders, Owens said.

Seeking alternatives to policing, Owens said, is particularly important to include in the city’s redefining of police-community relationships. The city has identified situations eligible for non-police response, including homelessness, non-criminal mental illness, noise violations and traffic violations, according to the plan (addressed on Page 37).

“Recent events have shined a light on the importance of that particular topic area,” Owens said. “The city cannot do that in isolation. So we are absolutely connected with Onondaga County (Department) of Mental Health and the bevy of organizations that work with them to begin that process.”

The county’s Crisis Intervention Team (CIT) is working to develop a framework for mental health crisis response teams and strategies for 911 dispatch, the plan states, adding that the main goal is to train for “informed, safe encounters with citizens with mental health afflictions, substance use disorders and developmental disabilities.”

Councilman Michael Greene noted concerns about police response to calls regarding the city’s homeless population, asking if officers should be dispatched to those types of calls at all.

“That’s why it is imperative that (911 dispatch) is a part of this discussion,” Owens said in response, noting that the dispatch center can act as a “gatekeeper” in order to figure out what agency is best suited to response to a specific situation. “They’re on board. The question is figuring out the training that’s needed and they’ve already met with the Broome County 911 to talk about their system and how they do it.”

While a reimagined approach to policing is at SPD’s forefront, Buckner said when there are doubts about the circumstances surrounding the call, he anticipates officers to still be able to respond to situations even in a limited capacity.

“There are certainly instances when we probably could be better stewards of our resources by ensuring that that initial call gets all the appropriate information and the appropriate people are initially dispatched,” Buckner said. “With the understanding that when there is an unknown, more often than not, police are going to be a part of that response.”

A preliminary phase of this portion of the plan will launch in April, which Owens said will give involved agencies the opportunity to collect data and assess the effectiveness of the program.

On the matter of transparency of accountability, a newly added stipulation to the plan also calls for the creation of a “public facing dashboard containing citizen complaints and officer disciplinary data,” Owens said. This feature is scheduled to launch in the second quarter of this year (Page 64).

In its current stage, the plan is a guide to policing actions and should not interfere with  existing legislation, according to Syracuse’s Corporation Counsel Kristen Smith.

“We can’t use this plan as a way to directly change the law,” she said. “We can say in the plan that we would like to see the law change.”

“It comes across a bit, not from here, but even (at the state level) a bit disingenuous, because the way it was communicated was to suggest the local legislators had the final say in whatever the outcome was in their respective districts,” Bey said. “It’s in a lot of ways maybe more ceremonial than anything.”

Bey expressed his frustration with the plan, noting it is mainly “structural in terms of operation.”

“The laws in place that people have expressed concern with, or the state laws that allow — with all due respect — some of the abuses that we’ve seen over the years, they’re not in any way impacted by this effort,” he said.

Another measure of accountability in the plan is the inclusion of community input in SPD’s officer hiring process. A panel of five-to-seven community members will meet the candidates and submit questions to the hiring prospects, according to Buckner (Pages 74-75).

“Then I will consider (those questions) and the totality of circumstances before we make our final decision as to hire or not hire the individuals. It will be at the end of the process,” he said.

Ultimately, Buckner noted the plan will continually be updated to reflect the community and the city leadership’s input.

“We expect flexibility,” Buckner said. “We still expect changes down the road. It will remain an inclusive process and one that takes into consideration all vested parties. That’s the only way that we’re going to be able to sustain a buy-in from the community and the leadership, as we continue to hear those voices.”