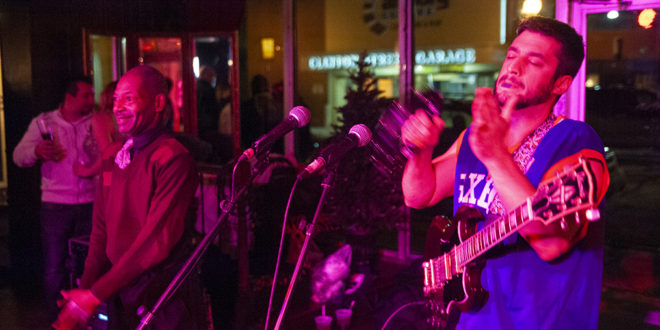 Eli Harris, who died last week in a hit-and-run accident, performs with Joe Driscoll in 2014. Driscoll, a longtime friend of Harris, organized an online concert in Harris' memory Wednesday. Tonight a virtual eulogy begins at 7 p.m. | Photo by Ben Cleeton

The public is also invited to view Harris’ funeral services remotely at noon today. More information can be found here.

Due to the current crisis, Driscoll says fans of Harris are unable to gather and honor his life. So instead, Driscoll organized an online show with eight additional local musicians to perform original songs by Harris and honor his memory. Driscoll also set up a GoFundMe page in Harris’ honor.

By now, you’ve heard the advice that to slow the spread of coronavirus, we need to practice social distancing. Here are things you can do to stay connected locally by going virtual and some examples of efforts some local residents have tried.

• Since this crisis has put a stop on South Siders’ nigh lives, Timothy Kirkland, aka D J Big Boy, has gone live to dj with Exit 17 Podcasts for thousands of viewers.

Kirkland isn’t just a DJ who brings entertainment to the local clubs and bars of Syracuse, he is an entrepreneur, motivator and community leader.

He’s also a South Side native.

This week, he’s organized a tribute concert with other local musicians to honor the memory of Eli Harris.

• View “The Stand  ::  10 Years in Print” photo exhibit on Instagram now that Syracuse University’s Warehouse building is closed until further notice. The building announced the closing starting 5:30 p.m. Monday, March 16, as a measure to prevent the spread of COVID-19.

The photo exhibit is up for the month of March to celebrate The Stand’s 10th year in print. It features a selection of images from our 10th annual South Side Photo Walk held July 2019 along with a collection of photos from the past decade — one for each year the paper has been in print. We’ll now share all the images featured on our Instagram feed, so check back each day to view an additional image and read the story behind it.

• You can also watch a treasure-trove of local videos on the National Press Photographers Association’s Multimedia Immersion Vimeo page. This Video Storytelling Workshop held each May at the Newhouse School also celebrated 10 years of being hosted in Syracuse last year.

Multimedia Immersion is an intense, five-day, hands-on training workshop for visual journalists looking to expand and grow their multimedia skillsets using the latest technology with a focus on mixing photos, video and audio content edited into multimedia presentations. Each participant – ranging from multiple Pulitzer Prize winners, Best of Photojournalism winners, White House photographers, academics, editors, students, and working professionals and freelancers – takes on a Syracuse area story, including several subjects from the South Side.

• Consider visiting the Morningside Cultural Trails (MCT) – in person or virtually through StoryMaps. You can toggle between the tabs to switch between the four different trails.

The MCT Map is both a tool for local explorers and a guide for city tourists. It is a collection of four different maps, each with a unique story. The Red Trail, or simply, the Morningside Cultural Trail begins in Barry Park and ends at the historic Oakwood Cemetery. As you follow the trail, you can explore local landmarks such as the Morningside Community Garden and the Islamic Society of Central New York. As you travel from Barry Park on the Morningside Cultural Trail, you may soon reach the Edward Smith Stairs Trail (Orange). The Ed Smith Stairs trail is unique for its exploration of a nostalgic stairway leading to Morningside Heights Park.

• The Onondaga Historical Association offers several ways for those who still want to engage but are practicing social distancing. Stream any one of OHA’s videos and movies, including Emmy Award-Winning “Let ‘Em Know You’re There,” available on Amazon. This documentary is on Jim Tucker of the 1955 Syracuse Nationals NBA Championship team and who held the record for fastest recorded triple-double in a game in NBA history for 63 years.

• While all public libraries in Onondaga County have been closed since either Monday evening or Tuesday, you can still do a lot online. The library systems shares that with your library card, you can: Search a database, learn something new on Lynda and find a new ebook to read.

At the end of March, Onondaga Library announced Syracuse residents who didn’t have a library card before Covid-19 can apply online now to gain access to online content, including downloadable & streaming ebooks, audiobooks, videos, music & more.

If you have something to add, please share. Email ashley@mysouthsidestand.com.